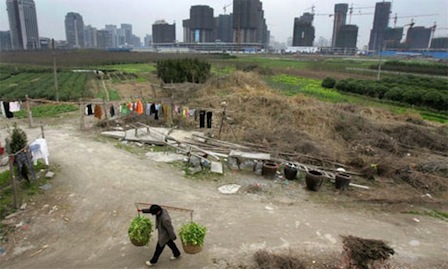 Hundreds of villagers just south of Kunming took to the streets this past weekend to protest what they are characterizing as unlawful land seizures. More than 700 residents of Guanji Village (广济村) marched along a highway carrying signs and shouting slogans in an effort to raise awareness of their situation, Radio Free Asia (requires proxy) is reporting.

Farmers in the predominately Yao minority (瑶族) town, unhappy over proposed resettlement payments for their land, began petitioning the local government last year. At issue are 667 hectares of farmland on which developers plan to build a resort inspired by the ancient Dian Kingdom. The local government has pledged to pay a total of 120,000 yuan in compensation for the land.

Farmers working the property counter that the proposed payment is far too low. They claim vegetables grown on the disputed farmland generates roughly 30,000 yuan per mu (亩) annually.

Tensions have escalated recently as farmers assert they have been intimidated by construction crews. A man surnamed Li told Radio Free Asia that several villagers have been assaulted and said the resort construction company and local government are colluding to defraud people of their land.

In response, residents of Guanji Village have begun to patrol their farms around the clock. Accordig to Li,

The construction workers [...] were hired by the government, and they were trying to get onto our land to take it over. We are watching over the land in shifts, several hundred of us. We have beaten back the construction workers. But if they send even more people in, I think it will be hard to avoid bloodshed.

Disputes over land slated for development are nothing new in and around Kunming. Hundreds of shopkeepers were dispersed with tear gas in 2009 when it was announced the old Luosiwan wholesale market would be demolished. One year later a massive development project around the northern tip of Dianchi Lake was scrapped due to local action over resident relocation schemes.

it's surprising that you're able to report this here, but nicely done. human greed is a wonderful thing to behold!

In the future we'll look back at the great residential constuction boom as another way the rich took away everything from the poor villagers.

Mao must be turning in his grave....

why don't they just give them another spot of equal size land somewhere? or are we running out of land? what are we going to eat when all the land is replaced with highrises? sawdust? the diet of the future - exhaust fumes and sawdust.

@mike4g_air It's made possible by land swaps — this recent Sinica podcast gives a pretty good introduction to how they work, and how local officials use them to screw farmers.

667 hectares... 120k... you must be joking. That's a ridiculously low amount, 180 kuai per hectare which normally gives income of (according to their numbers) 500k of income per year. They need to add 2 more zeroes to that number if they aren't giving them similar land elsewhere. Do they also live on this land?

Maybe it's 120k per villager? Even that seems pretty low....

Radio Free Asia is vague on this point. The passage reads:

"Qi said the local government's promise of 120,000 yuan in compensation for the lost farmland wasn't enough to replace the villagers' livelihood."

I took that to mean total compensation because "villagers'" is a possessive plural. Sorry for the confusion. I will look for clarification.

Does Yunnan really need more modern Chinese corruption-money-millionaire visions of grand resorts? I have just been down at Chengjiang area and Fuxian lake is being destroyed by them as well. To say nothing of the land-hungry golf courses.

The government should halt land theft. This affects all of Kunming who will suffer increased pollution and poor health since fresh food will need to be transported from further afield, concrete runoff from more construction will further pollute Dianchi Lake, and the historical topography of the Dian kingdom becomes invisible to a cloud of northern Chinese skyscraper bling bullshit.

You should see how badly they've fucked up Jinghong, I'm surprised there haven't been riots or organized armed incursions from the Shan states.

@ Voltaire. You're totally right but the sad reality is that Government is business, business is Government.

Who's going to stop Whom?? They all shout, Ride the wave!!!

environmental concerns are in direct conflict with GDP. so for this problem to be addressed, the whole financial system would have to be revamped. you can't buy stocks and expect 15% returns and worry about the environment. I think it was Bhutan that measures GNH (gross national happiness?) rather than GDP. Haven't been there. Not sure how it's working out for them. I think it was the president of Bhutan who also suggested that humanity is on a suicide path :)