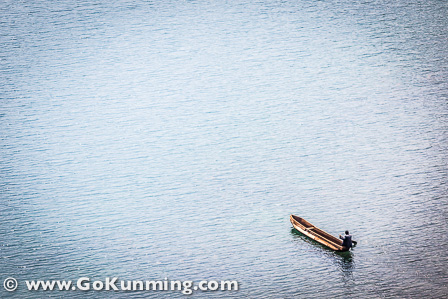 Editor's note: All pictures for this article were taken by photographer Yereth Jansen on his last journey to northwestern Yunnan.

The announcement a week ago that construction of the Lugu Lake Airport has been delayed for the past three years was good news for some and bad for others. For the staff at GoKunming it was a bit of a downer.

Like many of the best natural settings in Yunnan, Lugu Lake (泸沽湖) is bit difficult to reach. From Lijiang it is still accessible only by roads that have a nasty relationship with the elements and are sometimes best accessed by motorcycle. That is set to change next year when the airport will presumably open its doors.

We put together some of our favorite shots from a past visit to Lugu Lake to show what it looked like then, and what it may not resemble in the near future. Hopefully someone will see the lake as a place not only to be admired but also preserved. Jiuzhaigou in Sichuan would be a good model. 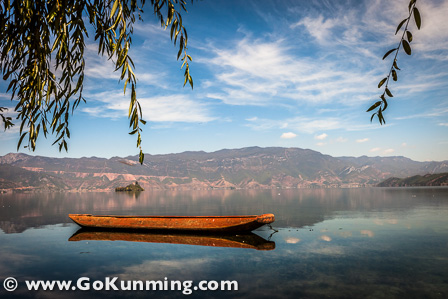 Arriving by bus at Lugu Lake from Lijiang we were dropped at a long shoreside boulevard that constituted the town of Luoshui (落水). The road was lined with small shops, restaurants, guesthouses and homes, all with wonderful views. 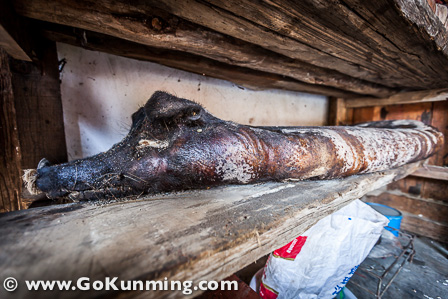 Inside a courtyard home we snapped pictures of local architecture. Peering inside a tiny outbuilding we stumbling upon one of those strange sights only found in Southwest China: a flattened and preserved pig. 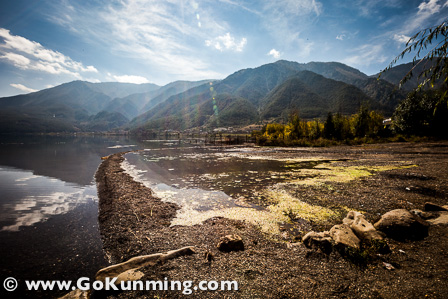 Lugu Lake does not offer much in terms of sandy beaches or crazy nightlife. The boulevard and village ended unceremoniously at the lakeside. Except for a small dock with boats bobbing gently in the water there were no other signs of people. 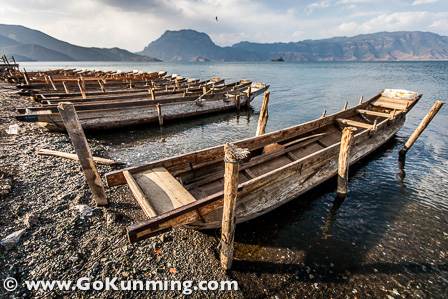 When we were there boats across the lake to the Sichuan side cost 80 yuan and prices have reportedly risen to 120 yuan per passenger. The boats were solidly built with flared bows that kept them from tipping when waves begin to swell. 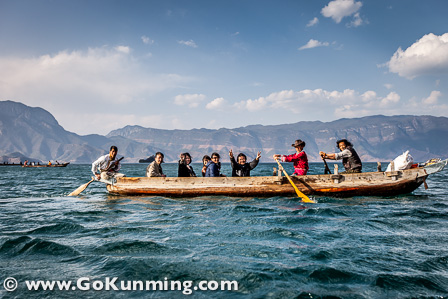 We were not the only people on the lake but boat traffic was light. A group of tourists traveling in the opposite direction were obviously enjoying themselves immensely and flashed peace signs when we raised our cameras. A trip across the lake takes about two hours in good weather. Once the wind began to blow our guide had to strain against the waves to make any progress. Waves started to splash over the sides of our boat and we ended up baling water with a conveniently placed Coke bottle. When we neared the Sichuan side of the lake the wind died down and our progress sped up. In calmer waters near the shore we could see rocks on the lake bottom. Lugu Lake is famed for its clear water and is reported to often have underwater visibility of 10 meters. On the Sichuan side the shore is a bit more swampy and the boats looked a little less seaworthy than the one we used for the crossing. Nonetheless, they were stacked with baskets of haicaihua just pulled from the water. When we were there the Sichuan side was much less developed than the opposite shore. Goats wandered freely around town and took precedence over cars on the road. They also reminded us it was time for dinner. We had a simple meal in a quaint wooden restaurant overlooking the lake. The views were fantastic and the yuxiang qiezi was delicious. Sunset over the lake provided more photo opportunities. People walked down to the boardwalk to catch the last views of the day before night, and its accompanying chill, settled over town. The next morning we decided to go for a hike to shake off the cold. It was a hazy day as we wandered up into the forested hills. There were several paths but the undergrowth was sparse and we could explore wherever we wanted. After hiking for a few hours we were rewarded with a bird's eye view of the entire area. We were also alone in the woods and spent much of the afternoon enjoying the views. We crested the hill and walked down to a secluded bay. A simple inn sat on the lonely shore. Dinner was served outside under starlight and the silence was almost complete.

Thanks Pat and Yereth for a nice article with lovely photos...
Let's hope the delay in building the airport will give everyone planning the future of Lugu Lake more time to consider the environmental concerns.
It truly is a treasure.
Nevada

Is there something wrong with the wording in the opening paragraphs?

@Ocean: wording has been changed for clarification.

I don't know when you went to Luguhu but the road between Lijiang and Lugu has improved enormously over the last few years and the new road between Lugu lake and Ninglang has been completed and is now one of the best roads in Yunnan. From there the road is the old road to Lijiang and a bit congested at certain spots. Indeed just outside Lijiang the road is a total mess because of road-works. The old road is completely destroyed by heavy trucks here going between the cement works and Lijiang (A common problem in China; modern trucks can carry more load then the road have been designed and build for and therefore destroy the roads).
I travelled this road earlier this month and it took me 5 hours to cover the Lugu Lake / Lijiang distance. Once the road works have been completed it might take 4 hours. That is half the time it took me in 2009.
Travelling from Xichang in Sichuan still takes a full day and from Chengdu I would do it in two days. (Many road improvement works here as well.).
Your statement that "the Sichuan side was much less developed than the opposite shore" I cannot agree with. On the contrary: Apart from Luoshui (The only village at the lake) the Yunnan side has hardly been touched by tourism while the Sichuan side has seen rapid touristic development.
One of the nice things of Lugu lake is/was that it is less over-run by tourists. Something that spoiled it for me in Lijiang and Shangri-La. A new airport will hasten the process of it becoming one more of the "shopping mall" tourist towns like Lijiang. Already now I noticed that more and more local business women (The local Mosuo culture is matrilineal and this mend that most shops, restaurants and hotels were owned and run by women) have been replaced by outsiders (Mostly Sichuan businessmen) and that part of the atmosphere has gone.
Note as well that the area has an access fee of 80 RMB per person.

I am going to Luguhu during January.

@scally
Don't wish to be a pedant, but the wording of the opening paragraph is still wrong. The announcement a week ago was that construction was finally beginning, not that "construction .... has been delayed for the past three years". Just saying...

Hi! Tks for the article and for the infos. Do you know of it's possibile from lugu hu to come back directly to kunming without stop in lijiang? Thanks!