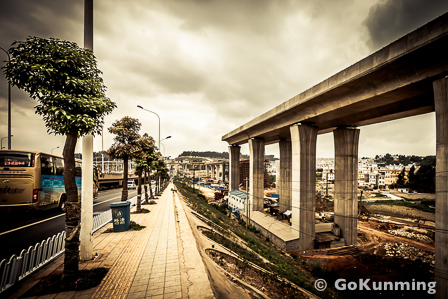 Detours and blocked off streets have become commonplace in Kunming due to construction on the subway system. It appears Spring City residents can look forward to more of the same for years to come. Today government officials announced plans for eight additional subway lines, Kunming.cn is reporting.

Designs for the newly announced lines have passed a government mandated audit process and been approved. The eight proposed lines more than triple the total length of the planned intracity railway.

The original six lines were projected to stretch 162 kilometers at a projected cost of 35 billion yuan (US$5.6 billion). The 14 track network is now planned to span 562 kilometers. Routes and timetables for completion of the expanded project have not yet been made available to the public.

Kunming's urban rail network opened its first stretch of track earlier this year to coincide with the debut of Kunming Changshui International Airport. Metro Line 1 is expected to open in two separate phases. The first section, running through the city's southern Chenggong New District, is expected to go into operation at the end of this year.

The northern portion of Line 1 will be completed and operational in January 2013, five months ahead of previous forecasts, according to the report. In preparation for the opening, next month Kunming will receive shipment of 20 trains destined for service on Line 1.

Completion of the first six metro lines is slated for 2018. To see an unofficial subway map making the rounds on social media, click here.

They really need to get the Bei Jing Lu lines going already. That's like a main artery into the center city.

The Chinese government come in for a lot of stick over many issues, but we from the west can only dream of getting projects such as these up and running in the time frame that they are able contemplate.

The link for the subway map is only accessible if you are logged into Weibo. My apologies.

Yep, my opinion is they should get the lines they have under construction up and running ASAP before starting new ones... else they will potentially strangle the cities streets through construction everywhere. As these are 3-5 year projects, that sort of time frame can have a major influence on traffic (be it vehicular or foot) patterns, hence living standards/patterns and business profitability. Essentially they can strangle a city. Already we have parts that have been under construction and are now still blocking the traffic when it appears they could easily open them - obviously just a few finishing touches before it needs opening. My experience is that Chinese construction companies are great at starting construction and getting it almost finished really quickly, but things seem to stay in an "almost done" state for an extraordinary amount of time. All the construction people seem to move off to do the next big thing...

I was hopeful this wouldn't be the case with the subway, but cycling around I see numerous spots that probably could be open, the roads are asphalted and everything, they just haven't painted them or put in curbs yet etc etc. It seems everyone has just abandoned these sites with them 95% finished. Can anyone actually confirm that? It is possible they are actually still working underground, or are having to do xyz to enable them to put the finishing touches on.

@blobbles
those are probably seperate stations. They would need the following and previous stations on the line ready to be able to open the spots. It would be fun if we'd only get to enter the train and exit at the same station without it moving :D
After the lines open, I will probably wait one month before riding the train though, just go make sure things are safe

@blobbles, i have also noticed all the nearly completed projects and their are no signs of anyone working on project while commuters struggle around barricades. They have made patches in road where they are working on subway in north beijing lu and yesterday i saw a small car get stuck in one of the holes left behind. Thing i have found most amusing is on numerous occasions road my bike down a small dirt road only to find a brand new stretch of 6 lane road with curbs, striped and road down it for 5-6 miles only to find it ends with a 1 lane dirt road. Asking local friends no one has any idea why the road was built and many had no idea it even existed. My biggest fear with subway is it will become as dirty as everything else in china. Would be interested in hearing if anyone else has used subways in other chinese cities and what experience has been like.

Yep, some of them I think probably are. The parts I am mainly talking about though are the same ones tallamerican is talking about - big patches of road that are flat, ashphalted but look just to be missing their finishing touches. Maybe they require another govt department to do these last touches in order to reopen the roads/footpaths etc, and its not on that govt departments job sheet for a few months.

I have been on Shanghai, Guangzhou, HK and the new Chengdu subway. All were almost certainly better than those in the west (well, in Italy/Spain/England - the others I have been on), probably just due to them being newer and therefore using more modern tech. The HK ones are usually the cleanest (everything is clean) but the Shanghai one is basically to the same standard as HK (except the toilets are cesspools again). Guangzhou is a little bit worse than the previous two but not by much in terms of cleanliness. Chengdu was brand new so hard to tell at that stage...

The subway systems in Shanghai and Beijing are very good by international standards. They are clean, reliable, extensive, and modern (although I was only in Beijing two weeks and Shanghai ten days). At rush hour the subway tends to get packed though (maybe London is the only place I've experienced anything similar). Somehow a packed train in Toronto or even New York doesn't feel as packed as Beijing/Shanghai.

If the Kunming subway is anything like Beijing and Shanghai it will be fantastic.

My only beef with those subways is that you often have to walk 5+ minutes to make a transfer, but the subway map doesn't make it clear where the transfers are on top of each other and when they are far away.

The only other city I've ever been in with transfers that are consistently as far away is New York, but at least there you can tell by looking at the subway map where you will need to walk a few minutes.

Well, nothing in Kunming is anything like Shanghai or Beijing. Don't expect it to be anywhere near as good.

I know of only one convenient yet extensive light rail system so far, and that's Berlin's. Almost all of the time your connection arrives at other side of the platform you arrived at, only in some cases do you have to take a flight of stairs and almost never do you have to walk over 2 min.

I don't expect that to happen here though.

You may call me for dwelling on semantics, but sometimes semantics are important.

I've always thought it's stupid that the Kunming government referred to the original six lines of its planned urban mass transit system as "Light Rail". No, it's not. Light rail systems primarily operate at street level, and are not grade separated (meaning cars and other cross traffic are controlled so that light rail vehicles can cross intersections unobstructed).

Kunming's original six lines are an real, honest to gosh subway system. Yes, the majority of the track is actually above ground. Only the lines in the city center are underground. In the suburbs they run on elevated viaducts. Being part underground and part above ground does not mean it is not still a subway system (or a "metro" system as it is called in some cities). The New York Subway has massive sections above ground as well, but they are still called the New York Subway.

Now that they have announced that the 8 new lines will become Kunming's "subway" it makes the original light rail moniker all the more ridiculous. What's the difference? They should just call the whole 14 line system the Kunming Subway, or Kunming Metro.