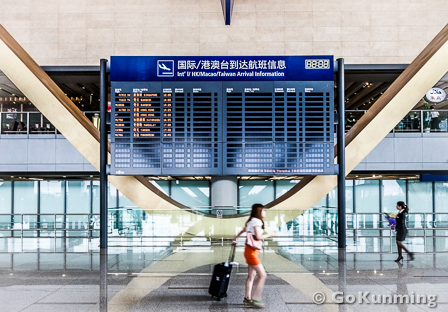 On October 23 budget airline company AirAsia (亚洲航空公司) announced direct flights linking Kunming and Kuala Lumpur, Malaysia. The Spring City could have been enjoying the fruits of this relationship for several years already were it not for some unfortunate missteps.

Kathleen Tan, now an AirAsia executive, first came to Kunming on business three years ago. She was sent to secure rights for the fledgling company to use Wujiaba Airport as its first portal in China. She was not successful.

"My first visit to China was so horrible I could write a book," Tan told an interviewer in 2009. Her meeting in Kunming did not go as planned. According to the report, Tan was not met with enthusiasm:

In halting Mandarin she did her best to introduce the unknown carrier to a room of 15 chain-smoking executives at Kunming airport, who were bent on holding their own side conversations.

Tan took her proposals to Xiamen instead and there signed a deal that allowed AirAsia to operate in China. Today the company has 24 routes servicing China, including the newly added flight from Kunming to Kuala Lumpur. According to Tan, AirAsia is now the largest foreign-owned carrier in terms of capacity into the mainland.

The newly-announced Kunming-Kuala Lumpur flights were initially offered at a promotional rate of 88 yuan. Prices for one-way tickets have since risen but as of this writing were still steeply discounted.

The route, which goes into operation December 10, will use Airbus A320 planes that seat 180 passengers. Flights will depart from Kunming Changshui International Airport four times each week on Monday, Wednesday, Friday and Sunday.

Is the flight to Vietnam just suspended or cancelled?

I heard the Vietnamese changed to Chengdu as Kunming was too expensive.

Interesting. In Bali right now, just checked that out, couldn't find a fare that cheap from KL to KM over the next couple of months. Maybe expired or sold out already or just a very short-range of dates. Anyway, good to know there's flights.

I know an absolutely exceptional and cheap hostel in KL... folks interested can email for details.

There are flights around 183-193y one way left. Look in January.

Air Asia, being a budget carrier, adds on other costs while booking flights, including for luggage, meals, insurance, and credit card payment.

There was talk also of having flights from Bangkok to Kunming and possibly Lijiang with Air Asia.

The new flights are likely to increase visitors from Malaysia and those using the Air Asia network for cheap travel. On routes where Air Asia already flies into China it has meant that the Chinese airlines have had to reduce their airfares to compete.

Ms. Tan's experience with Kunming government slogs sounds about right. She SHOULD have started with QiuHe first, THEN gone to see the chain smoking slogs - QiuHe was a kick-ass government leader - he got stuff done (just look around).

Regretfully, Ms. Tan experienced one of Kunming's OTHER cultures - malaise.

Just got back from Xiamen. That is a well run town. No wonder Ms. Tan ended up there first.