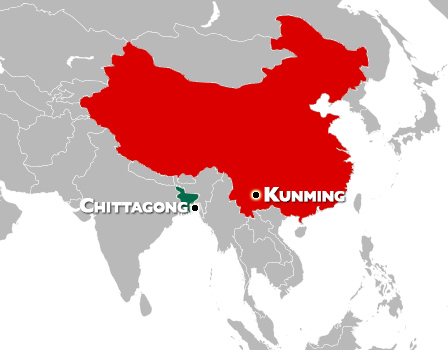 Ongoing efforts to connect Kunming to markets in India and central Asia took an apparent detour yesterday in Beijing. China and Bangladesh tentatively agreed to construct a road and railway system linking Kunming and Chittagong, Financial Express is reporting.

The proposed transportation route, called the Ctg-Kunming Road and Railway Link, could be a boon for Bangladeshi infrastructure and trade. It would also provide a cheaper alternative than is presently available for shipping goods between China and its western neighbors.

Currently, the only transport options from Southwest China to Bangladesh and India are costly air shipments or long sea routes. Shipping by sea requires freighters to pass south of Singapore and through the US-patrolled Malacca Strait. Building a road and rail system to Bangladesh would cut the trip by thousands of kilometers.

Thursday's agreement may have political ramifications for three of the most populous countries on earth. The tentative understanding with Bangladesh undercuts years of slow progress between China and India to rebuild the Stilwell Road, which once connected Kunming to the northeast Indian state of Assam.

Completion of the Stilwell Road has hit repeated snags over the past five years and it appears China may be looking elsewhere for trade connectivity. Although the 600-kilometer Chinese segment of the road is finished, the Indian government has yet to finish its relatively small 60-kilometer stretch.

The Kunming to Chittagong link was brought up during a meeting between Chinese Vice-President Xi Jinping (习近平) and former Bangladeshi Prime Minister Khaleda Zia. The two also discussed increased political and economic ties between their respective countries and Xi indicated China would increase its aid programs to Bangladesh.

In addition to the rail and road link, Xi and Khaleda spoke about bilateral cooperation to build a deep water port in the city of Sonadia, 140 kilometers south of Chittagong. If built in conjunction with the Ctg-Kunming road, it could bypass the Malacca straight entirely.

I'm puzzled. There were several comments on this article when it was first posted, now there are none. Where did they go?

AlPage48: The poster requested deletion of their first comment in their second comment. As there was no ongoing discussion related to those comments, we decided to comply with the request.

I is amazing that these stories keep popping up. The statements are pure political and have no relation to real life.

Any road or rail-link would have to go through Myanmar and anybody who has ever travelled through the north of Myanmar knows that the whole thing is utopic.

There are simply no proper roads in the north of Myanmar. The roads that are there are built more than half a century ago and in appalling condition. Elephants are used to pull vehicles through the worst spots. The reason why these roads are bad is because this is what the local powers that be want it. Better roads would facilitate the movement of the government army and the local 'rebel groups', for their own safety, don't want that.

The government of India don't want it either and well for three reasons: 1. Better roads, or roads at all, in Nagaland would make it possible for the Naga who are in opposition to the central government to easily flee into Myanmar (Nagaland is on both sides of the border.)(Be aware that all the border provinces in India in this area are so instable that foreigners are not even allowed to go there) 2. The road leads from the border through Assam through an area where local opposition groups close of the existing roads for more than a hundred days per year. To put pressure on the central government they declare "ban's" which are general strikes and anybody moving on these days is likely to get his vehicle burned down. More traffic on the road gives the opposition more power and the government of India would have to allocate more force to control the area. 3. A direct trade link with China would swarm India with Chinese products (Chinese products are cheap and high quality compared with Indian products). This thus leads to big opposition from the local industry and trade.

Optimist will make a point that there is a pipeline (Still under construction) from the Bay of Bengal in Myanmar to China so it is possible. Well indeed in this case but the main reason is that Myanmar exports it natural gas from their off-shore fields in the Bay of Bengal to China through this pipe. This forms the single highest export and source of income for the Myanmar government and therefore they are willing to put the extra security in place. What helps as well is that the pipeline is much further south and passes through less instable area.
In short "don't keep your breath".

The article states that 600 Km in China has been finished. However 156 Km still has to be done. It took 12 years to build the 265 Km stretch from Dali to near Longling. This with plenty of money from the Go West development program. It would be another 1000 Km to Bangladesh.

At this moment there is not a single road between Myanmar and Bangladesh. One reason for this being the dispute between the two countries and the Rohringya ethnic group issue in the area.