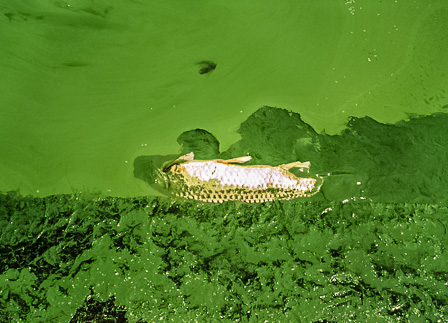 Usually people try to pull fish out of the water. Yesterday more than 100 people gathered in Haigeng Park on the shores of Dianchi Lake and dumped fish into the water. The self-described environmental activists unloaded five tons of live fish in an attempt to replenish populations in the lake, Yunnan Net is reporting.

The group raised 30,000 yuan from small individual donations in order to buy the fish. Their goal, according to an organizer surnamed Wang, was to "protect the environment while increasing wildlife" in Kunming's befouled lake.

The activist ceremony may have been a largely symbolic act aimed at raising awareness of Dianchi Lake's declining fish stocks rather than a solution to the problem. Whether the newly-added fish will survive is unknown.

The five tons of fish added by the activists is only a tiny fraction of the 5,000-10,000 tons that fishermen reportedly caught during a recent 16-day fishing season. More than 4,000 people participated when a three-year fishing ban was lifted during National Day.

From September 25 through October 10, anglers with proper licenses were allowed to commercially fish on Dianchi. The lake has been closed to fishing due to concerns that aquatic populations were rapidly on the decrease from years of water eutrophication.

Billions of yuan have been spent on lake rehabilitation efforts that have ranged from closing nearby factories, creating surrounding wetlands and introducing invasive species. Dianchi has been suffering from algae blooms that are destroying the lake ecosystems by depleting the water's oxygen content since the 1980s.

The activists may also have inadvertently upstaged local authorities at the Kunming Dianchi Lake Management Bureau, who plan to introduce 200,000 carp into the lake over the next two months. An annual fish release event is organized by the Kunming government and to date has released 500 tons of live carp, but yesterday's citizen-organized version may have been the first of its kind.

uhm, I thought the water in Dianchi was rated unsafe even for industrial use. Why would they let people fish there? Celebrate National Day, and get cancer free... glad I never eat fish in Kunming.

Water quality is not safe for agriculture yet they allow commercial fishing?

Which officials allowed this commercial fishing? I understand the need to please the fishermen but this is totally irresponsible for public safety.
When is the government going to be serious on food quality?
Call Beijing!!!

On 2 occasions I saw a local guy selling a single fish on the road side at the bottom of Xi Shan, a large 2 to 3 kg yellowish green fish with swollen black spots all over ....it didn't look healthy.

With the greatest of respect, a noble effort.
But here is the issue. Dianchi is sick. Sick from too much nutrient and particularly phosphorus which is causing eutrification by excess algae. Some real work has been done to reduce the inflow of pollution by relocating factories, farms and housing away from the catchment, for this, Kunming needs a big pat on the back.
But, the nutrient loads remain in the lake. The established water plants and wetlands have some effect but what is required is the removal of phosphorus via Phoslock. What some may be interested to know is that there is a Sino Australian company based near Haikou,on the shoreline Sth West Dianchi which produces Phoslock, a CSIRO developed water treatment agent.
Now this factory was established first to treat Dianchi and second, export to world markets. Truth be known, very little has been produced and applied to the lake.
Well, there is light on the horizon; Xi Jingping is firmly commited to allocate funds to restore water quality to the fresh water lakes in China and no doubt Dianchi will benefit.

I agree there has been a lot of effort to clean up the lake, the introduced water hyacinth ( floating plants) are absorbing the surplus of nutrients and then the plants were to be removed out of the lake and disposed on land somewhere...
But..
The opening of the fishing industry is crazy..

@mike4g_air, Hopefully the water hyacinth was already present and is merely being encouraged under the government program, rather than having been introduced into the lake: it is an invasive species and driver of eutrophication in its own right.

I think it was introduced, and they were going to harvest it and take it away.
I could be wrong, but they then found that they did not have a method to take it all away. It just ended up rotting and stinking on the shore last year.

The history of the water hyacinth use in Dianchi reads like a school science experiment.
Water plants do have a place in the remediation process....if they are managed correctly. This is a popular concept with established wetlands as nutrient sinks.They will take up the nutrients as they grow but then have to be physically removed and processed into mulch, fertilizer or even low grade stockfeed. But they cannot be left to rot in the lake or else the whole nutrient cycle starts over again.
The density of the cover of waterplants also has to be carefully managed or else too much shading and oxygen depletion occurs and as Dan correctly states, they can be a problem.

Even with the best management processes, water plants merely make a very minor dent in the total nutrient loads and, with the basket case that is Dianchi, are at best a tiny contribution to the remediation process.