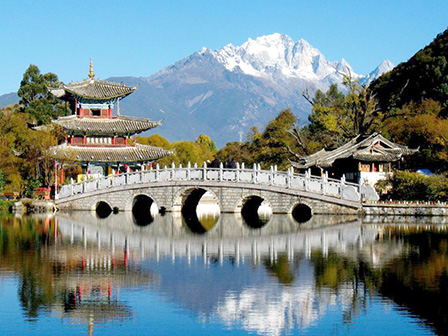 Once a sleepy town hidden away in Yunnan's Himalayan foothills, Lijiang has become the top destination for domestic tourists in China. According to a report released by travel website Mango.com, Lijiang beat out Xiamen, Sanya, Phuket and Pattaya in terms of flight and hotel reservations this summer.

Hotel bookings were up 360 percent over the same period last year. Although Lijiang Old Town (丽江古城) has a population of only 140,000, it has been visited by more than eight million tourists so far this year. Those tourists have reportedly generated 10 billion yuan (US$1.6 billion) in revenue for the city.

Travel analysts believe these numbers will continue to climb in the future as long as Lijiang is seen as a cheap alternative to beach getaways like Xiamen and Sanya. In order to take advantage of the influx of travellers, the city is upgrading its airport and introducing new flights.

The city's Sanyi Airport (三义机场) currently has outbound flights to 12 domestic airports. By 2015 it plans to have routes servicing 35 Chinese cities and five international destinations. Travellers using the airport are expected to increase from a current yearly average of two million to 4.5 million over the next three years.

Lijiang was thrust into the national conscious in 1996 when it was struck by a magnitude 7.0 earthquake. The quake destroyed 185,000 homes and damaged 300,000 others.

Tourism in Lijiang has exploded since 1997 when the Old Town received UNESCO World Heritage status for its use of traditional Naxi architecture in the rebuilding process.

LiJiang has more tourists than Beijing, Shanghai, Xian? Surely not?

It's not. It's just blog spam masquerading as news....

So have they rebuilt the library at the local college they declared unsafe to occupy after the earthquake yet?

I believe they mean traditional tourists, not including migrant workers. That's why they noted hotel room bookings as it aligns with travel for leisure.

You're right, it does say domestic tourists (missed that), but I'm still surprised and skeptical.