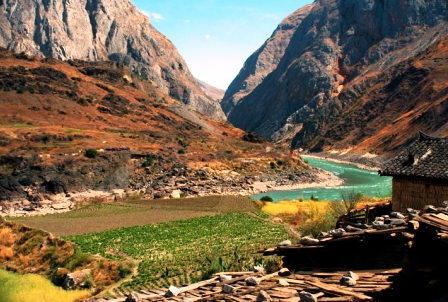 Site of a proposed dam near Baoshan, north of Lijiang

A nearly decade-long argument over the efficacy and environmental impact of a series of dams along the Jinsha River has recently spilled into the Chinese press.

The Jinsha River (金沙江) has portions within the Three Parallel Rivers of Yunnan Protected Areas, a UNESCO World Heritage Site.

The controversy highlights some major differences between groups that see hydro-power as a sustainable solution to China's ever-growing need for power and those that fear industrialization plans are often made without addressing environmental concerns.

At the center of the quarrel are two men, Yang Yong, head of the China Foundation for Desertification Control and Zhang Boting, deputy secretary general of the China Society for Hydropower Engineering. The two have been trading barbs since mid-May when Zhang published a series of 11 articles defending dam projects along the Jinsha River.

As evidence in support of the damming projects he cited similar initiatives in other countries such as the Tennessee Valley Authority in the United States. Zhang has also called Yang a "pseudo-scientist" who doesn't understand the situation.

The current plans for 24 dams along the Jinsha River call for consecutive hydroelectric sites roughly every 100 kilometers. When completed, those dams are projected to produce four times more energy than the Three Gorges Dam generates each year.

Conversely, Yang argues that the series of cascade-style dams either currently under construction or in planning stages, will make large swathes of the river stagnant. He is also concerned construction would seriously impede fish migration and downstream silt distribution.

Yang further countered that Zhang was comparing the circumstances in China to entirely different situations elsewhere. He accuses Zhang of misquoting data regarding foreign dam projects. Yang has been voicing his concerns regarding hydroelectric initiatives along the Jinsha River and their possible negative environmental impacts since 2004.

This is not the first time hydropower projects on the Jinsha River have been called into question. The Chinese Ministry of Environmental Protection suspended two dam projects in 2009 for failing to conduct proper environmental impact studies. A year earlier plans to dam Tiger Leaping Gorge were scrapped due to local protest and environmental concerns.

Wow. There were plans to ruin Tiger Leaping Gorge. That would be like building a golf course on Shilin. Oh wait, that happened.

China has a long history of building major public works for national public security - the Great Wall, the Grand Canals, and of course, the Three Gorges Dam - which was more of a flood control issue than a power issue.

That the Jinsha project can produce up to four times the Three Gorges Dam is rather astonishing and self condemning - it is inevitable unless China's solar and wind projects can actually cover the gap - which is doubtful.

Instead of trying to "block the dam" - a better approach is try to develop techniques to minimize the negative effects - such as sluices to maintain water flow, and other well known hydropower design and construction techniques. Although it won't resolve the environmental changes wrought by the dams, perhaps it can in a small part (perhaps token) resolve some issues.

This is not really news. There are already a handful of large dams in Yunnan along the Jinsha river, three to the east of Lijiang and one under construction north of Chuxiong. The license for an additional one under construction to the east of Lijiang but construction continues nonetheless. When I accidentally came across the site while hiking through the area, I was informed that it was an illegal project and that a handful of protesting locals had already been rounded up and threatened. Given that Deng Xiaoping's daughter is the head of the main state-owned hydropower company, it seems unlikely that anything can halt the eventual daming of all of NW Yunnan.