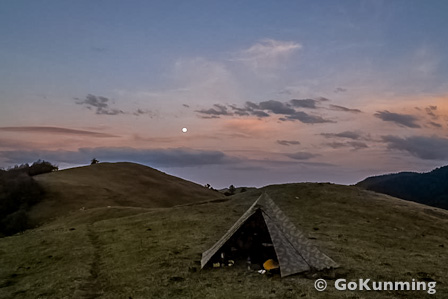 Editor's note: Adam Kritzer is a longtime Dali resident and founder of ClimbDali, a company offering guided outdoor trips and adventures in and around the Dali area.

Located 60 kilometers from the city of Lijiang, Laojun Mountain National Park (老君山国家公园) is a showcase for the biological and cultural diversity of the Three Parallel Rivers Areas. Laojunshan is home to 168 endangered plant and animal species including the Yunnan Golden Monkey (滇金丝猴). It also boasts 10 percent of the world's rhododendron species.

Despite being added to China's fledgling National Park system in 2011, there is very little information on Laojunshan in English.

The only practical option for most travelers wanting to visit Laojun Mountain is to hire a van from Lijiang or Dali to Qunlong Shanzhuang (群龙山庄), a small village at an elevation of 3,800 meters. The town has the only official entrance to the scenic area.

As a result of the travel expenses and time that this route entails, most visitors to Laojun Mountain opt instead to tour the sandstone rock formations at Liming. They are more accessible and offer a mix of both Karst and red sandstone geologic rock formations.

We were in the mood for hiking and decided it would be more rewarding to trek around Laojun Mountain instead. Our plan was to hike directly up and over the mountain range and determine the route down once we reached the 99 Dragon Pools (九十九龙潭). 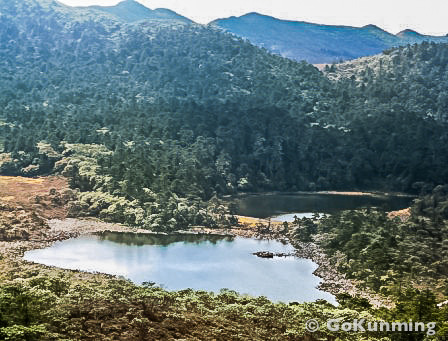 We set off from Dali by catching a bus to Jianchuan County (剑川县), and then hired a minivan in the direction of Yangceng (羊岑), north of Shaxi Old Town. From there, we hiked up to an Yi village in the foothills of the mountain and found a nice place to camp directly above the village's massive Torch Festival (火把节) fire pit.

The next morning, we walked north, following a well-cleared path up towards the arc-shaped ridge of the mountain. We stopped to ask for directions from a handful of Yi villagers who were at first reluctant to help us. They were nervous we might draw attention to the illegal logging they were doing nearby. With their eventual assistance we made it up to a mountain pass that was marked on an old map we had with us.

We continued along a logging trail up to the base of a high ridge that marks the boundary between Dali and Lijiang prefectures. Here the trail ended abruptly and we were forced to scramble through a rhododendron forest up to the ridge line. We paused to take in the expansive views surrounding the 4,100 meter pass and then headed downhill to make camp beside calm azure lakes. 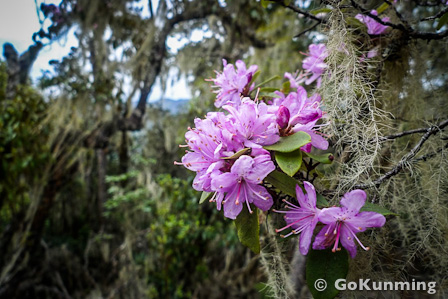 Despite having reached the main tourist area — complete with a network of wooden boardwalks — we encountered only one other camper. His friends had abandoned him in favor of more comfortable lodging in Qunlong Shanzhuang. We decided to camp with him for the night.

Bright sunshine woke us the next morning, and we began to make our way over two small passes that separated us from the main 4,250 meter peak of Laojun Mountain. We found a trail and followed it as it wound northwest across the mountain through beautiful old-growth forest.

The forest was filled with huge trees covered in hanging moss and bursting with color from the dozens of different species of rhododendrons that bloomed late this year because of the drought.

We passed a couple of Lisu hunting camps, as well as a few villagers who were foraging for wood-ear mushrooms and valuable chongcao (虫草), a staple of Traditional Chinese Medicine. All were surprised to see us but eagerly offered directions for finding the way down the mountain. 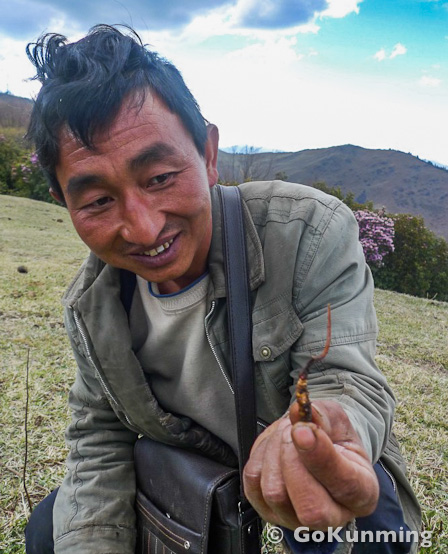 That night, we pitched our tent at the top of a steep pasture, which provided us with fantastic views of the snow-covered peaks of Yulong and Haba Snow Mountain in the distance. One of the herders that lived nearby informed us that the area had been home to a small colony of Yunnan Golden Monkeys but that they had fled when blasting began for the scenic area's access road.

We continued down the mountain the next morning, passing a dozen or so people heading in the opposite direction carrying hand-made muskets and other provisions. In the early afternoon, we arrived in Lanxiang Village (兰香村), which is known for its sulphur-infused hot springs. 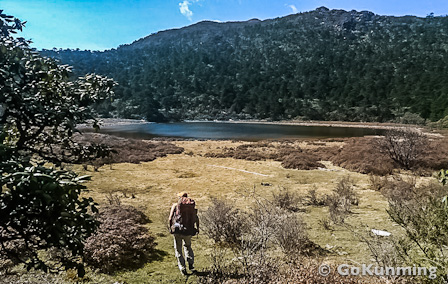 We caught a ride in a truck piled with garlic and driven by a Lisu farmer to the nearby town of Shitou (石头乡). We spent the night in a local guesthouse surrounded by clear streams, lush rice paddies and fields of yellowing buckwheat.

From there, it was only a half-hour minivan run to Shigu (石鼓镇). The town is quickly becoming a stopover point for tour groups due to its position at the first bend of the Yangtze River, known locally as the Jinsha River.

It appeared a ferry pier was under construction — possibly providing a new way in to Tiger Leaping Gorge for tourists and locals in the future. Transportation there was plentiful, with frequent minibuses to Lijiang and Dali, two and five hours away, respectively.

Getting there:
Bus tickets from Dali to Jianchuan cost 35 yuan per person and the minivan from Jianchuan to Yangceng costs 15 yuan. The return trip from Shitou to Shigu by minivan was 10 yuan, and Shigu to Dali cost 50 yuan.

Hiring a round trip minibus from Lijiang to 99 Dragon Pools costs around 400 yuan and can be booked through local travel agents. Travel time is between two and three hours.

For the less intrepid, the main access road to Laojun Mountain originates in Jiuhexiang (九河乡). There is an 80 yuan fee to enter the scenic area, and a small lodge near the ticket booth in Qunlong Shanzhuang.

For an alternative route around (but not up) the north side of Laojun Mountain through Liming Valley and up onto the Big Sheep Meadow, I've written this blog: