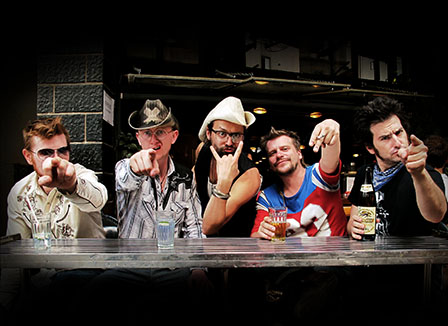 The Québec Redneck Bluegrass Project (QRBP) can rightly claim to be Kunming's only Western hillbilly band. The group is made up of four French Canadians, JP (guitar/vocals), Chuck (bass), Frank (upright bass), Nick (accordion), and Irish outsider Mark (slide guitar). Their songs are a garbled mess of French, English, Irish, and Chinese.

QRBP have released two albums, Sweet Mama Yeah! (2010) and 3000, Boulevard De Mess (2011) in both LP and download formats. They also have a number of videos on Youku, including one GoKunming featured in early 2011. The band will play a farewell show Friday night with War Whores before several members of QRBP depart for Canada's greener redneck pastures.

GoKunming recently caught up with the Rednecks at Salvador's and struggled for an hour to get a serious answer out of them. It didn't work.

GoKunming: Are you guys really rednecks?

Chuck: No way. But if you give us some farm equipment and chickens then we could be.

GK: Do you guys have any favorite farm equipment?

Chuck: Any machines made by John Deere or John Deere himself. Frank is currently banned from farms and must stay at least 50 meters from any live animals in the province of Québec for the next six years. So he loves Kunming.

GK: How long have you been playing together?

Chuck: Since 2007, back in the days when we were better looking, still had teeth and hadn't spent time in prison.

GK: Your music has been described as gypsy punk, how would you describe it?

Chuck: If you put your ear really close to a beer when you open it, that's what our music sounds like.

Mark: Some people call it Bluecrass. Others call it a holiday at the farm. Possibly we sound like the birth of a pig.

Chuck: We are basically a boy band. Eighty percent of our MySpace visitors are chicks. We asked Justin Bieber to join the band, but he refused.

GK: Tell us about the band's new line-up.

JP: Frank has joined us with his stand-up bass. He used to work in a zoo in Québec feeding penguins. He encountered a lot of racism there because of his red hair, so he moved here. Also, Mark is now playing slide guitar.

Chuck: We lost banjo-boy Dan. He has moved to Thailand to become a woman, but he kept his beard. Didier is now in Mexico boycotting drugs. 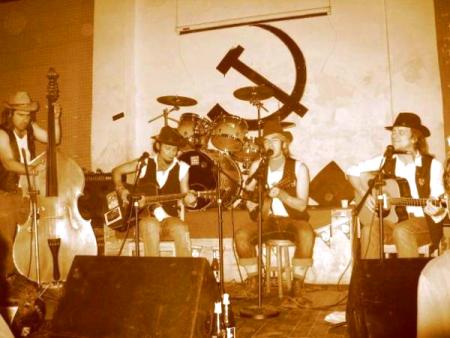 The Rednecks at Laowo Bar, circa 2007

GK: Where will you play during your summer tour?

Mark: We will be touring Québec in the summer and then we will do a year long world tour of Fiji.

GK: Are your tours sponsored?

Mark: For the tour of Québec our sponsor is women.com. They gave us one crate of beer.

Chuck: We are also currently considering an offer to go to North Korea to re-work their national anthem.

GK: Other than the national anthem, are you planning any new releases?

Chuck: The third one was recorded in Pyongyang, but someone won't release the files. The Mask might be helping us to record a live album. That album will hopefully feature Paris Hilton.

GK: Any plans for a Tribal Moons reunion before you go back to Canada?

Chuck: You will have to ask Mr John Nevada Lundemo. Anyway, we are all really just backwash from the one Tribal Moons cup.

GK: You guys have a large following in Canada. How did that happen?

JP: Every time we play to Canadian audiences, we have to autograph breasts. Here in Kunming, we don't really do that. In Canada, we like to play Hotel California, whereas here we don't really do that either. The last time we did an interview with Rolling Stone, they seemed to think we were probably doing better in Canada.

GK: Does the band have any groupies?

Chuck: Yes, we do. Most of our groupies are girls and human. 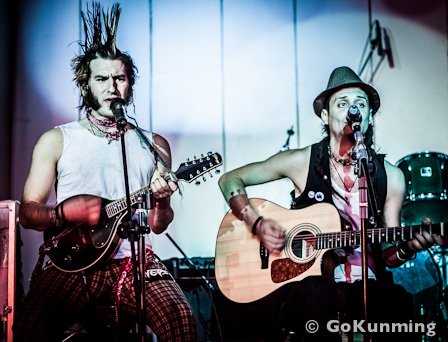 GK: Is it true that you guys know Celine Dion's husband?

Chuck: Yes, that's true. Celine's husband doesn't like the band's music very much, but he does like us as people. There was a rumor flying around that JP was dating Celine, but that's simply not true.

GK: What's the difference between playing shows in Canada versus playing in China?

Mark: The time difference, which is about 12 hours.

GK: Who are your musical influences?

Mark: And the Lord Jesus. If lovin' the Lord is wrong than we don't want to be right.

GK: How many instruments have you lost on the road?

Chuck: One violin and our bass player in Zhengzhou. If anyone has seen him, please get in touch with the Canadian embassy on Wenlin Jie. It's beside the toilet, upstairs.

GK: Are there any rituals you perform before a show?

Mark: We usually like to oil each other up backstage.

The Redneck's show with War Whores is Friday, June 1 at the Camel Bar. Doors open at 9:00pm and admission is 20 yuan.

Back of the net! What an interview!

Obviously Hugh, you didn't interview them before they had a drink.....
(I did warn you)...

I can't help but love these guys, and their wonderful sense of humour.

They all have a heart of gold, and enormous passion and energy for life.

I sure have many great memories of gigs, touring and just hanging out together.

Wishing them all the best on their tour, and hopefully some of the guys will come back to Kunming.

As you can tell, it's all about brothers, and cousins, and sisters and fathers — and animals.

"Backwash from the one Tribal Moons cup", indeed.
I figure meetin' 'em out on the road, like say on the "year long world tour of Fiji", might be my best bet in convincin' 'em to let me play a few licks on my banjitar. So far, this outfit's been a bit reluctant, but I can see and read that they've matured some.
Well, they're my boys. And God, gods, and most everyone, 'specially me, loves 'em — no matter what they do, or what they have or haven't been up to.
Nevada

great interview ofcourse..I come to pick you up with the shot bus late this night!!

you guys should be work as stand-up comedians as your second career....

I own a picture of chuck in childhood when he still had black skin, also a rare bootleg in wu ding, that day the city council banned them as gays (同志), it's all documented in the papers for the people who can read chinese..the same day george michael sued the band because of their plagiarism of careless whispers...please contact at
paparazzikm@gmail.com, all rights reserved

That Mark guy's so ugly, he could be a modern art masterpiece.