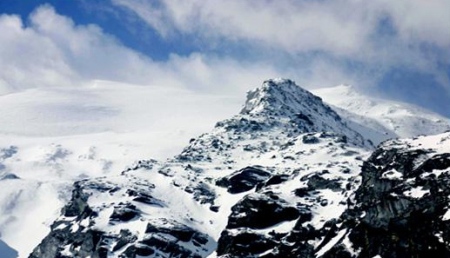 Haba Snow Mountain (哈巴雪山) is the massif that forms Tiger Leaping Gorge's (虎跳峡) northwestern wall. It is on the flank of this mountain that thousands of tourists a year walk through the gorge on the high path from Qiaotou (桥头) to Walnut Grove.

From the path the upper reaches of Haba are obscured and it is not until trekkers leave the gorge for Zhongdian (中甸) that the vertiginous final slopes of Haba's east face are visible.

As one travels out of the gorge toward Haba village (哈巴村), the mountain's broad ridge comes into view. Thick forest covers the lower slopes before giving way to grey granite slabs, glaciers and finally the summit, 5396 meters above sea level.

This is the route by which the mountain was first summitted in 1995 and is a straightforward hike with no technical climbing involved. We took walking sticks, cold weather clothing and crampons for the glacier.

GoKunming planned a five day trip to summit Haba, which included round-trip travel to the mountain from Kunming. Weather reports forecasted strong gales the day we planned to hike and our itinerary left us little room for adjustment if things did not go smoothly.

We took the overnight train from Kunming to Lijiang and went straight to the bus station. The morning bus from Lijiang to Zhongdian was booked up, so instead we boarded the one to Baisha. This change of plans took us ten kilometers north of Lijiang and afforded us the opportunity to hike to the 4200 meter south summit of Yulong Snow Mountain.

Eight blister-filled hours later we wearily caught a bus from the trailhead back to Baisha. It was a perfect acclimatization hike before our ascent attempt on Haba three days later. 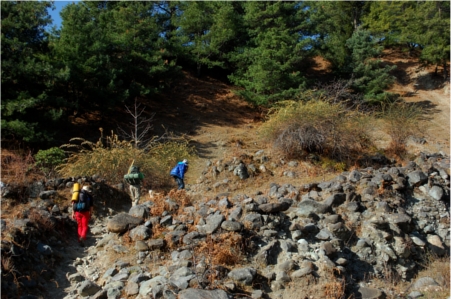 Hiking below the tree line

We returned to Lijiang and boarded the bus to Haba village. The ride takes passengers through Tiger Leaping Gorge via its main road. Tourists must pay the 50 yaun entry fee even when passing through by bus.

When we arrived outside the Snow Mountain guesthouse at 2:30pm the next day, we were told there was no way we were going up the mountain that afternoon. Not only would the trek take seven hours and leave us hiking in the dark, but there were also no guides around to show us the way.

The route from the village to base camp gains 1500 meters of elevation and follows a network of trails through forest, snow and rocks. In bad conditions it could be very difficult to follow. To make things easier, we employed a guide who charged 150 yuan a day.

The hike from guesthouse to base camp took only four hours, and we almost forgot the next day's forecasted gales. 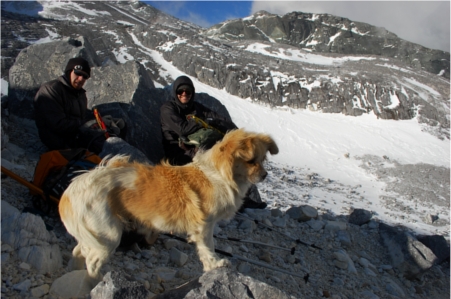 The guide and his dog left us to make their way back to the village, leaving us alone on the mountain. Four derelict stone buildings, one without a roof, comprised the unkempt base camp. The area was littered with garbage and the buildings were falling into disrepair. We set up camp outside and then wandered around the area, enjoying the views and solitude.

Later, we sat down to brew some tea and relax in the afternoon sun, feeling optimistic about our chances the following day. Just three days earlier we had arrived at the top of the south summit of Yulong Snow Mountain, tired and hypoxic despite carrying only light day packs.

We had just covered the same elevation gain with our guide, this time carrying much heavier gear. The acclimatization had paid off better than any of us had expected. After dark the wind began to gust and the temperature dropped quickly. 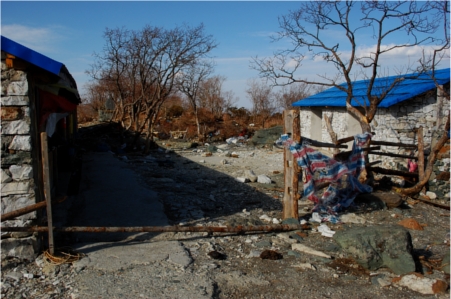 That night we slept in doorways to hide from the steadily increasing wind, guiltily taking advantage of the shelters we had spent the afternoon ridiculing. In the predawn darkness the next morning we made porridge, ate and set off, our headlamps providing the only light.

From camp the path wends its way over small moraines to the base of a huge granite slab. A well-worn path can be seen cutting up the slope to the left, and we followed it until stepping out on the rock to climb higher. The rock gave way to moraine and a path reappeared to follow a loose rocky ridgeline.

The wind had been a cause for concern since we left camp and now it began to blow with increasing force. We were still relatively sheltered by rock outcroppings and crags and the wind was whipping around and making forward progress extremely difficult. The higher we climbed the more violent and prolonged the gusts became. It made every step frighteningly insecure. 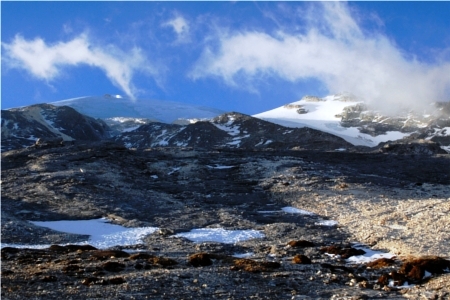 Up where the wind gusts live

We dropped to our hands and knees to brace against the wind. It was strong enough that we could lean forward at 50 degree angles with no support and not fall. Crawling was the only way to not be bodily pushed backwards. We knew the gales would be much stronger higher up on the flat, unprotected glacier and reluctantly turned back.

It was a long walk down from our high point of 4800 meters, and it was with weary legs that we trudged back to the front porch of our guesthouse. Our lovely hostess greeted us with a beaming smile and three huge bowls of delicious noodles. She said she had been worried about us and thought the wind was far too strong on the mountain for hiking. She pointed out that while we were gone the berries had all been blown off her fruit tree.

Getting there:
Lijiang can be reached by plane, train or bus. Buses from Lijiang to Qiaotou or Haba village (37 yuan) leave from the city's main bus station (丽江汽车客运站). Remember to keep the 50 yuan entry ticket to Tiger Leaping Gorge. This will save having to pay an additional 50 yuan when returning.

Guest houses and home stays in Haba village are easy to find. Our room was 20 yuan per bed.

editor's note: Anyone planning to climb a mountain in Yunnan or elsewhere should be aware of altitude sickness and know the warning signs. Travelers attempting Haba who have not previously acclimated should spend an extra day hiking around base camp.

GoKunming also recommends carefully studying High Altitude Pulmonary Edema (HAPE) and High Altitude Cerebral Edema (HACE). The onset of these conditions can be insidious, and early symptoms of HAPE are often mistaken for a simple cough brought on by cold, dry air.

Weather reports for mountains should also be monitored carefully. Any summit attempts should be postponed or cancelled when forecasts anticipate wind speeds of 50 kilometers per hour or more.

Note that a few weeks after GoKunming's trip, the price of entrance to Tiger Leaping Gorge rose to 65 yuan.

Another option in this region is to bicycle from Zhongdian to Lijiang (or vice-versa) via the road around the East side of Haba Mountain. This road is paved and in excellent condition, yet receives almost no traffic, making it an excellent bike ride, with views of Haba and dozens of snow-capped peaks in the mountain range that stretch northward from it.

In Haba Village, Mr. Bao (包大哥) has a guesthouse and a trekking service. He's very knowledgeable about the local geography, history, and culture, and can lead trekkers not just to the summit, but also to pristine alpine lakes, waterfalls, meadows, and forests. His phone number is 0887-8866536 and his QQ is 1159634650

Yet another 15rmb increase. Though Tiger Leaping is one of the fees I think is well worth it.

The scenery on the East Ring that Geogramatt mentioned is wonderful. You'll need raingear cause your riding with the clouds at one point. Bit spartan on services, so bring some energy bars and extra bottle of water. If your in good shape, you can make the halfway point of 白水台 in a day by bike.

If by bike, coming in from the East side of TLG will probably cost you nothing. I haven't ever been checked on that end despite my multiple entries and exits.

That is if you are lucky and the guard station is off eating lunch or break. Or you can show up at night. Last time I went through on the east entrance, the guards chased me down in a minivan and demanded I pay the 50rmb (now 65) entrance ticket, even though I was just planning on passing through.

No guards care if you are leaving TGL at either entrance, but if you weren't checked entering, then that's good luck.

Ah okay :) I must've been lucky or the guards must've remembered me after exiting first.

I understand that you haven't made it to the top? I did this last year: getting to 5396m was a pretty sweet experience, but it would probably be unwise to do this without a guide. Especially if you've never been hypoxic on a mountain before (I hadn't).

Photos and story on www.crazyguyonabike.com/[...]

Nice post about a great local mountain climb in Yunnan! A few words of caution though. I have climbed Haba and while it is indeed techically non-technical (pardon the pun), the last section in entirely on the glacier and as noted indeed reaquires somewhat skilled crampon use/walking. Over tha past several years a number of people have indeed died because they were inexperienced walking on ice or possibly didn't know how to self arrest after slipping. As long as you stay on route via a path of bamboo wands, crevasses are not a concern. But having had some expereince walking with crampons and the ability to self arrest is also advised, and many seem to have attempted the climb without taking this into consideration.

I don't seek to scare anyone off from Haba. It's a great climb, but having some prior experience or climbing with someone who does is a really good idea. Having worked as a climbing instructor, safety and experience is always a high priority in my mind. Some of the local guides also don't carry and ice axe, but this is also something that I would recommend.

Also, as in many alpine environments, conditions can in a matter of minutes go from clear blue skies to not being able to see more than a few meters in front of oneself. One should also be wary of cornices, especially as you get to the top of the big, steep snow field and start traversing to the right along the ridgeline and toward the summit. Stay well to the side that you climbed up from and don't get to close to the far side of the ridge, as I don't think there's actually anything underneath much of that snow.