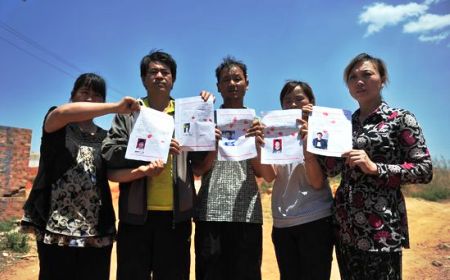 Family members of the missing boys

Over the past year and a half Jinning county residents have been shaken as several local adolescents and adults have inexplicably vanished.

Global Times is reporting that six people between the ages of 12 and 22 have disappeared since January 2011, with the most recent case occurring on April 25th. The missing persons are all young men from the town of Jincheng (晋城), which is 30 kilometers south of Kunming.

Police could not find any reason that the missing boys and men would have run away from home and could not uncover any evidence of foul play. However, in April a man who had disappeared from Jincheng returned to his parent's home after escaping forced labor at a brick factory.

Lei Yusheng was dragged into a car on April 7 by two men armed with a sword. He was taken to a factory and forced to make bricks with other captives for ten hours a day until he escaped on April 25. Media reports have yet to mention if Lei has identified his captors or the location of their brickyard.

Lei's story has led townspeople and police in Jincheng to believe the other victims could have been forced into similar circumstances. The Kunming Public Security Bureau dispatched officers to Jinning county on May 3 to assist in the investigation.

Illegal brick factories and their links to forced labor were also in the news in 2010, when 24 people were freed from a 'black' brickyard in Shilin county, Yunnan.

In an unrelated kidnapping case also from Jinning county, a boy was held for ransom for ten days. Five men where demanding two million yuan (US$318,000) for the boy's safe release before they were arrested by local police on May 4. The boy has since been reunited with his family.

Truly sad this goes on.

Thanks Pat for bringing the kidnappings and slave labor to our attention.

Sometimes we forget the tragedies that are happening at our own doorstep.

I had a student whose brother was kidnapped. He was only 9yrs old. The kidnappers asked for a ransom, and my students family informed the police. Luckily the boy was returned without the ransom payed, unharmed.

This is now front page news in Chongqing. The number of people who have disappeared has risen to 17 and there are fears a serial killer may be involved.
www.danwei.com/[...]

Cops got their man, seems they were a bit slow considering he had a track record for killing

WTF is all I can say. WTF WTF WTF. I will not be buying ostrich meat from any countryside farmers for like...ever.