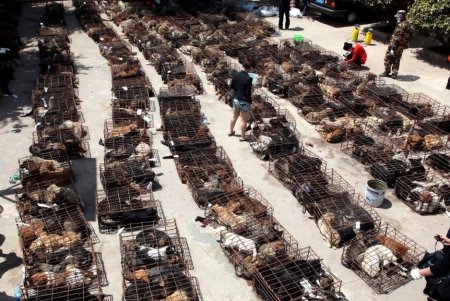 The saga of a group of dogs supposedly slated for destruction and their subsequent removal from harm's way has gone viral in Yunnan.

China Daily is reporting that a truck carrying 500 dogs crammed into makeshift cages was stopped near Kunming on April 19. Several pedestrians who were concerned the dogs were being shipped to restaurants or were going to be sold illegally called police.

The shipment of dogs was on its way from Sichuan to Guangxi Zhuang Autonomous Region. Although police reportedly found the truck and its contents to be entirely legal, the dogs were bought by an anonymous businessman for 60,000 yuan (US$9,500). They were unloaded from the truck and relocated to a parking lot near Jinchuan Lu (金川路) in Kunming.

Rumors of the dogs and their plight quickly spread over the micro-blogging site Weibo. More than 200 volunteers who had been following the story on Weibo arrived at the temporary shelter Saturday night to provide whatever assistance they could. 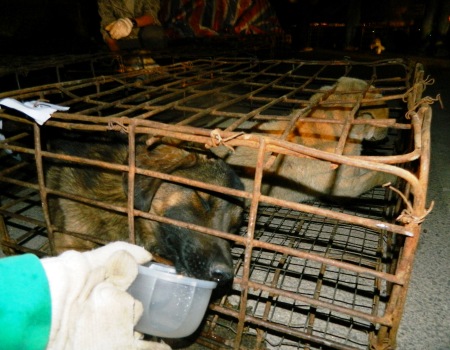 The dogs were moved on Sunday afternoon to the Kunming Agricultural Institute (昆明农业职业学院) in the village of Xiaoshao (小哨), according to Weibo reports. Many volunteers worked for hours to provide the dogs with food and water, dismantle the smallest cages and free the dogs inside.

People worked through the night and covered the cages with tarpaulins when weather threatened rain. Tents have now been erected over the cages and the dogs have been separated and moved to larger and more comfortable individual kennels.

Volunteer Chelsea Jones told GoKunming many of the dogs were sick, starving and dehydrated. Some, Jones said, were suffering from broken legs and puncture wounds caused by their cramped cages. Other dogs reportedly have distemper and several dozen dogs have died.

An organizer at the shelter, speaking to China Daily, said healthy dogs would be adopted by new owners. No reports have disclosed plans for the sick or wounded animals, although volunteers from the Agricultural Institute were on hand to provide care for those animals in the worst shape.

These people should suffer just as these dogs have. Starve them, make them dehydrated, break their legs and put them in a tiny rusty metal cage in the hot sun and see how they feel.

I'm glad people did the right thing and reported it.

Welcome to China. How to change this, on a large-scale? Most of this is completely acceptable by most people's standards. (This coming from a person who lives in the relatively-civilized Shanghai.)

Dogs are not people. Yes, they should be treated humanely, as should cows, chickens, and the more-intelligent pigs, regardless of whether they are to be someone's pet, a working farm animal, or to end up on my plate.

so glad to know people started showing concern towards these poor dogs...for centuries dogs in china have been badly treated and its time to change it and do the right thing!

Time to order a new lot of dogs for some one in Guangxi Zhuang Autonomous Region...
I also agree animals should be treated well, but this is just a very small step on that road.

I'm from the UK London. Can anyone tell me how I can make a donation to these kind people?, as I feel the need to help the dogs in some way

@ Mandeep: Mr Ouyang has been gracious and diligent as a community organizer helping these dogs. He left a message above. You can contact him through GoKunming's messaging function and he can tell you how to make a donation.

my guess is that the sichuan dog farm is making a killing.

Thanks for your letter.I`m an organizer here Ouyang Jin`gang,Are you in KunMing now？If you are,I want to meet you,to tell you more thing.
My phone number is 18213980036

"More than 200 volunteers who had been following the story on Weibo arrived" —- what a magnificent thing!

Man's best friend is on the rise in China, and these people are part of the proof. The guy who forked out the money is pretty noble also.

Does anyone know the laws on all this?

The previous post has been deleted at the Moderator's discretion.