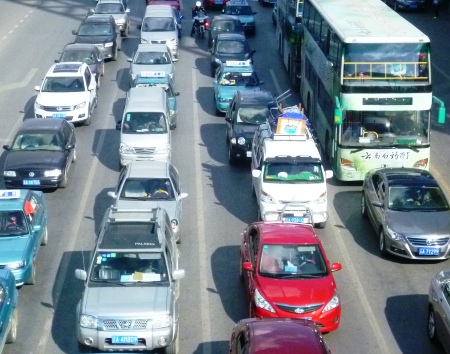 The new municipal government has set its sights on what has become a perennial problem in Kunming: traffic. The city is proposing stricter enforcement of existing laws plus measures such as more public parking spaces and the introduction of a congestion fee, according to a Yunnan Net report.

At a January 9 meeting of provincial and municipal officials, including new Kunming Party Secretary Zhang Tianxin (张田欣), it was announced that the city now has more than 1.5 million motorized vehicles on its roads, an increase of 200,000 vehicles since December 2010.

Addressing Kunming's increasingly congested streets has been an uphill battle for the city government during the rapid growth in private car ownership over the last decade. During this time, more and more drivers are driving and parking on sidewalks, and one driver has even taken to driving on pedestrian bridges.

A variety of measures have been taken, most of them only offering temporary relief, such as converting major traffic arteries into one-way streets, building an overpass at Xiao Ximen, adding an elevated road to the second ring road and construction of a third ring road.

Previous attempts to make Kunming traffic more civilized have also been met with resistance, most notably the two recent attempts to eliminate non-emergency use of car horns downtown.

The city is currently proposing charging a congestion fee for downtown drivers for the first time, as well as revisiting the idea of building parking garages, which in early 2009 seemed to be a priority but subsequently saw little follow-through. The only information made public about the proposed congestion fee and increase in public parking is that the goal of these actions will be to reduce the number of cars on the road downtown.

Despite the successes and failures of previous measures adopted by the Kunming government, it is too early to judge the resoluteness of the city government under party chief Zhang, who recently replaced Qiu He (仇和) a get-things-done leader who oversaw many of the aforementioned improvements to the city's traffic infrastructure.

In general, whenever the city government experiences a leadership change, major traffic infrastructure projects and other initiatives follow. In what may be a sign of a tougher attitude toward the increasing electric bike traffic, police at checkpoints throughout the city were busy today conducting random registration checks on electric bike drivers. 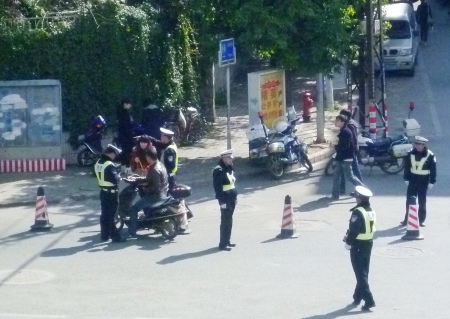 If the city's stated goal to increase enforcement of traffic laws is sincere, it would seem that one of the biggest challenges it faces is in coordinating the efforts of police, traffic police and chengguan (城管, city management officers) in an integrated and efficient manner. It is not uncommon for these different departments to work at cross purposes or leave enforcement work to the other two. Eliminating the inefficiencies in the relationship between these three arms of the city government would be likely to improve enforcement and in turn encourage Kunming drivers to obey traffic laws.

Kunming's number one traffic problem begins with enforcement. Laws are merely paper tigers - no substance with an effective, consistent, and sustainable enforcement as opposed to the "flavor of the day" approach.

Historically, China resolved various social ills and dilemnas with severe and strict punishments, as unfortunately negative reinforcement is far more effective in curbing aberrant behavior quickly than positive reinforcements (unless you slap the bad child and give the good child the bad child's cookies - or fine the bad drivers and give the good drivers discounts on vehicle registration, etc).

AND while we're on the subject - taxis that reject fares or change shifts during rush hour - HUMONGOUS LUDICROUSLY LARGE BIG OL HEFTY FINES. Not to mention all the revenues they can get for their spastic driving habits.

Since the city can't really raise taxes - BIG OL HEFTY FINES is a fantastic way to increase revenues to the city coffers. That's how American cities have operated for decades - police don't enforce laws and protect and serve the public - they use those guns to ensure we law abiding people don't squalk too much when they give us traffic tickets for any of a megagazillion to the infinity power things we can do wrong - including the post 9/11 "looking suspicious" law.

My soapbox just collapsed under the crushing weight of my excessive whining.

Lack of enforcement of the laws just serve to reinforce people's beliefs that what they are doing is OK. It's made worse by the fact that police and military are exempt from the traffic act and others simply follow their bad example. Last year we actually witnessed a hit and run accident, where a police car sideswiped a bus then promptly left the scene.

At the end of November I made my first ever visit to Hong Kong. What a refreshing change! Drivers followed the rules, as did pedestrians. The only people walking on the don't walk signs were from mainland China. At bus stops, people formed orderly queues as they arrived instead of everyone trying to be first. With strict adherence to the rules the traffic moved so much better!

I also noticed that people in Hong Kong don't use their horns much, as opposed to Kunming where somebody will be honking at 5:00 a.m. when there is only one other vehicle on the road!

Che ching!!! Ring in those fines with the ole cash register.