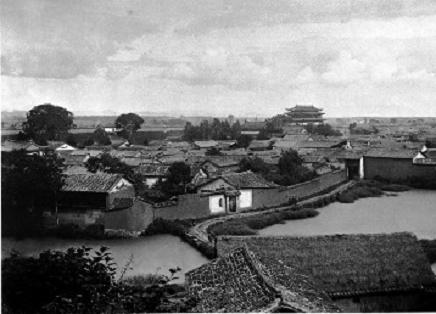 Editor's note: Unlike other Chinese cities such as Beijing ('Northern Capital'), Shanghai ('On the Sea'), Chengdu ('Complete Metropolis') and the utterly misleading Changchun ('Long Spring'), the origin and meaning of Kunming's name is much less clear. GoKunming reader and longtime Sinophile Peter Micic has cracked open the history books in search of leads for why we call Kunming by its current name.

Standing at a bus stop along Tuodong Lu and reading the long list of destinations on the billboard reminded me that the presence of the past is always felt in China.

Names that echo the glories of past dynasties, names that would perhaps conjure little in the minds of most commuters, unless of course you were a cultural historian—and then a mere name on a bus timetable or the long list of names displayed on large LED screens at railway stations would be evocative enough to catapult you back to a past waiting to be discovered or reclaimed. 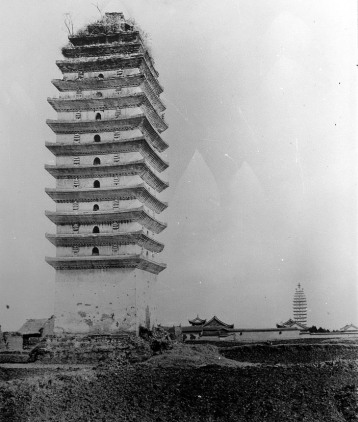 Kunming's Eastern and Western Pagodas in 1901

The East and West Pagodas located in the south of the city are a legacy of Tuodong (拓东) founded in 765 CE during the Kingdom of Nanzhao (737-902 CE). The East Pagoda was destroyed by an earthquake in 1833 and rebuilt a stone's throw away from its original location in 1877. 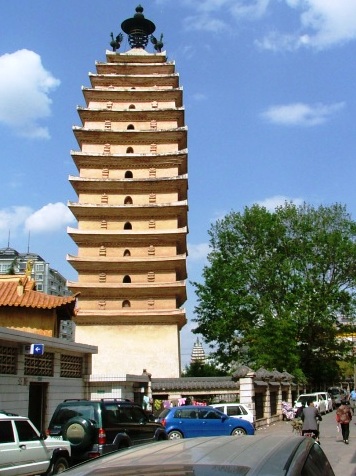 Tuodong City became part of the Kingdom of Dali (937-1253 CE) until the Mongol rulers took control of the region in 1254 and founded Kunming County (昆明州). The county became the provincial capital of Yunnan. The Mongols renamed the city 'Kunming' in 1276.

The question of how the name Kunming was chosen by the Mongols is one of those chestnuts that invites endless speculation. Some Chinese scholars have suggested  that the new rulers of the empire 'confused' or 'muddled' the County of Kun (昆州) during the Tang dynasty with a nomadic herding tribe called Kunming (昆明族).

Marco Polo apparently travelled through the major cities of Yunnan, including modern-day Kunming which he called Yachi, the capital of the Kara-jang Kingdom, on his way out of China via Burma. The Venetian traveler wrote that the Yachi—written in the Yuan Dynasty History as 鸭赤 and 押赤—was a bustling commercial and cultural center which 'traded in the finest horses, and spoke a peculiar language that was difficult to learn.'

The nomadic tribe Kunming, from which the city today is believed to have derived its name, was the largest group of nomadic people scattered across eastern and western Yunnan from the second century BCE to the eighth century.

The Jin dynasty scholar Chang Qu (常璩), writes in his Records of Land South of Mount Hua (华阳国志) that the Kunming tribes inhabited areas not only across eastern and western Yunnan, but regions of Ba and Shu in present-day Sichuan.

The name Kunming entered the official dynastic histories during the Han dynasty recorded by one of China's most celebrated ministers and historians, Sima Qian, in his Collection of Biographies of the Ethnic Groups in Southwest China.

Despite the wealth of textual sources dating back to at least the second century BCE, and the broken pots of antiquity unearthed in major archaeological digs in Kunming in the mid to late 1950s, the derivation of the city's name remains contested.

My understanding - and I do read about these things but rarely with such a specific goal as attempting to establish etymology (probably a lost cause a lot of the time!) - is that it was renamed 'Kunming' after the earlier identification of the Yunnese peoples of somewhere closer to Dali at the Kunming tribe.

This gets you to real sources vs. secondary ones.

This is interesting stuff. Thanks.

I have a free Kindle book, "Across China on foot" by Edwin Dingle, 1911. He spends a lot of time walking around Yunnan. He writes of being in the Yunnan Province capital of "Yun-Nan Fu" (云南府 ??). Not once does he use "Kunming".
Prior to the Mongols capturing what they named Kunming, it was known as Tuodong.

Note: You can download Kindle for PC or Mac, it is free. There are thousands of free books and several on China. It is fascinating to read 100 year old comments on China, Chinese, and China culture which are unchanged from feudal times until today.

Geezer, those are from Project Gutenberg, rather than Kindle themselves. See www.gutenberg.org/ - you can volunteer to help!

Walter, got mine from Kindle. Project Gutenberg has a version with illustrations.

Actually, Project Gutenberg has more than 200 FREE downloads on China. Many of these are in Chinese, 汉字。

Any .mobi ebook will work on a Kindle or Kindle for PC or Mac.

Or you can have any other format handsomely converted into a .mobi by the free software Calibre. It will also send it through USB or per e-mail to your kindle. Yeah.

bluppfisk is right. Calibre is really good and easy to use. I have found making your own original ebooks for the kindle fairly easy. I do it this way: Word -> RTF -> MOBI. PDF docs can be converted as well but it depends on how the PDF doc was created. Color photos can look sad on the kindle so they are best converted to BW first.

After reading this article I decided to do some research of my own. I have unearthed some very interesting finds. It appears, according to some Jin dynasty scrolls I found near Cuihu, that The 昆 derives from an ancient tribal ritual site known as 昆都 and the 明 comes from the bright lights they used. Historical fact. Probably write a book soon

Correct Jarhead, thanks for spotting that. The error has been corrected.

In the 1870s, the city was Yun Nan Fu but it was in the county of Kunming. So Emil Rocher, La province chinoise de Yunnan (Paris, 1880). Caravan Press (connected with Mandarin Bookstore) will publish an English translation soon, by the way.

While not Kunming, I able to come up with a completely new theory/perspective on the name "Yunnan". Mainly derived from an Islamic etymology/influence (and with etymological links to Sanskrit). And we are talking about Yuan dynasty, and Mongol/Central Asian influence. While not being able to link Kunming (at least yet) inside this hypothesis, Yunnan will clearly fit in.

Just curious if someone else out there also has a theory/perspective on the etymology of "Yunnan"?

And while mentioning it: why would the powerful new Yuan rulers (Central Asian and Mongolian aristocrats that arrived to Yunnan) had picked up a silly name for their provicial capital according to a forgotten tribe. That theory sounds like a joke. Maybe theres an Islamic connection here too. And, at same time the han character connection with sunny city. Just as Yunnan also is south of the clouds.

While 拓 is today used as character, the original character (most likely) was 陀, and is in relation to a buddhist/i dianized geography. It comes from 犍陀罗 and is the chinese name for Gandhara. Kunming was Eastern Gandhara, Dali was Western Gandhara. This is part of the sanskritization of earlier Asia, even the Dali ruler took the title of maharaja. Gandhara is Sanskrit and means fragrant and hence Dali applied 妙香国 as its Buddhist name. Kunming was Easter Gandhara 陀东. When Yuan dynasty arrived it wiped this out. The point is anyway that the "real" characters for Tuodong are 陀东.

Your theory sounds good however my observations differ - in the 9th century Nanzhao-era / Tang Dynasty text about Yunnan I am translating 柘 is used instead of 拓 or 陀 for Tuodong.

The degree of character-shifting observed over time would suggest that the 'real' origin of the sound Tuodong is an earlier, endemic, non-Chinese language. Given the time and historical linguistic makeup of Yunnan to which modern groups and other evidence attest, this was probably related either to a language spoken by the Yelang Kingdom (eg. Miao/Hmongic) or an Yi language.

As I have already found very directly attested Yi words transliterated to Chinese in the same book in the context of Nanzhao's army, weapons and customs, I would suggest this may be the origin.

Unfortunately Yi is a very fragmented language family so it is difficult to infer meaning to ancient phonemes.

Note that 柘 can refer specifically to the Chinese mulberry (on which silkworms are grown) or may refer more generally to thistle or thorny shrubs. As the document is written for the Emperor/imperial bureaucracy, the choice of character could be an purposeful implication, ie. 'its a thorny horrid place', or 'we will gain mulberry fields and silk through conquering their territory'.

Note also that the Chinese author of the text specifically accuses Nanzhao of stealing silkmaking technology from the Chinese through capturing large numbers of women and children in a recent invasion of Sichuan, and asserts that all of Nanzhao is now capable of silk production.

Right, Voltaire. Indeed, it could as well have been 柘。This depends on how Gandhara was written, or referred to in those days.