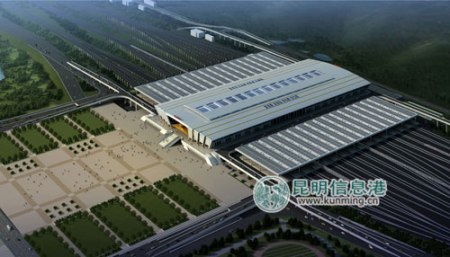 How fast is Kunming changing? So fast that the airport and light rail network that are both scheduled to open next year already feel like old news.

In 2016, Kunming will add a second major train station that, once operational, will be the largest passenger train station in southwest China, according to local media reports.

the awkwardly named Kunming South New Station (昆明南新站), which was originally announced two years ago with no timetable for completion, will also be the focus of China's planned high-speed rail links with Southeast Asia. Construction began on the station in June of this year.

Kunming Station (昆明站), Kunming's current train station, is not slated for demolition once launches. Rather, it will primarily serve rail traffic to the west of Kunming and also continue to serve the Chengdu-Kunming and Nanning-Kunming lines.

The new station's terminal is expected to have an area of 100,000 square meters, roughly three times the area of Kunming Station. It will also be connected to lines 1 and 4 of the city's planned urban light rail network as well as the city bus system.

Kunming South New Station will have 30 rail lines and 16 passenger platforms and is expected to have a capacity of 128,000 passengers daily with a maximum passenger volume of 12,000 people per hour. 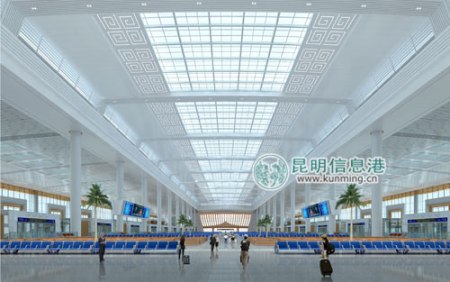 Once completed, Kunming South New Station has the potential to become one of Asia's most important train stations. Not only will it be a terminus of several important domestic high-speed rail lines, including a less-than-10-hour high-speed line to Shanghai, it is also being groomed to become China's main rail link to Southeast Asia.

Although Southeast Asia is coming increasingly under China's sway, Beijing is finding it difficult to force progress on the long-planned Kunming-Singapore Railway, which would link Kunming, Singapore and most major cities in between via three trunk lines running through Vietnam, Cambodia, Laos, Thailand, Myanmar and Malaysia.

The Kunming-Singapore line has had several obstacles to progress pop up in recent years, including a small-scale border war between Thailand and Cambodia and a recent announcement by Thai Prime Minister Yingluck Shinawatra that Thailand would not build one of its planned high-speed rail lines all the way to Nong Khai province in Laos.

Thailand Transport Ministry Permanent Secretary Supoj Sablorm recently told reporters that Shinawatra's administration has no sense of urgency with regard to the high-speed rail network, saying that links to Laos and Malaysia would "be revisited at a later stage". Supoj said that Bangkok's recent about-face was a result of postponement beyond 2014 of completion of the China-built section of the line in Laos that would link Yunnan with Thailand.

Should Beijing's Kunming-Singapore Railway dream one day be realized, it would in all likelihood become a game-changer for China's relations with continental Southeast Asia, where it already wields significantly more economic and political influence than it did just five or 10 years ago.

Not only would passengers be able to travel between Kunming and equatorial Singapore in a mere 10 hours, but domestic and international tourism and commerce would likely boom. Given the steadily growing trade relationship between Yunnan and Southeast Asia, completion of the network would also make Kunming one of the country's most important customs ports.

The location of this station will drive any average Kunming citizen crazy. It takes longer to get to the station than to the next province by fast train. People chose to travel by train because train stations are located at a closer location than airports. This won't apply in Kunming. That's really poor planning, regardless of those who say they think ahead of time and have located the station right there!

i dont think it s bad planning,there are so many people in china that every new hub is welcome. think about spring festival where everything is congested. guilin kunming also can help tourism. by subway in 45 minutes passengers can get to nan pin jie, not bad.

Maybe when the subway is finished. However, if you want to transfer to a slower train at Kunming main railway station, there is still a long walk from the subway.