By Matthew Hartzell in Travel on November 23, 2011 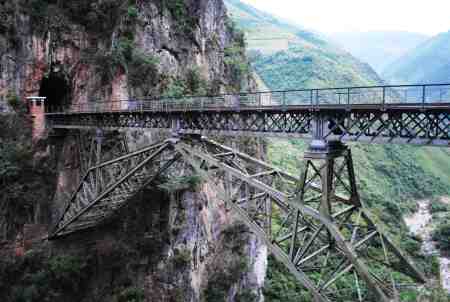 Closeup of the Renziqiao Bridge (JA)

Editor's note: The following article was written by GoKunming reader Matthew Hartzell (MH) who took some of the photos. Several photos were also taken by James Affleck (JA).

Last year Yunnan celebrated the centennial of the French-built Yunnan-Vietnam Railway, but with a new high-speed rail line connecting Kunming with Vietnam already under construction, this historic narrow gauge railway's days may be numbered.

Today the route can no longer be experienced from aboard the train – passenger service was suspended in 2003 – but it is still possible to see the occasional freight train rolling along these historic tracks.

Most of the line's 466 kilometers (290 miles) within Yunnan snake through river valleys and canyons away from modern transportation corridors. As things stand today, it's only possible to scout out the tracks in certain places where parallel roads exist. One of the most rewarding such sections begins at the Vietnamese border in Hekou (河口), following the Nanxi River (南溪河) north for 112km into Pingbian County (屏边县), ending at the Renziqiao Bridge(人字桥), which is shaped like ren (人), the Chinese character for person. We recently explored this area on our bicycles.

This route makes for an excellent bike ride, best tackled in two days, as there is an elevation gain of 1,000 meters, and the last section is quite steep and slow going on cobblestone roads. The downhill return to Hekou can be accomplished in one day.

The route runs parallel to the railway the entire way, offering chances to see the occasional freight train, and to marvel at the engineering that brought this railway through such forbidding terrain a century ago at great expense to French taxpayers. Significant sections of track are perched high up on the valley wall; tunnels and bridges are par for the course.

A Miao girl on the train tracks (MH)

The route also runs through colorful geographical and cultural terrain. The tropical climate and low altitude suit the Nanxi River Valley to banana, pineapple, and papaya plantations. Most of the valley's locals belong to the Yao and Miao ethnic groups, and many of the women and children still wear their colorful traditional clothing.

Most are farmers who live alongside the road in wooden huts and raise horses, which they use to carry bananas down from the steep slopes. 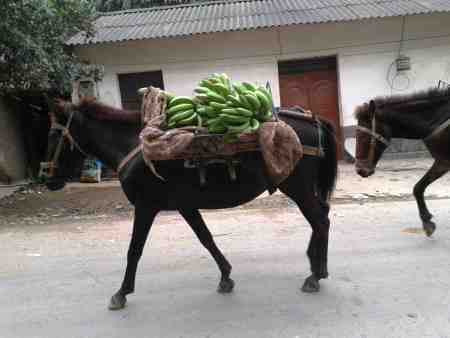 Horses carrying bananas down from the hills (MH)

We passed by numerous work teams washing and weighing bananas, and packing them into trucks bound for markets across China. 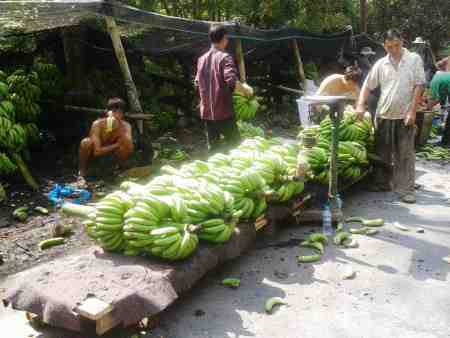 Starting in Hekou, we followed the river north and turn right at Binglang Road (槟榔路), also known as Highway 209. Heading out of Hekou, we climbed 200 meters uphill for 5km, before dropping back down to the Nanxi River. Once across the bridge, we turned left and started following the river.

The next 68km were relatively easy riding, with the road and the railroad following the river on opposite sides. There were many minor ups and downs, but no major climbs. At the 18km mark on the right side we stopped at a Yao restaurant in a wooden house by a waterfall where we had a tasty lunch.

At the 23km mark there was a junction in the road and a border patrol station where the police checked our passports. We turned left on Highway 235 and continued along the river.

At the 45km mark, the highway and railroad switch sides. Nice views of the diagonal railroad bridge are available from the highway bridge. 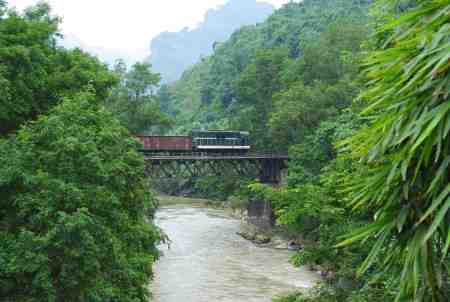 At the 70km mark, a rickety suspension bridge crossed the river to a train station and switching yard called Lahadi (腊哈地). 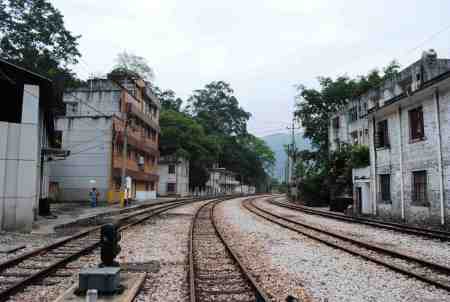 Lahadi is an interesting place to explore, with old buildings, railroad cars and engines, and a railroad turntable. We rode our bikes across the swaying bridge, which was a bit of a thrill. 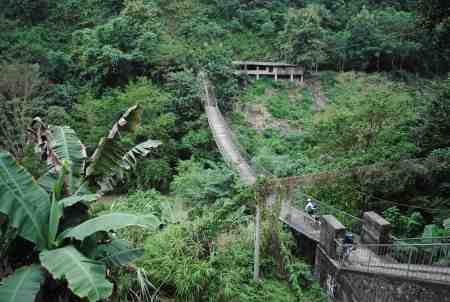 Cycling across the suspension bridge at Lahadi (MH)

At the 74 km mark, about five or six hours' cycling time from Hekou is the town of Baihe (白河). It's not very big, but it is the biggest town apart from Hekou on the route, and as it has several restaurants and hotels, it is a good place to spend the night. 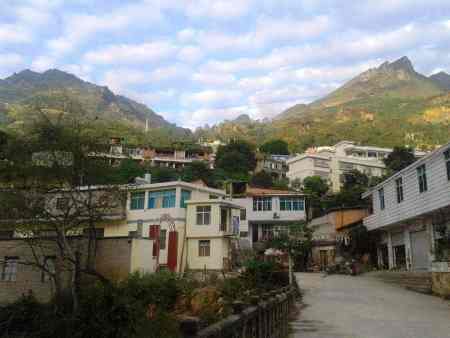 Baihe has the air of an old railroad town. As recently as 2010, a station agent still manned the crossing. A sign warns that pedestrians are now on their own to stay out of the way of passing trains. We were lucky to see one chugging through town just after dusk – its piercing horn and slow pace made it hard to miss.

We talked to some of the townspeople about the town's history and economy. It is ironic that whereas 100 years ago, when travelers elsewhere in the province faced weeks of arduous animal pack trains to Kunming, Baihe was one of the most efficient transportation connections in the region. One could hop on any one of the daily trains and be in Kunming only 30 hours later!

By 2002, the last year passengers could still board trains in Baihe, that 30 hours no longer held much appeal. We talked to some old timers who remembered riding the train, but didn't seem to miss it too much. 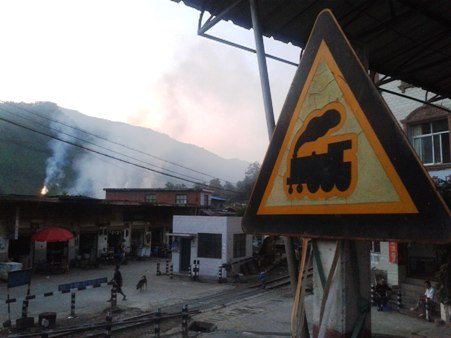 10 km north of Baihe there's a junction at Baizhai (白寨). From here, Highway 235 makes a steep ascent to Pingbian, where we hung a right, heading down toward the river. Less than one kilometer later is another junction where the paved road goes to the right – we headed straight, on the cobblestone road. This is where the cycling became more difficult. The day's remaining 27km were all on cobblestone road, which made cycling very slow.

About 13km up the road we arrived in a small settlement called Wantang (弯塘乡). This is the last place to stock up on any provisions you might need for the night. From here the river enters a narrow canyon and at times the railroad disappears completely from view, clinging to the precipice high above.

The Nanxi River in this stretch is full of boulders and waterfalls. Deep, natural swimming holes provide an ideal respite from the heat. 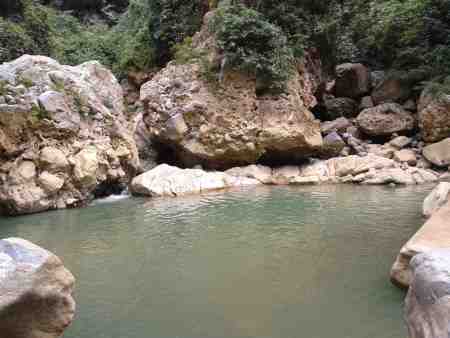 11km from Wantang the railroad temporarily left the Nanxi River valley and made a U-shaped detour up the Chahe River (岔河) valley, gaining elevation before climbing out of the Nanxi River watershed and onto the Yunnan-Guizhou Plateau. The cobblestone road also jogs to the right, running right up the middle of the "U", resulting in the interesting phenomenon of railroad tracks running along both sides of the valley. 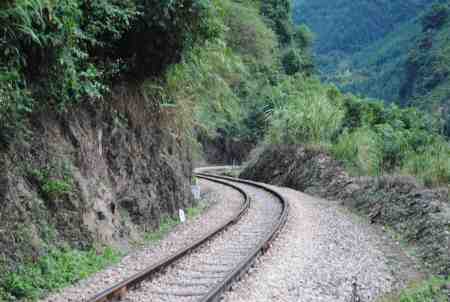 From here it's only another 8km to the final destination. The Renziqiao bridge is located at the bottom of the curve in the "U". The bridge itself is a worthy destination. With its distinctive arch, it is an achievement of design. But it's the bridge's surroundings that make it so impressive. It bridges a narrow gap between two vertical limestone cliffs, and is approached on either side by tunnels, resulting in a unique profile, which has become something of a symbol of the railroad.

Having first seen the bridge in photographs years ago at the Yunnan Railway Museum in Kunming, finally reaching it in person was breathtaking. 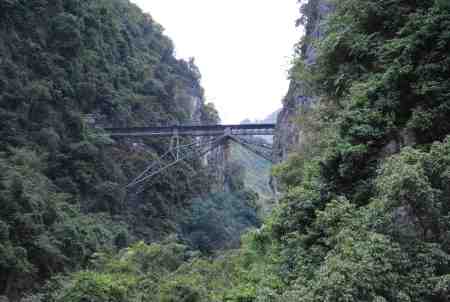 The view of the bridge from the river below (JA)

Views of the bridge can be had from anywhere in Renziqiao village. Or you can walk along the river underneath and get a view from closer up.

Back in Renziqiao Village, which is also nestled in the curve of the "U", we had planned on pitching tents and camping for the night, as there are no guesthouses in the village or tourism infrastructure of any kind in the village. We ended up spending the night in a local home at the invitation of a kind farmer, but recommend others planning to spend the night bringing camping gear nonetheless. 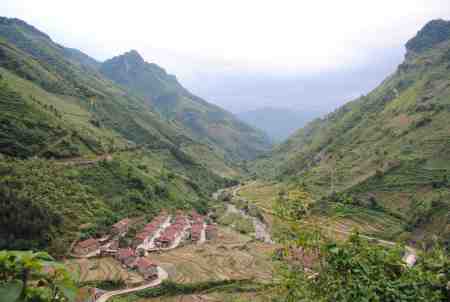 It was night when the freight train finally chugged up the valley. We scrambled out of bed to watch it make its curve around the "U" and cross the bridge. Its headlight beam was playing all sorts of tricks, spasmodically illuminating this corner of the valley, and then that, as the train made its way along the zigzag bends in the track.

The nearest city with buses back to Kunming is Pingbian, 57km away. But the route to Pingbian entails a backbreaking 1,400 meter uphill climb. We decided instead to backtrack along our previous two days' route, covering the 112 km back to Hekou in one day, which is perfectly doable since the majority of the route is downhill.

GoKunming thanks Matt Hartzell and James Affleck for this contribution. If you have a story, photo essay or video you would like to share with GoKunming readers, please contact us via our contact form.

Thanks guys, excellent story.
Did you see any steam engines, relics or operational?
I'd love to do the trip.
Cheers
Andrew

this looks awesome. how did you get your bikes to hekou? just threw em on the bus or what?

@bosnianXCII: You can throw your bike on a bus to Hekou from the south bus station, or riding there is an option.

Yes, we threw our bikes on the bus to Hekou. Literally. The bottom was all full of goods, so I kept it in the aisle next to the seats. The driver demanded a tip. James took the bus to Pingbian. His driver didn't demand a tip.
Unfortunately, no steam engines. Just diesel.
-Matt

I've seen articles about "rail bikes" in the past, bikes set up to actually ride the rails. Any thought to trying that, or the (im)possiblity of doing something like that?

The route sounds infrequently traveled enough to perhaps pull it off.

Cheerz - great adventure and write up!