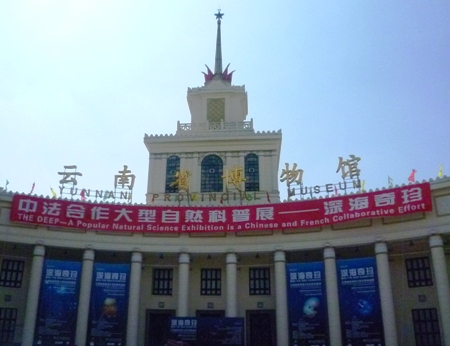 When we woke up this morning, it was raining—a perfect day to lose yourself in the halls of a museum. Accordingly we set off for the Yunnan Provincial Museum, which houses over 13,000 artifacts* and features exhibits focusing on Yunnan's history and its ethnic minorities.

At the entrance security guards asked us to check our bags for a 5 yuan deposit, refundable upon exit. At the information desk audio guides in Chinese and English were available for 10 yuan with a 100 yuan deposit, which we invested in, as this correspondent knows no Chinese.

The first floor is divided into two rooms of temporary exhibitions. Tickets are 20 yuan per exhibit. Current offerings are Deep, a deep sea exhibition hosted in conjunction with the French Museum of Natural History, and bronze mirrors on tour from the Shanxi Museum.

We were too cheap to pay 40 yuan each for what looked like two rooms worth of exhibits, so we headed straight for the second floor where the museum's collection of Yunnan bronzes is located. As soon as we arrived in the central foyer, the audio tour launched into the story of General Zhuang Qiao (庄蹻) who founded the Dian Kingdom in 278 BC. 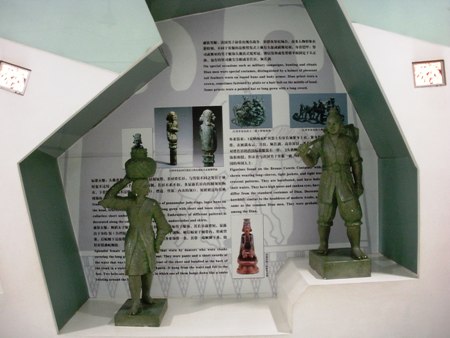 At first the audio tour descriptions corresponded to the various exhibits, but as we wandered further away from the center of the museum, the descriptions became more and more erratic.

Despite its shambolic descriptions, the audio guide had enough juicy historical nuggets to make it well worth the investment. One example: thanks to our audio tour we learned that the Dian kingdom was one of the first known sites in which men were pitted against domesticated oxen in death fights! Not all of the Chinese descriptions were translated into English, and the majority of the bronzes only had cursory labels containing the name and place where the artifact was found.

If you don't read Chinese, the best way to enjoy the museum is to treat the audio tour like a knowledgeable but slightly befuddled professor. Keep it on for the educational tidbits, and tune out the rhapsodies over workmanship of the bronzes which will try your patience. Instead wander through the room admiring the bronzes at your own pace. Although the bronzes are over 2,000 years old, they are exquisitely worked and have a quirky charm that brings them to life. 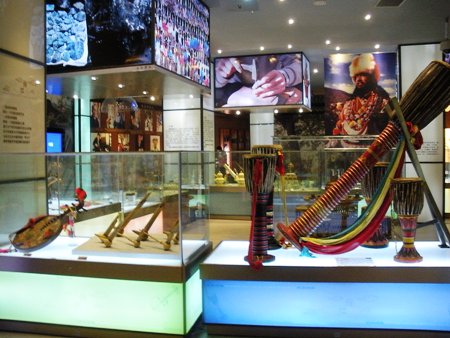 Yunnan's ethnic minorities are the focus of the third floor

The third floor is devoted to the costumes and handicrafts of Yunnan's 24 ethnic minorities. Here the audio tour mumbled something about Buddhism and then committed seppuku.

While supplementary explanations of the displays would have been nice, the handicrafts and costumes are fully absorbing in their own right. Mannequins dressed up in the costumes of various minorities provide an interesting compare-and-contrast, while exhibit cases contain a variety of handicrafts to marvel over, including Naxi scripture books, brightly colored Buddhist paintings with details worked in gold leaf, carved silver and jade utensils and wooden instruments.

Although rather small, the Yunnan Provincial Museum is good for a casual hour-or-two visit on a lazy weekend afternoon. That said, visitors who really take in all the artifacts and information on offer could end up spending an entire afternoon there.

Located on the west side of the intersection of Dongfeng Xi Lu and Wuyi Lu, the Yunnan Provincial Museum is open Tuesday through Sunday from 9am to 5pm. Entry is free, minors under 14 must be accompanied by adults and flash photography is prohibited.

A pity you didn't check out "The Deep" as it is well worth a visit.

That is, apart from the annoying Rolex sponsorship section at the end, which rather destroys the magic.

The Deep was covered in an earlier post: www.gokunming.com/[...]

I would like to go in some rainning days,haha.

The City Museum and the museum next the Minority Villages tourist attraction are also good.

Is the new Provincial Museum in Guandu open yet?