Editor's note: Adam Kritzer is a longtime Dali resident and founder of ClimbDali, a company offering guided outdoor trips. This is the second post in a series about enjoying the outdoors in Dali.

Pressed to describe opportunities for hiking in Dali, most travelers will cite the Cloud Pass (玉带路) that runs across the Cangshan mountain range with a gondola at one end and a chairlift at the other. This route is more tourist expressway than trail - but there are literally dozens of actual and potential hikes around Dali.

On none of these hikes will you encounter flag-waving tourists, chairlifts, parking lots, or any of the other unnatural trappings which seem to be de rigeur in all of Yunnan's "natural" and scenic areas. Below are a few of my favorites. 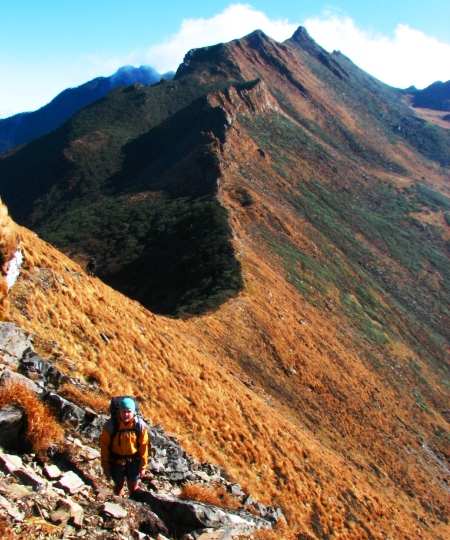 Crossing over Cangshan Mountain (翻越苍山)
Unfortunately, the main trail to the summit of Cangshan Mountain (via HigherLand Inn) is slated for irrelevance, as the area around the Horse Washing Pond (洗马潭) has already been prepared for large-scale development in the form of a gondola and what appears to be a hotel. Fortunately, there is another route, which is even more beautiful and on which you are unlikely to encounter other hikers.

The trail begins from Guangming Village (光明村), on the western flank of Cangshan, just south of Yangbi (漾濞县城). It goes straight up through pine forest, leveling off at a meadow that locals use to graze animals (elevation 3,000m). There is a water source nearby, and this is an excellent place to camp.

From here, the trail continues straight up along a narrow ridge, through rhododendron and scrub forest, scrambling over some rocks along the way. Upon reaching the summit, avoid the TV transmission facility and head north along a knife ridge. The trail is in surprisingly good condition; just don't look down, as it drops away dramatically on both sides!

Continue for about 10km until reaching the Black and Yellow Dragon Ponds (双龙潭) at 3,800m. These are beautiful alpine lakes, set against a backdrop of granite, on the eastern side of Cangshan. The area nearby is suitable for camping. From here, the trail drops down through a bamboo grove and deepens into a trench, continuing all the way down to Yinqiao Village (银桥村), about 5km north of Dali Old Town.

Huadianba (花甸坝)
About 20km north of Dali, the Cangshan ridge separates into two separate ridges, and between them lie a beautiful valley that is redolent of Tibet. Best translated as "flower meadow," it gets its name from a period in the spring, when millions of rhododendrons simultaneously come into bloom and create a sea of pink and red.

The area is best accessed via Xizhou (喜洲) — you can see a water pipe and part of the trail clearly from the bottom. Head straight up to about 2,700m, until the trail flattens and widens. According to a nearby plaque, the People's Liberation Army built a road into the valley in 1955, the remains of which can be followed all the way to the far end, where a local ecological station doubles as a guesthouse.

The valley is populated by a handful of Yi families, which use the valley to graze yaks and sheep and for subsistence agriculture. After recharging (hot shower and all; don't ask me how they got the solar panels for the heating system up there...), you can exit the valley several ways.

You can march north, and straight down to Fengyu (凤羽), head east into the lesser flower valley, which has only one house and amazing scenery, before turning north towards Laping (腊坪) or continue straight up and over to Zhoucheng (周城), which is close to where you began. 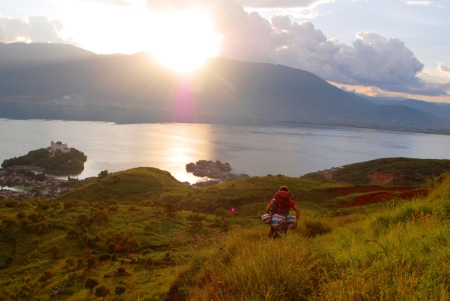 Jizu Mountain (鸡足山)
It's possible to take a bus to Jizu Mountain, but given the throngs of tourists that have the same idea, what's the point? There is a little-known trail that enters the mountain — one of China's five big Buddhist mountains — which is not only beautiful but also allows one to skirt the hefty admission fee.

Two separate trails begin from Shuanglang (双廊) and Wase (挖色) on the eastern shore of Erhai Lake, about 10km apart. Both are quite steep and difficult to navigate, but eventually converge at a water box about halfway there. The merged trail continues along a dirt access road for about 2km, before ending at the start of a steep climb into a massive alpine meadow.

There is a hermit monk who lives here as well as a massive radio antennae — thankfully, recent plans for a wind farm were scrapped. Stop in and say hello, he's very friendly! Continue up and over the final pass (3,200m) and you will catch your first glimpse of the white pagoda at Jinding Temple. 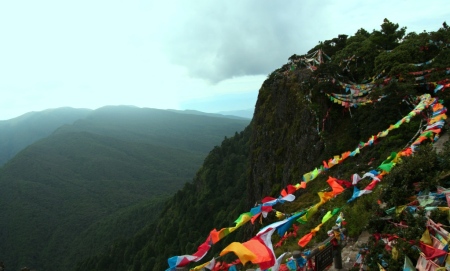 The trail is well-trodden here, and is lined with Tibetan prayer flags. It leads straight down to a small clearing, from where you must either re-ascend 500m to the top of Jizu Mountain or continue down until you reach the stone tourist trail. 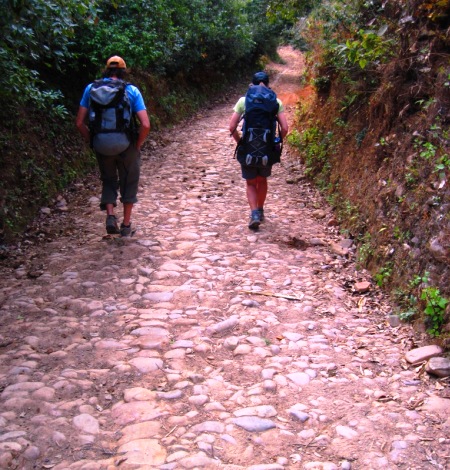 Fengqing to Weishan on the Tea & Horse Caravan Trail (顺着茶马古道从凤庆到巍山)

This 120km route was one of the key sections of Yunnan's ancient trading network, and recently rediscovered by Red Rock Trek (which also provided this photo), an operator of caravan-style trekking tours based in Dali.

Trails from the southern tea-producing areas met the road from Baoshan (保山) and Burma at Fengqing (凤庆), now an important source of tea in its own right. At Weishan (巍山), products continued north to Xiaguan and the Tibetan markets, or headed east towards Kunming.

For modern-day hikers, this trail starts in Fengqing's tea plantations, from where it's a two-day trek to the Lancang River featuring steep elevation gains and descents: approx 1,000 meters up, 1,400 meters down.

The Ming-era bridge across the Lancang was lost when the reservoir rose behind the Xiaowan Dam, so the trail has returned to the route followed by legendary Chinese explorer Xu Xiake in 1639, involving a ferry across the river and then an even steeper climb out of the Lancang Valley and over to the ancient town of Lushi (鲁史古镇), once a prosperous trading center and now one of the province's best-preserved old towns.

Beyond Lushi lies another ferry across the Heihui River, followed by yet another demanding ascent to the market town of Niujie (牛街), via the historic caravan rest stop by Chafang Temple (茶房寺). In the old days, caravans made the full journey in four days; a comfortable hike is best calculated at eight to nine days, finishing in the attractive old city of Weishan, only an hour's drive from Dali but still remarkably untouched by tourism.

Bo'nan Section of the South Silk Road (南方丝绸之路 - 博南古道)
During its golden age, Dali sat at the nexus of virtually every trading route that connected China with Southeast Asia. One particular route stands among the most important and most impressive: the Shu-Hindu Road connected Sichuan with India and was built over 2000 years ago. It has since been relabeled by historians as the South Silk Road.

The section that passes through Dali is particularly well-preserved, and is known as the Bo'nan Ancient Road (博南古道). The best place to pick up the trail is outside of Yongping (永平), just next to a large mosque. The trail runs almost parallel to the Burma Road, through pine forest and several isolated villages, over several perfectly intact sections of trail (see picture) before peaking at the magnificent Yongguo Temple (永国寺).

From here, the road leads straight down to Shanyang Town (杉杨镇) and over the Lancang River. Make your way up to a new concrete arch bridge (soon to be joined by a railroad bridge) and across to the Baoshan side. This section of the trail is also intact, and leads to the one-street Shuizhai Town (水寨镇). From here, you can either walk to Baoshan via Banqiao Town, an ancient trading hub, or catch a bus. 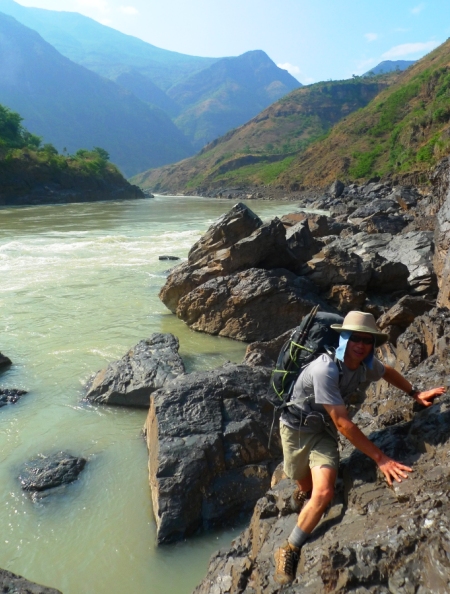 Follow the Jinsha River To Taiji (顺着金沙江到太极)
Downstream from Tiger Leaping Gorge, the Jinsha River continues carving its way through mountain valleys, eventually becoming the Yangtze River. About 50km east of Lijiang on the road to Yongsheng (永胜), two parallel trails run along the two shores of the Jinsha. 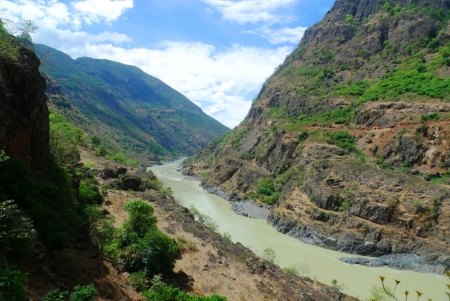 Follow either for about 7km until you reach the Jinlong Bridge (金龙桥), a 19th century wire suspension bridge that spans the river and is quite a sight to behold. 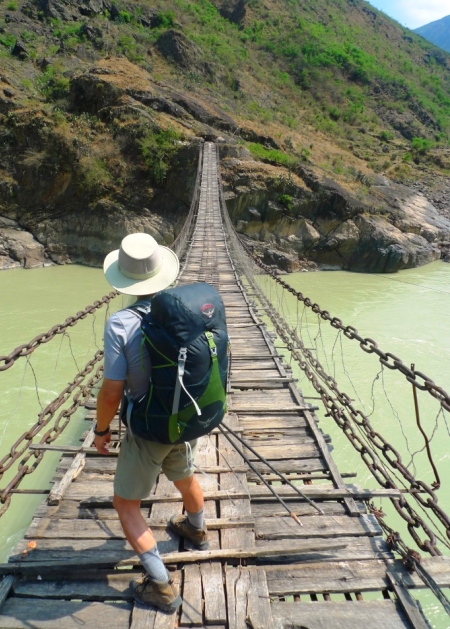 From here, continue hiking along the eastern shore of the river through isolated villages and white sand riverbanks until you get to Yong'an Village (永安村). You can hike up to the main road, or follow along the river along an unused goat herding path to Longmen Village (龙门村), where the footpath connects to a dirt road that runs along the river all the way to Taiji (太极), so-called because the river performs two dramatic twists in the shape of the yin-yang symbol.

Sadly, construction has already begun on a massive hydroelectric facility at Zhongjiang (中江). If you can't bear to continue, it's easy to bail via a newly constructed access road that leads directly to Heqing (鹤庆). Otherwise, trudge on for another kilometer until the dam is behind you and enjoy what is one of Dali's natural wonders and still a classic hike. 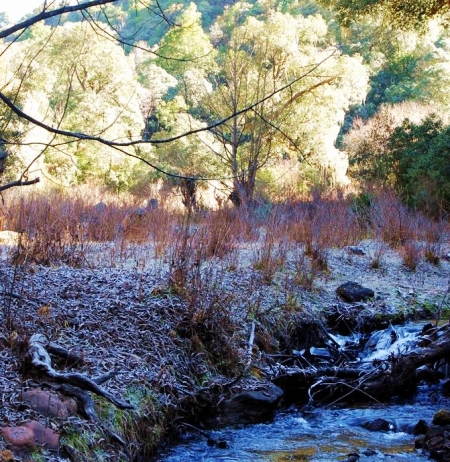 Shaxi - Mapingguan - Misha (沙溪 - 马坪关 - 弥沙)
This trail has experienced higher levels of foot traffic in recent years, due to renewed interest in the Tea and Horse Road and Shaxi's emergence as an increasingly popular tourist attraction.

South of Shaxi, this trail leads west through scrubby pine forest, and offers fabulous views of the Shaxi valley. Look down and you might see some cobblestones from the old caravan trail, which has fallen into a state of disrepair.

After several hours, you will reach Mapingguan, a tiny village nestled in the forest, where it is possible to stay and eat. From here, the trail continues in the same direction, finishing south of Misha town along the Misha River.

Photo courtesy of HorsePen 46 Guesthouse, a comfortable guesthouse in Shaxi and good source of hiking information for the area.

I went to Huadianba in 2010, up by horses belonging to the medicine factory. Guess that's how the solar panels got up there as well... can only recommend it, though it is seriously end of the world feeling, especially if you sleep up there over night and your hut gets constantly hit by lightnings...

Nice article, a bit commercial though...