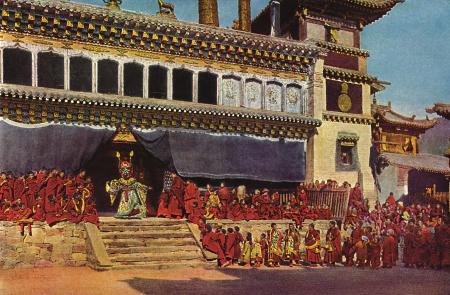 Yama, the god of death, emerges from the monastery at Choni

"Today the map has no more secrets."

At the opening of his article "Seeking the Mountains of Mystery", published in National Geographic in 1930, Joseph F Rock scoffs at this phrase, often heard in the late 1920s. Indeed, despite our GPS technology and advanced modes of transport, humanity is still discovering unknown corners of our planet today.

The human thirst for discovery pervades China on the Wild Side: Explorations in the China-Tibet Borderlands Volume II, Qinghai and Gansu, a collection of articles recounting Rock's travels from Kunming up through Sichuan and into Gansu and Qinghai between 1924 and 1927.

Whereas Volume I of this two-volume series is more characterized by discovery of the natural bounty of northwest Yunnan and southern Sichuan, this volume is defined by brutal terrain and rugged, hardy nomadic peoples, many of whom are also quite dangerous.

But it is all worth it, for Rock and the reader, as he sneaks some of the outside world's first glimpses of life in the secluded Tibetan kingdom of Choni in Gansu as well as the majestic snow-capped Amnyi Machen mountain range in Qinghai, among other discoveries.

As usual, Rock's stories are written in true old-school explorer prose and are complemented by excellent photographs that breathe life into his descriptions. The high-quality photos are even more amazing when considering that Rock was developing them on the road in western China in the 1920s.

In the kingdom of Choni in present-day Gansu, Rock is privy to a fascinating look inside the region's Tibetan traditions, including the Butter Festival and the Black Hat Dance. Once again, it is Rock's ability to use his prestige as a foreign explorer with a large caravan and plenty of gifts that allows him to develop local guanxi that open doors. In this case, it is the Prince of Choni who orders reluctant lamas to allow Rock to photograph their ceremonies, dances and butter idols. 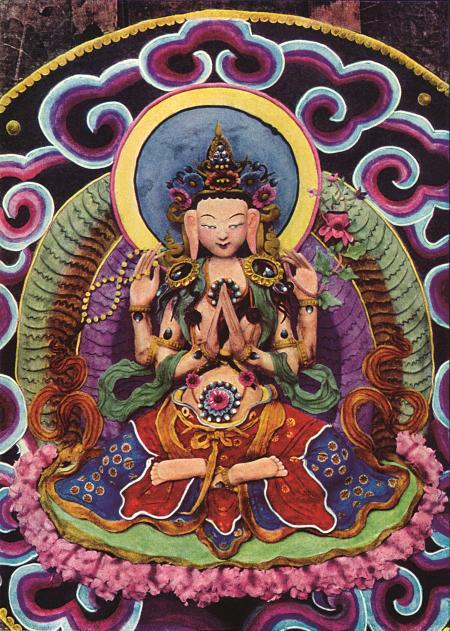 The patron deity of Lhasa, made of colored yak butter

One of the more interesting stories to come out of Choni is that of the assassination of King Langdarma, who was known as a brutal oppressor of Buddhism, by a monk named Paldorje. The story, which feels made for a modern martial arts film, is the inspiration behind the Black Hat Dance.

"Paldorje assumed the guise of a strolling black hat dancer and obtained permission to dance before the king. In the sleeve of his robe he had concealed a bow and arrow, and at the first opportunity he shot Langdarma. He made his escape on a white horse which had been covered with soot to make it appear black. Into a river he plunged on this horse, and when he rode out on the other side the soot had washed away, leaving the horse snow-white. He turned his own coat to show the white fleece lining and, thus disguised, eluded his pursuers."

Although he is fascinated by the art and culture of the Tibetans of Choni, Rock cannot help but frequently touch upon their lack of hygiene, and the general chaos of large gatherings, which are managed with birch whips, as one scene at the beginning of the butter festival illustrates:

"Below us every available inch of space was occupied, and still newcomers pushed and squeezed their way into the courtyard. From this unwashed humanity, which reeked of rancid butter, a most nauseating stench rose to our gallery. The Prince, much to my amusement, tried to rob the smell of poisonous quality by sniffing at moth balls. Babies shrieked, while their mothers tried to protect them from the whips. The lamas began their chanting in a deep, sonorous bass. Blasts from enormous trumpets sounded from the roof of the great clay Buddha." 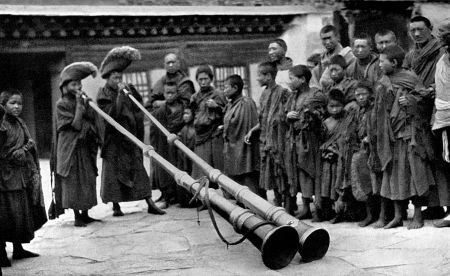 Rock's quest to find the Amnyi Machen mountain range began in 1923 when he was heading from Burma to southeast Tibet and met the famous British explorer General George Pereira, who had recently trekked from Beijing to Lhasa.

"...he told me of an amazing landmark passed on his westward journey – the great snow-capped Amnyi Machen Range, which he saw from a distance of more than 100 miles. Very likely, he remarked, the Amnyi Machen, when surveyed, might prove higher than Mount Everest. He also spoke of the turbulent Ngolok tribes and their queen, and of his own ambition to attempt a journey of exploration to their country."

After an epic trek in which he even has to root spies out from his own entourage, Rock's elation in finally beholding the Amnyi Machen from an adjacent peak is palpable. 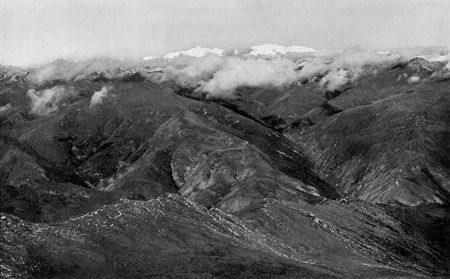 "Amnyi Machen's peaks were hidden in clouds. We had only occasional glimpses of the vast snow fields; yet the scenery was superb. [...]We lingered a considerable time at the summit, enjoying the beauty of a setting sun over the huge mass of the Amnyi Machen."

While in Gansu, Rock's journey is held up by a gruesome battle between Tibetans and Muslims. This is the most dramatic account of the perils that Rock and his caravan face in this hinterland that most Han Chinese dared not enter at the time. The intense hatred and violence between Tibetans and Muslims in this region is a recurring theme of the book – when Rock and Co. aren't actually witnessing battles, they are often discovering the remains of bloody fights.

For the most part, Rock's relationship with his assistants and members of his caravan is all business, but occasionally he shares some of his culture with them, sometimes to humorous effect, as in one encounter when setting up camp at night:

"To start their fires the Tibetans used a crude sheepskin bellows. We put out sentries, many of whom had mastiffs with them. Great was the astonishment of the tribe when I played my phonograph and when, for the first time, the 'canned' voices of Caruso, Melba and others were heard in the high grass lands. The altitude of our first camp was 10,250 feet, estimated by boiling point... I studied these Tibetan nomads. A swarthy, stalwart lot they were, wearing large sheepskin coats with long sleeves.... They called all foreigners 'Urussu,' or Russians. My phonograph they called a 'Russian magic box.'" 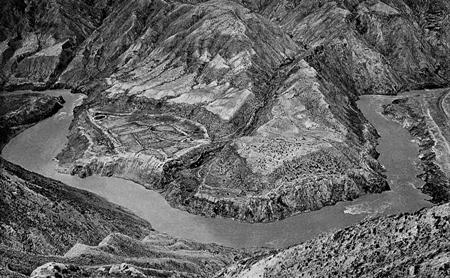 Days later near the gorges at the upper reaches of the Yellow River, more culture clash ensued:

"The valley about our Mamo Zhung camp is fairly swarmed with wild fowl, and I feasted. This amazed the nomads, who consider fowl and eggs unclean. Here again I set up my phonograph. The men roared with laughter at the pathetic songs from 'La Boheme' and 'Pagliacci.' Sitting about, listening to music, they smoked, lighting their pipes with smoldering yak dung. I bought fuel here, paying for it with needles and thread."

Even more so than the photographs he took, Rock's words are a snapshot of a world that is long gone but not entirely disconnected from the present. Both this book and the preceding volume are excellent sources of insight as well as inspiration for travel ideas in China's west, a region that is still little understood by outsiders, be they Chinese or foreign.

China on the Wild Side: Explorations in the China-Tibet Borderlands Volume II, Qinghai and Gansu, published by Caravan Press (2007) is available at Mandarin Bookstore and Prague Café's Beichen location. It can also be ordered online at mandarinbooks.cn or Amazon.

Chris - how much is the book (or the two volume set)?

@chris: Thanks much. Will take a look - see if the books are good coffee table material.

whoa, a unique eye to view china, i ve nerver heard the tibetants and the muslimus mess with each other before

@ miaolimiaomi: Actually - in China, they have a long history of animosity reaching back to around the 3 kingdoms era - I think. Perhaps even earlier still, but I vaguely recall reading about a few border wars around the end of the Han Dynasty (could be wrong though - Chinese history is SOOOO long I always get the dynasties mixed up.