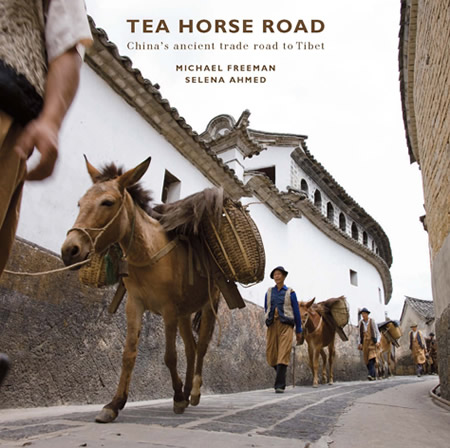 The first thing one notices about the new book Tea Horse Road: China's Ancient Trade Road to Tibet is its size.

In the era of iPads, Kindles and other ultra-slim digital readers, it has become easy to forget that publishers are still printing big, beautiful hardcover books. And this one is certainly big: it is a 2.9-kilogram (6.3-pound) one-foot by one-foot testament to the fact that print still beats digital as a format for enjoying large glossy photographs.

The book's size is also fitting, given its subject's grand span of both time and distance. The Ancient Tea and Horse Road (茶马古道) was a network of more than 3,000 kilometers of paths that were plied by horse and mule caravans from the 7th Century until the 1940s. At its height, this trade route linked Yunnan and Sichuan with Tibet, Southeast Asia and even India, facilitating the flow of not only goods but ideas and cultures as well.

Brimming with gorgeous wide-format photos from the old trading posts and paths that made up this regional lifeline plus insight into its significance, Tea Horse Road is the result of years of work by photographer Michael Freeman and ethnobotanist Selena Ahmed.

From the steamy lowlands of Xishuangbanna to the otherworldly highlands of Tibet, Freeman and his camera spent two years wandering the route in search of images that illustrate not only the role that each stopover played in the network, but also the people who gave it life.

Four years of doctoral research on the region form the foundation of Ahmed's commentary, which narrates the difficult journey made by tea leaves picked by Bulang and Akha peoples in the mountains of Xishuangbanna to the teapots of Tibet.

Rather than try to recreate the Ancient Tea and Horse Road of days long gone, the book uses history to highlight both the continuity of traditions that have survived over time as well as the change brought by the creeping of modernity into this remote corner of Asia. 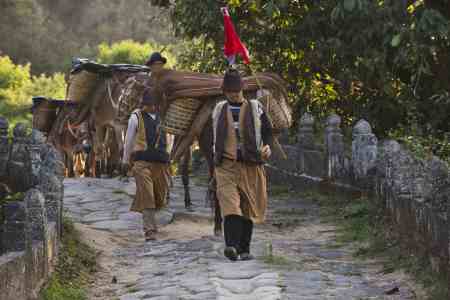 Old paths on the Ancient Tea and Horse Road are still in use today; © Michael Freeman

The book begins with a useful map and a helpful overview of the ground – both figurative and literal – that the book will cover. Ahmed uses the first main chapter to introduce the planting and production of Yunnan's Pu'er style of tea, which along with teas from Sichuan were among those most commonly shipped to Tibet.

Ahmed focuses on the highest grades of Pu'er, produced from broadleaf varieties of the same camellia sinensis plant that produces all of the world's non-herbal tea.

These top quality Pu'er teas, which are named for the prefecture that was the historical trading center for Yunnan tea, are likely similar to the Yunnan teas that Tibetans historically favored. These teas are different from much tea produced in the world today in that they are made from older plants growing in agro-forests and tea gardens, where the plants exist in their natural ecosystems and often reach heights of ten or more meters.

Agro-forests in several areas surrounding Jinghong are used by Ahmed as examples of how this tea is grown, processed and then sometimes aged for up to several decades before consumption.

Ahmed offers a novel explanation as to why tea grown in a natural settings tastes better than tea grown artificially fertilized in neat rows in plantations. Most of the chemical compounds that imbue tea with its aroma, flavor and stimulant and health properties actually serve as the plants' natural defense mechanisms, she writes. Therefore, tea grown in a natural ecosystem packed full of competing organisms will produce higher levels of these chemicals than tea grown in artificial monoculture plantations. 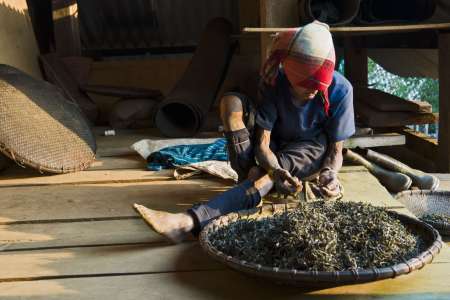 The prose is vivid, but its structure and rhythm sometimes contain a hint of academic rigidity that one senses could be loosened to beneficial effect. But that aspect of the writing can be forgiven in light of the myriad fascinating details that emerge throughout Tea Horse Road.

There is plenty here for the total Pu'er neophyte who doesn't know the difference between traditionally prepared shengcha and artificially aged shoucha, as well as for readers who are relatively well-acquainted with Pu'er but don't know as much about the culture from which it arises. For instance, we learn in the first chapter that among the upland ethnic groups that produce quality Pu'er, the Bulang people are unique among groups such as the Akha (Aini) or Lahu for having adopted Buddhism instead of retaining animist traditions.

As Ahmed guides the reader through the landscapes and cultures of the old caravan routes, it is rewarding to flip forward to the end of each chapter and take in Freeman's exquisite corresponding photographs.

In one panoramic photo after the first chapter, women of the Bulang ethnic group are depicted wearing brightly-colored traditional clothing and picking tea in a verdant agro-forest. Many of the women have climbed into the tea trees to pluck the young leaves and their garb punctuates the green forest like the indigo, aqua and pink plumage of a flock of tropical birds. 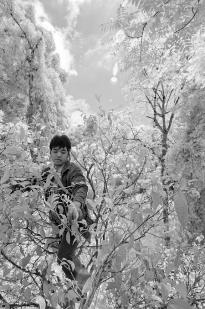 Freeman also shoots some photos with a special sensor in his camera that collects from the non-visible infrared part of the spectrum. Because plants scatter infrared radiation, shots of tea forests and plantations take on an ethereal hoary glow. These shots have a fragile stillness both beautiful and post-apocalyptic.

As the book progresses it shifts focus from tea production to tea distribution along caravan routes that have existed for thousands of years. Names like "Tea Horse Road" or the occasionally used "Southwest Silk Road" are misleading because they make it sound as if there was only one path: it was in fact a network of trails, some more important than others, carrying a dizzying array of goods. Notes Ahmed:

The entire network of the Southwest Silk Road linked cultures and natural resources between Yunnan, Sichuan, Tibet, Southeast Asia, India and Nepal. Caravans also traveled to the Chinese provinces of Guangxi and Guizhou in the east. Historian Shen Xu notes how the Southwest Silk Road was crucial in facilitating interactions between China and its foreign neighbors.

Just as Yunnan is re-establishing itself as a regional trade hub, it was once the linchpin of this extensive trade network. This was partly because of its good tea, ample natural resources and central location. But it is also because its beguiling topography gave the Yunnanese, with their knowledge of the local mountains, an advantage in operating caravans.

For tea leaving Yunnan, the most important trade route went from southern Yunnan to Dali, and then through Lijiang, Zhongdian (Shangri-la) and Deqin before it rejoined the upper Mekong valley. From there it headed north into Tibet, cutting westward to Lhasa. There was also another more arduous and hazardous route from southern Yunnan to Lhasa, straight up through the Nu River (upper Salween) valley which rejoined the Dali route in eastern Tibet. 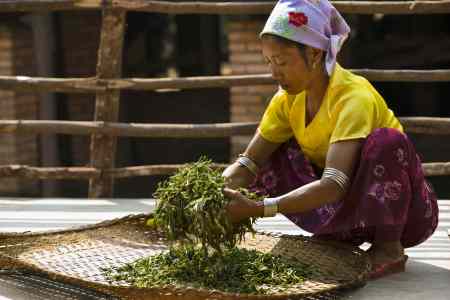 The remainder of Tea Horse Road explores other branches of the trading network, including those linking Yunnan to Myanmar and Sichuan to Tibet, as well as the political, military and cultural implications of this trade for the governments involved. It is here that we learn that the Burmese tradition of eating aged tea leaves was brought to them along the Tea Horse Road from the Bulang people. There is also some interesting conjecture about when tea was first brought to Tibet and the culturally delicate issue of from inside which modern nation's borders tea plants first appeared.

One striking aspect of this book is its honesty about the intrusion of the modern world on these storied trading towns. Freeman doesn't crop out plastic bags sitting on the floor or mass-produced decorative posters on the walls. Nor does his lens shun the drab griminess that characterizes many of Yunnan's villages, even in areas that produce great tea.

Ahmed does a commendable job of presenting the complex history behind the Tea Horse Road, as well as Chinese tea culture, in easy-to-understand terms. That said, she is also comfortable using modern scientific language to refer to, for example, "...the astringent taste created in the processing of black tea, as green tea polyphenols transform into black tea polyphenols such as the thearubigins and theaflavins."

Tea Horse Road is the first Yunnan-focused book of its kind and quality that we've seen so far. We look forward to more.

Amazing! I have a friend in Japan who is studying the properties of tea and works in a tea-selling shop. I will tell her about this, thanks!Am still coming to Yunnan but not this fall, in the spring. BB 26 Jult 11

I saw this book in a library when I was in the United States last year. It's great! But I'd never seen it in any bookstore in China. Where did you get your copy, Dan?

Sorry to say, I'm not sure. A copy showed up in our office one day so I read it and reviewed it.