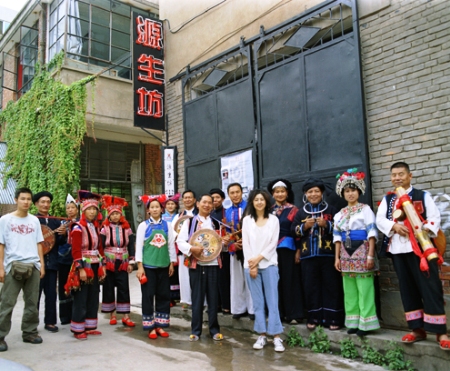 Liu Xiaojin (center, in white) with performers at Yuansheng Fang

Yunnan is China's most ethnically diverse province, but you would hardly know that here in Kunming. Very few ethnic minority residents of the city wear their traditional clothing and most have become more connected to a rapidly modernizing city than to their traditional rural roots.

Residents of or visitors to Kunming have few chances to experience authentic Yunnan minority cultures. In recent years, restaurants serving out-of-the-ordinary delicacies have been the main platform for ethnic culture in the city.

For six years, Yuansheng Fang (formerly called Yuansheng Studio in English) was – to our knowledge – the only venue in a Chinese city where the authentic music, singing and dancing of Yunnan's minorities could be experienced.

Tucked away inside Chuangku (The Loft) on Xiba Lu, the tiny but cozy theater at Yuansheng Fang was home to regular performances of "Sounds of the Yunnan Countryside", a musical voyage through this province's countryside, where life moves to a different rhythm than Kunming's bars and nightclubs. Video highlights of a 2007 performance can be viewed in this post from our archives (requires VPN/proxy in China).

Yuansheng Fang founder Liu Xiaojin (刘晓津) has spent most of her life here in Kunming and most of the last decade promoting ethnic culture as it is in Yunnan's most remote regions. We spoke with her to find out more about what Yuansheng Fang has accomplished over the years and the challenges it presently faces:

GoKunming: How did you first become interested in Yunnan's ethnic minorities and their cultures?

Liu Xiaojin: My original line of work was as a documentary director at Yunnan Television. In the summer of 1994 I got to know a group of old minority performers while shooting a documentary. At that time they were at the Yunnan Ethnic Cultural Transmission Hall (云南民族文化传习馆), founded by Mr Tian Feng. The performers wore the same traditional ethnic clothes they'd made by hand. They sang and they danced. It was earthshaking stuff, their singing and dancing was passionate unlike anything else I'd seen before.

That first performance moved me to tears. I didn't think the folk music and dance these people demonstrated would be so powerful. Afterward, in the course of shooting the documentary I saw firsthand that China's recent development had pushed minority cultures to the brink of extinction. So I decided that I'd put all my efforts into doing something for ethnic culture.

GK: Why did you start Yuansheng Fang?

Liu: In 2000, Tian Feng's Yunnan Ethnic Cultural Transmission Hall was disbanded. From 2002 through 2004 I received many calls from former teachers and students. People like the old Yi master Hou Baoyun (后宝云) would call and say, "Teacher Liu, it's too much for us.

"Teacher Tian Feng made us understand the importance of our ethnic culture, but now we're in our villages and if we want to sing our traditional songs, we have to keep it down out of fear of being laughed at by others. We can't find a place to dance our old dances."

It was because of this that with the help of our folk performers we were able to open Yuansheng Fang in August 2004.

GK: How do you cover your costs?

Liu: Yuansheng Fang's full name is "Yunnan Yuanshengfang Ethnic Culture Development Center". It was formally registered with the Yunnan Provincial People's Government as a nonprofit folk organization. I paid for the registration. The backbone of what we were doing was a small handful of workers plus 40 to 50 performers.

I worked with our performers on a project cooperation basis. Normally they live in small villages, planting crops and taking care of basic survival necessities. Here in Kunming I raised some funds through my own personal network, after which we got to work.

There were two major aspects to our work. First was to set up a program in the countryside to promote the passing on of ethnic music and dance in which elder performers teach youth their own traditional songs and dancing. Second was to find opportunities for folk performers to earn additional income in the city by performing what they were teaching in the countryside.

In 2005 after returning from performances in the United States, we received a three-year grant from a donor from Hong Kong, which we used to set up a small theater in the Chuangku [Loft] compound. We also went to the countryside to help old performers to set up programs to pass their traditions on to the next generation.

From 2006 through 2008 we received several small additional grants from another Hong Kong donor as well as from artist Zhang Xiaogang and four women from New York. The remainder was a considerable amount from myself and my own family.

In the wake of the 2008 international financial crisis, our sources of funds have dried up completely. So at present we're searching for funding and until then won't be able to move forward. 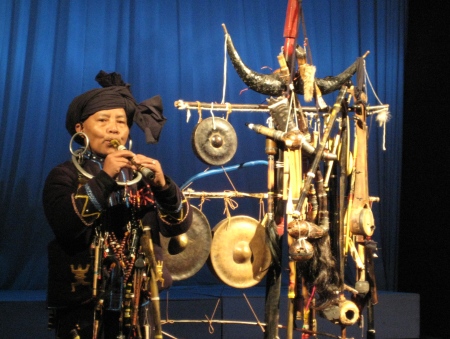 GK: Who are Yuansheng Fang's performers?

Liu: Yuansheng Fang has a group of folk performers who are masters of their art. We have Yi, Wa and Hani performers. Altogether seven different branches of these three minority groups are represented.

Some performers are in their 60s or 70s, like Yan Bing (岩兵), who is 60 and known as the king of Wa music. Yan's father was a Wa tribal leader in Ximeng County in Yunnan's Wa region. Yan himself can play more than 60 kinds of instruments, all of which he made himself. A Jiawen (阿家文) is 70 years old and is of the Nisu branch of the Yi people. He is still a master of the sixian (四弦), a four-stringed instrument played like a guitar.

Our younger performers are in their mid-thirties. Jin Jiufen (普旧芬) is a 35-year-old Yi woman from Lüchun. She's from a village renowned as the home of the traditional shengu, or spirit drum (神鼓), which she's taught to many girls from different villages around Lüchun.

Liu: Our performers have been to the United States, Beijing, Shanghai, Chengdu, the Lijiang Snow Mountain Music Festival. For several years they also performed in our theater in Chuangku for six months out of the year. We've also introduced traditional minority culture to students at Yunnan University.

GK: When was the last time Yuansheng's troupe performed onstage at your theater in Kunming?

Liu: The last time that our troupe performed on the Yuansheng Fang stage was December 22, 2009. At that time we were already having serious difficulty covering costs, but I didn't want to see our performers' livelihood get cut off. I put up the money to bring 16 of our folk performers up from the countryside for a special winter solstice show. They put their heart and soul into their performance and it was a great success.

GK: How did the 2008 financial crisis affect Yuansheng Fang?

Liu: It had a massive impact on us.

Originally, our primary sponsor in Hong Kong had been very satisfied with what we had done during the three years in which we he had supported us. He had expressed a strong interest in continuing to support Yuansheng Fang, but by the second half of 2008, the financial crisis had hit him hard, there was no way he could continue to support us.

We had also been in contact with the Ford Foundation about expanding the scope of what we did and had generated interest from He Jin, the foundation's China director, but the financial crisis destroyed that opportunity as well.

Liu: We would like to bring our troupe back to Kunming to perform in our small theater two or three times weekly from June through November every year.

But we can only take in money via the ticket booth at this point, and a cut of ticket sales isn't enough to cover their transportation, lodging and food as well as their salaries. The only way we'll be able to resume our performances is if we are able to acquire sufficient funds.

We're also doing what we can to find funds for our cultural preservation program in the countryside, which is also a worthy cause.

GK: What would a revived Yuansheng Fang bring to Kunming?

Liu: Yunnan is one of the most popular travel destinations in China and is popular internationally as well. Its unique landscapes and rich ethnic culture are major reasons that people come here.

For many travelers, Kunming is the gateway to Yunnan. But the fact is that if you have a short time here and want to experience authentic minority music and dance, you'll quickly find that this is quite difficult.

This is because most of the performances out there have been altered to the point where it's obvious that you're not experiencing real minority culture. Even if you're willing to put up with exhausting travel to scour the countryside in search of genuine minority musicians, you'll find that they're few and far between. So much so that you could say they're nearing extinction.

These people have a different kind of existence. Their work is in the fields, mountains and forests. But at Yuansheng Fang, the music, singing and dancing have always been the way they are in the countryside, and the way they have been for generations. Our performances are not just authentic, they're also full of variety and can be very moving.

Our performers, all of whom are from remote villages in Yunnan, provide the audience with a unique window into the world of minority music and dance. Opportunities in the city to see performances by true peasant artists are very rare, which makes their music and dance extremely precious in a city like Kunming.

If we can revive our platform here in Kunming, I believe it would be well-received by tourists and would become a point of pride for the city.