China is currently upgrading its national rail network and has declared its ambitions to have 42 high-speed rail lines totaling 13,000 kilometers (10,000 miles) in operation by the end of next year. It is also building such lines in other countries and has quickly become the global leader in high-speed rail.

Much of the planned expansion of China's rail network will take place in Yunnan, where rail will link previously unconnected cities as well as branch out into Southeast Asia. Despite being behind much of the country in terms of rail connectivity today, Yunnan was actually one of the earlier parts of China to have rail lines.

In many ways, the story of Yunnan's earliest railways is the story of the outside world creeping into this part of China. Eager to learn more, we headed to the Yunnan Railway Museum on Beijing Lu. 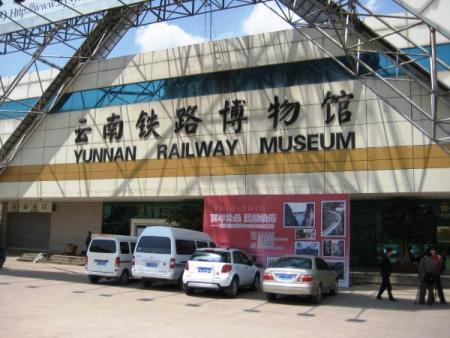 Railroads first started popping up in China in the late 19th Century but were generally not appreciated or welcomed by local officials – some rail lines such as Shanghai's Woosung Railway only operated for a short time before being destroyed.

A couple of decades later, resource-rich Yunnan was being eyed by colonial France, who had already set up shop in nearby Indochina. Between 1904 and 1910 France built the Yunnan-Vietnam Railway linking Kunming with the Vietnamese port city of Haiphong – at great cost to French taxpayers.

In the 1930s, the British empire, having seen the benefits France derived from its railway into Yunnan, began building its own rail line into Yunnan, which was connected to the national rail network it was building in its colony Burma. World War II interrupted construction of the Yunnan-Burma Railway, and the line never became operational.

The Yunnan Railway Museum is nestled between Kunming North Train Station's tracks and what for now is a huge construction site. When we visited, the adjacent parking lot was full, but the museum was empty save for the two women knitting at the ticket counter. Both ladies turned out to be quite helpful in explaining that the museum is divided into two parts, one largely historical, with photos and railway memorabilia, and the other a railway shed housing old trains.

The displays in the museum proper chronicle the construction of Yunnan's railway network, especially the routes running from Yunnan into Vietnam and Burma. Placards are heavy on history and technical detail and feature Chinese and English commentary.

Railways were not always of a standard gauge, or width, and still aren't today. Most of Yunnan's original tracks were laid with a 1,000mm gauge – with an even narrower 610mm gauge between Jijie and Gejiu – instead of today's standard gauge of 1,435mm. Yunnan's mountainous terrain was the reason that tracks had to go narrow. 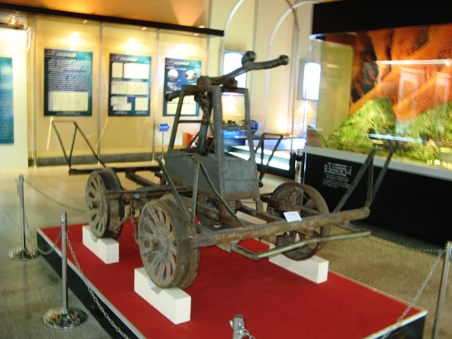 The museum's first room concentrates mainly on when the railroads were built, with the larger second room explaining how the tracks were engineered and where they ran. In addition to containing 100-year-old black and white photos of northern Vietnam as well as Chinese towns such as Jianshui, this part of the exhibition has items once used by rail workers plus a large-scale diorama of Yunnan's first rail network under glass, upon which you can walk.

The overhead lights were turned off in this room, probably due to a lack of visitors, but a guard was more than happy to turn them on and give an impromptu tour.

After viewing this section of the museum, we exited through the front entrance and were led about 200 meters down an adjacent alley to where the trains are housed. Inside are three steam-powered locomotives and one diesel engine.

Although there are signs warning against touching the trains, patrons are allowed to move freely about them. We went into the conductor's compartment of all three steam engines as well as through the attached passenger cars. The smell of coal permeated everything and the passenger cars were little more than boxes lined with low benches.

The only train visitors are not allowed to explore is a French-made Michelin diesel engine. Manufactured in 1914, it stands out against the other models because of its streamlined design and rubber tires. This display area also houses engines built in the US, Japan and China. 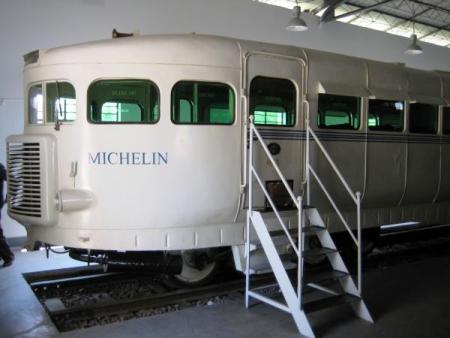 For us, the train depot was the highlight of the museum. Seeing the old trains, one of which was in use for more than 65 years, is a nice window on Yunnan's recent past. It is also a very kid-friendly experience removed from the usual city madness.

The Yunnan Railway Museum is open every day except Monday, from 9am to 4pm. Entry is 10 yuan per person.

Great article!
I lived and worked in Kunming for a couple of years and I'm a serious (steam) train buff but never bothered to visit...certainly make the effort when I'm in town next week.

Really interesting. I've lived in Kunming for years, seen the Museum sign often, but never visited. But it's on my "to do" list now. Those poor ticket sellers may get less knitting done now!

The museum building is now closed because of construction but the separate building with the train cars remains open. The hours are the same as stated.

I read all Kunming Newsletters.Find them interesting and informative. I am married to a Chinese citizen, who currently resides in Shenzhen waiting visa approval. We discuss living in Kunming someday and are interested in the housing market. I am a steam locomotive buff and hope to visit the Yunnan Railroad Museum someday

The museum made a big mistake when painting the word "Michelin" on the train. It was actually named "Micheline" by the manufacturer.

Does anyone know what the timetable is for the light trains that still run from North station? I know it was on this site somewhere, but half an hour with the annoying Search Function has left me none the wiser.

Shizui station has been closed. I do not know if the westward run still goes and till where.

The passinger service is about to be closed completely but on the otherhand the Narrow Gauge Railway museum is renewed and was suposed to be opened in January. I dont know if this really happened. Will check it out some day.

Thanks @Philou and @Liuer. Helpful. I was hoping to take it West, catching it at the small station behind "Think UK". Anybody confirm it's still running and what time it stops there(approx)?

Would also love to know what keywords you used for your search, @Philou. I tried "train times", "local train", "narrow guage" and various combinations, but never found the article you linked to. What did I miss?

@ocean: I did search for narrow gauge too, it works with the right spelling :)

Doh! ;-)
In something of a defense, I didn't know it was "narrow gauge" until I followed your link. Thanks @Philou.

Just for the record, the Museum has been completely updated since this article and is much better as a result. For example, the real trains are now incorporated into the museum itself rather than in a depot down the road. Well worth a visit.