Getting Away: Trailrunning Tiger Leaping Gorge

For many years, travellers in Yunnan have known of Tiger Leaping Gorge (虎跳峡) as one of the province's most stunning treks. Flanked by two 5,000-metre-plus peaks, the gorge is cut by the Yangtze River (长江)—known in its upper reaches as the Jinsha River (金沙江)—north of Lijiang, and runs roughly southwest to northeast. The gorge's name derives from the folk story of a tiger leaping the gorge to evade pursuers. 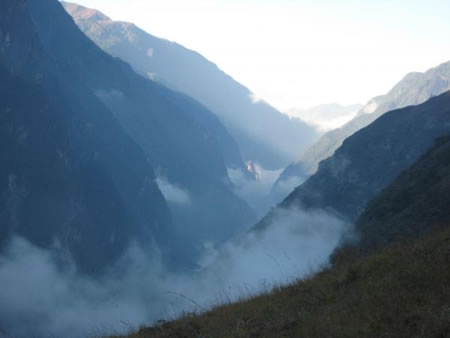 From Lijiang many travellers get to Tiger Leaping Gorge via the the town of Qiaotou (桥头) at its southwest end. The gorge's northeast end is also accessible from Lijiang via a different road to the town of Daju (大具). At Daju travellers need to take a ferry across the river and proceed along a public road and into the gorge to reach the trekking trail.

This paved road, on which maintenance crews wage a never-ending battle against rockslides, passes through the length of the gorge. The real juice, however, lies on the so-called 'high path' — an all-trail route of roughly 20km that takes you up to a high point of 2600m above sea level.

The high path through the gorge has long been a favourite hike for guidebook-toting backpackers. It's such a feature of Yunnan travel, many have trekked through it more than once. Having been there a couple of times before, we paused to think: how can we make it a little more edgy? We decided to cram on our running shoes, and take it fast.

We started at the eastern end of the high path, having stayed the night at Tina's Guesthouse. Something that has changed for the better since we first hiked the gorge is provision for baggage. Several years ago, the only option was to stash your main pack at a guesthouse in Lijiang or Qiaotou and hike with a day pack. Tina's now runs a baggage transfer service to a couple of guesthouses further along the route.

As we were planning to take the whole route in one go, we chose to have our bags sent to Jane's Guesthouse in Qiaotou (20 yuan transfer fee, 5 yuan per bag storage fee). After breakfast at Tina's, we checked in our bags, grabbed a map, and hit the trail at 10am.

The workout provided by the steep start soon took the edge off the chilly November morning. Due to the high sides of the gorge, it took a while to get into sunlight, after which it became much warmer. After this initial ascent, the trail settles into a fairly benign contour path, tracking along the side of the rocky gorge, crossing waterfalls and passing through small villages. Along the trail, there are several guesthouses, where one can either stop for the night or refuel for the onward trip. 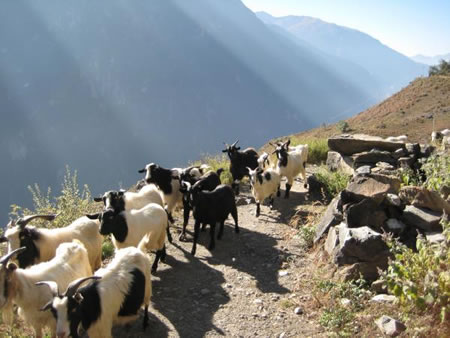 For travellers going in the opposite west-to-east direction, the biggest challenge of the trail is the feared '28 bends', a series of tight switchbacks that lead to the trail's highest point. Coming from the east, the other side of the '28 bends' ridge is also quite a challenge. 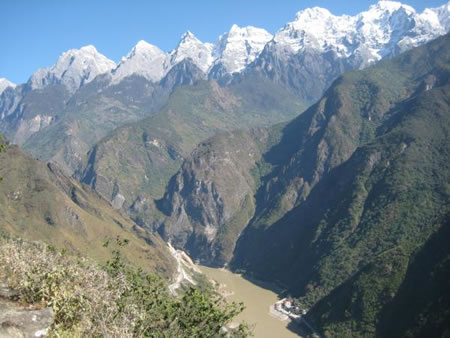 Going towards Qiaotou, after the highest point, the trail drops lower across foothills, and eventually to the road. We stumbled into Jane's Guesthouse, after a squeak over four and a half hours on the trail, and set about rehydrating and refuelling. Staff there were able to set us up with minibus transport (35 yuan) to Lijiang. 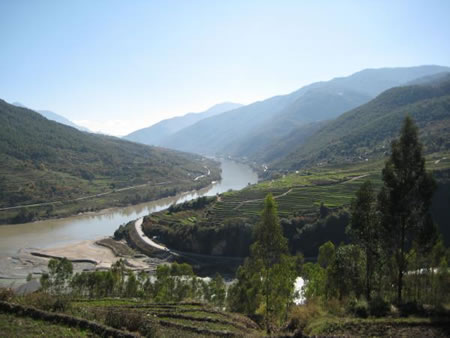 The trail is passable all year round. While it's cold in winter, the cold dry winters in Yunnan mean that the trail is less likely to feature the mud, landslides and swollen waterfalls of the wetter summer months. A clear sky helps as the warmth of the sun makes for a more pleasant hike, but it's worth taking precautions against the strong ultraviolet.

Qiaotou can be reached from Kunming by taking the night bus bound for Shangri-la, and telling the driver in advance that you wish to stop there. This puts you at the western trailhead in the early morning, allowing plenty of time for the trail. For those averse to travel by overnight bus (and who could blame you), it is also relatively easy to catch an overnight train or early flight to Lijiang, hop on a bus bound for Shangri-la, get off at Qiaotou, and be on the trail by early afternoon.

Nice to see that you did this. The whole time I was hiking it last spring I wished I had been wearing my running shoes instead of my hiking boots. It would've been a lot of fun. As it was, going the opposite direction, I did stop for a beer at the Naxi Family Guesthouse before taking on the "28 bends", which made that portion a lot more bearable.

I just did the Gorge trek for the third time earlier this week. It's a classic and really gorgeous, even in the winter when it's not so green.

But there are definitely some changes going on, including more new construction, widening of the road, new power lines and tour groups riding on horseback on the high trail. My recommendation, see it now if you haven't already.

Anyone planning on going there some time between 7. and 14. of January? I'm looking for travel companions, so please contact me :)

By the way, the gorge is free of the 70 yuan entry fee and barred to tour buses through the end of this year because of road maintenance.

I have lived in Kunming for 4 years but have never been to the Tiger Leaping Gorge, it sucks and if they are working on the road and shit, I want to do it as soon as I get back to Yunnan again in March. You guys mentioned a night bus to Shangri-La, which bus station does it start from?

But you arrive at Qiaotou really early, usually around 4 or 5am.

In august 2012 I will take a group of 4 people there. They are around 50 years-old and they want to know if it's possible to do a 2-day trek.

Is it too hard for their age? (they did some trek before but not experts)
Is there an easier trail?

Better to stay overnight in some guesthouse?
August is it very rainy there? is it dangerous because of the rain?

Thanks for your help!

August is certainly not the best month to go. Even if it does not rain, the mountains are most of the time shrouded in clouds. Landslides are the biggest risk, particularly if one attempts to cross a recent one.

Properly done, the walk is not difficult and there are some ways to cut out the more boring bits. I would suggest taking a car up to a little teahouse, called something like Sunrise Guesthouse where the trail branches off the dirt road that goes up to some village. (Starting from Qiaotou the walk is first along the road, then up the mentioned dirt road, before it becomes a trail.) The best guesthouse the Naxi Family GH, IMHO, then comes after a not too difficult walk. It has the nicest views in the afternoon (clouds permitting) and is not as crowded as Halfway House. The second day would take you through the 18 bends and the highest point to Halfway GH for lunch (not many people there for lunch, many Koreans seem to arrive after dark, hiking all the way from Qiaotou), and after lunch down to the road at Tina's, from where you could take a car back to Lijiang (the walk is then all along the road).