By Chris Taylor in Features on December 1, 2010 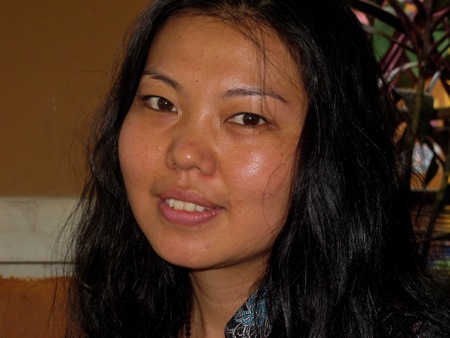 For travelers on the Yunnan-Southeast Asia trail, Mei Mei Café has for many years been their first or last taste of café culture in China. GoKunming recently visited Jinghong in Xishuangbanna and found Mei Mei's still going strong in yet another new location, but still in the same general area that has nurtured the travel scene in China's slice of the tropics since the late '80s.

As for Jinghong itself – where development has churned through the city no less rapidly than anywhere else in China – change appears to be largely for the better. The city is cleaner than it was several years ago, the seedy pink glow of side-street watering holes has been banished, and a mañana-like somnolence reigns on the unhurried, palm-lined streets of the city.

If the recent spate of cold snaps in Kunming is prelude to an unusually cold winter, Jinghong offers an inviting retreat in the months ahead – particularly with road travel reduced now to nine hours (approx 190 yuan) from the southern bus terminal. Take the 10am seating bus and be far south in time for T-shirt-weather beers and Dai-style curry – or a Mei Mei pizza.

We spoke with Orchid Zhang, who has been running Mei Mei Café since 2000, about her path to Jinghong and the challenges of running a small business there:

GoKunming: Where are you from?

Orchid Zhang: I was born in Dali. Not in the Old Town, but in Xizhou [Around 18km north of Dali Old Town]. Actually, I'm not even from Xizhou itself. I grew up in a village around 10 minutes east of the main town towards the Erhai Lake. I went to middle school in Dali – the No 1 Middle School, which is on lower Renmin Lu.

GoKunming: Was it natural to go into tourism, growing up in Dali?

Orchid: Yes, when I graduated from middle school, I joined a tourism program the school offered and went to work at a travel agency on Huguo Lu, now called Foreigners' Street. I was selling tickets, organizing tours, learning to deal with foreigners – what they liked and didn't like.

Orchid: I can't say exactly, but I wanted something different and I wanted to find somewhere with more opportunities – Dali was already full of cafés and travel agents. I think, basically, I wanted a change. But it wasn't easy at first. I arrived in 1999, and that first year was hard. I did odd jobs – teaching Chinese, working as a tour guide. But the next year my sister, A-chun, and I got a chance to take over Mei Mei.

GoKunming: How long had Mei Mei been running then?

Orchid: Actually, it had been there, for a quite a long time. It was opened by an Akha [Aini] girl called Chu-chu in, I think, 1990. The original Chu Chu Café, as it was called, was opposite the Banna Hotel. She only ran it for a year before marrying an American and leaving. Mei Mei, another Akha, took over and renamed the café, but she married a guy from Iceland and left. A-zu – also Akha – took over next, but she married a guy from Germany, and when she left in 2000 my sister and I got our chance ...

Orchid: No ... [smiles] At running the Mei Mei Café ... But it is funny, isn't it? They all married foreigners and left.

GoKunming: Can you tell us about Mei Mei at that time?

Orchid: Well, we were on the roundabout, on Jingde Lu. It was like a box – a real tiny place. But the travelers came because we were the first place in Jinghong to have cheese. Before that, Mei Mei had only had Dai and Chinese food and French fries and coffee. A-chun and I had good contacts in Dali still, and we could source things that other people couldn't in Jinghong. We added pizza to our menu and that made us even more popular, and then we started to bake bread and make cakes and brownies. As we became more popular, we rented the place upstairs and the place next door. 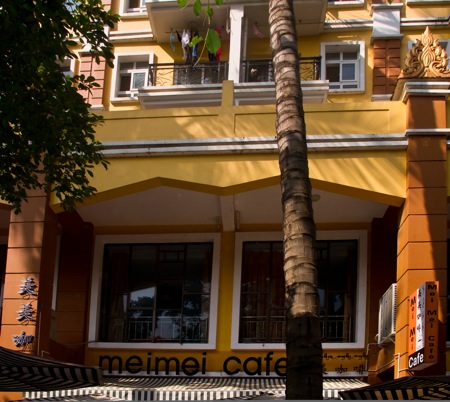 GoKunming: You've moved several times since then ... What happened?

Orchid: In 2006, the Public Security Bureau decided they wanted to expand too, and so we lost the café with very little compensation. I fought for more for a while, and then gave up and went back to where I had started – with another tiny box, this time on Manting Lu. The experience left me a bit scared to invest too much money again.

GoKunming: How did the latest move come about?

Orchid: Business on Manting Lu was OK, but we didn't have many Chinese customers. The problem was mostly the location: the street looked kind of run-down and there was no parking. By 2009, it was clear to me that the backpacker market was not stable enough to run a business, and I needed a place that appealed to the local market too, and so I moved here to Menglong Lu – though not actually this exact location; it was a few doors down. Business was so good that in April I moved here to bigger premises.

GoKunming: Do you ever miss Dali?

Orchid: Jinghong is great, but the summers are too hot and people here are a little too relaxed. I miss the clear blue skies of Dali in the winter sometimes and I like the Dali attitude – the Bai people have more get up and go than people do here in Jinghong. Ideally, I'd like to keep this place [Mei Mei's] but spend more time in Dali.

What is the current address for Mei Mei Cafe?

Miss you Orchid! Hope to see you all soon. Love from Hollywood :)

I lived in Jinghong for 6 months, and in my opinion Mei Mei's food and hospitality beats the other cafes on the same block hands down.

Orchid, and her sister, run a great place. Good food, lots of free advice on where to go and how to get there. Want a tour, need a car, a ticket? See Orchid, she's the tall beautiful lady.

Every winter since 2004 I've headed south to Banna. First stop is Mei Mei's. Just tell the taxi driver "Mei Mei Cafe" and in about 10 minutes you are there.

Now, if they just had T-Shirts

I'm a girl born in banna. But i've study in kunming ...
so i miss my hometown,when i was middle student often i would go there to enjoy the dinner or coffee chat with my friend