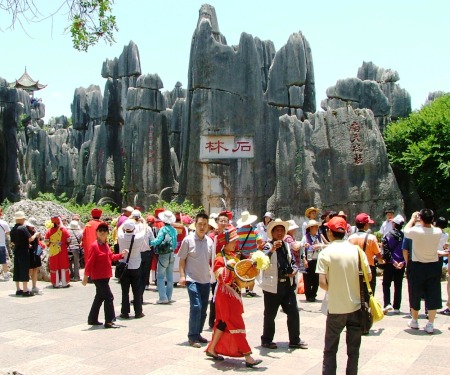 Yunnan may be home to some of China's most spectacular scenery, unparalleled biodiversity and a variety of ethnic minority cultures, but this past National Day holiday it was the least popular travel destination in southwest China.

According to a Dushi Shibao report, Yunnan reported 5.6 million visitors from October 1 through 7, roughly one-fourth of the 21.3 million tourists that passed through Sichuan during the same period. Yunnan was also well behind Chongqing (12.8 million), Guizhou (11.4 million) and Guangxi (8.4 million).

In terms of money spent by travelers around southwest China during the holiday, Yunnan was also dead last, only taking 2.5 billion (US$375 million), with Sichuan (9.1 billion yuan) again in the top spot, followed by Guizhou (4.3 billion yuan), Chongqing (3.7 billion yuan) and Guangxi (3.2 billion yuan).

As for individual cities, Kunming was visited by 1.3 million tourists during the week, much fewer than the 5.6 million that visited Chengdu, but more than the 850,000 that traveled to Guilin.

Why, with its wealth of top travel destinations, is Yunnan so far behind Sichuan in its ability to attract tourists? Duan Qingyuan (段庆元), director of the Kunming Travel Agency Industry Association, said that in recent years, the Sichuan government has adopted a cohesive strategy for developing its tourism industry, which has produced positive results.

Duan said that Yunnan in recent years has taken a hands-off approach to managing its tourism industry, which has resulted in poor operation, ineffective promotion, wasted resources and a general mess.

The Dushi Shibao report said that Yunnan is presently trying to learn from Sichuan.

So ripping off tourists with extremly high entry fees actually does bring results!

Anybody heard about PANDA Card in Chengdu? If not here is the deal:

Any tourist from out of Sichuan can get that card at the touristinfo or the airport and it brings you into some great tourist spots for FREE!
english.sc.gov.cn/news/bignews/200903/t20090326_648967.shtml

Maybe something to learn, instead of hiking the entrace fee into the sky. Shilin is now 175 RMB...INSANE!

The entrance fees are and will be a concern for national tourists though I don't really know if Yunnan's direct competitors are charging similar sky rocketing ticket prices or not. Furthermore Kunming is going to get passed by as a stopover for tourists now that nearly every area worth visiting in Yunnan has an airport and frankly I can't blame tourists for not including Kunming in their plans.

This place might still be a decent place to live and work but honestly, what is there to see around here for a tourist? The Stone Forest it the only one think I can think about but there are karst formations all over Southern China, many of which are nicer and cheaper to visit than the one near Kunming. In 5 years Chinese tourists will fly into Shangri-La, take a bus or train to Lijiang, fly from there to Tengchong, then they'll fly to Jinhong (or whatever Sipsangpanna's main city is called) and from there they'll go back home. Kunming's tourist industry is pretty much fxcked and the hiked up fees all over Yunnan will ensure that no one ever comes back to visit.

Furthermore I think we all have a feeling that not only do we get screwed over when we want to visit the scenic spots but also that the money we have to cough up end up in the wrong pockets, or at least will be spent on anything else than preserving the natural beauty of the blah blah blah that every area claim.

The wealthy domestic tourist is fully capable of mimicking the antics of the so called 'cute' Panda: both find a scenic spot, consume to capacity and beyond, despoil the environment in every conceivable way, role around in their own excrement and then move on. The lunatics running the asylum cater for these needs, pocket the money and snort away to their stye. Everyone is happy.

I'm from the Netherlands and I´m planning on going to Kunming. I hear from a lot of people that Yunnan is one of the most beautiful provinces of China. How the h#$* is it possible that there is a leg of tourism in Yunnan? I can not believe it is only the fees they ask? Maybe there is just a lot more to see in Yunnan, that we don't know of. With the wonderful weather of Kunming they should also have more tourism right? For me Yunnan is unexpectedly low on this rank and with the beauty it has to offer i expect them to get higher in the future.

Many years ago, just after Xi'an was opened to foreigners, I went there to see the Terracotta Warriors. Everyone in that city was hell bent of overcharging, cheating and screwing the tourist. I'll never go back.

Kunming, and Yunnan in general, are salivating at the thought of the hordes of tourists descending into town once the new airport is open. Cleverly, I think, they are raising prices now instead of after the tourist laden jets arrive.

But as the guide books begin to label one venue after another as overpriced and not worth the visit, reality will set in. Too late, the goose will have been killed and eaten in banquet fit for a king.

In Jinghong the Dai people are getting hard to find as pretty Han girls, working for Han businessmen, are the only girls wearing Thai style dress.

We live here so I guess we don't know how much more hotels cost today versus five years ago. I went to an unimpressive restaurant where the food was good but every dish was over 30 kuai for Thai/Dai style.

The recent attempt to increase Chinese language tuition from 4000 to 8000 is symptomatic of the thinking of local officials. There will be so many tourists, foreigner, and visitors they think they can't help but get rich.

In the north, rents were increased 50 to 100 percent. Many businesses left and the number of game arcades and barbershops increased with bored staff sitting out on the sidewalks.

A micro econ class 101 on price elasticity, some price theory, and consumer attitudes and thinking should be mandatory.

Once Yunnan is known for being over priced and not worth wasting holiday time to come here, it will take years to recover.

The bus tours originating in Kunming and going to places like Stone Forest are universally bad and in need of regulation. Spend all day with a guide and stop at half a dozen rip off souvenir stores on the way out and on the way back, eat a crappy lunch somewhere, and only have an hour at the destination.