Undeterred by the failure of a previous attempt to ban unnecessary car horn use downtown, the Kunming government launched a month-long campaign yesterday aimed at reducing horn-honking on the city's streets.

A complete ban on non-emergency horn use by motorized vehicles inside Kunming's second ring road has already been in place for nearly two and a half years with the overwhelming majority of drivers ignoring it or unaware that the ban even exists. 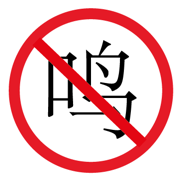 Police appear to be aiming for a middle ground with the new campaign, which will run through the end of this month. Drivers will not be punished for non-emergency horn use, but they are limited to three honks in succession, each no longer than half a second in length.

During the campaign, which is focused on major roads and business areas inside the second ring road, drivers will reportedly be given one warning for violating the horn use restrictions and then handed a fine of between 200 and 500 yuan for subsequent violations.

The revival of Kunming's anti-horn campaign suggests the government is acknowledging that noise pollution emanating from the city's streets has become a significant problem.

"There are a lot of cars on the road during the height of rush hour and traffic jams are a perfectly normal thing," a local woman told the Metropolitan Times newspaper.

"But there are some drivers who just start honking wildly as soon as they see a jam ahead of them, which gets all the other drivers honking, too. In the end the entire street is filled with nothing but the sound of horns."

"Drivers will not be punished for non-emergency horn use, but they are limited to three honks in succession, each no longer than half a second in length."

Reminds me of this classic: en.wikipedia.org/wiki/Holy_Hand_Grenade_of_Antioch

And the Lord spake, saying, "First shalt thou take out the Holy Pin, then shalt thou count to three, no more, no less. Three shall be the number thou shalt count, and the number of the counting shall be three. Four shalt thou not count, neither count thou two, excepting that thou then proceed to three. Five is right out. Once the number three, being the third number, be reached, then lobbest thou thy Holy Hand Grenade of Antioch towards thy foe, who being naughty in My sight, shall snuff it." Amen.

Limiting the use of horn doesn't really solve the problem. drivers won't really understand why they aren't allowed to use the horn and will feel the new regulations are arbitary. they need to be taught that the horn is NOT a substitute for the brake nor is reaction a substitute for anticipation.

Basically they need to learn a totally different way of driving.

@Danmairen: Having experienced India, that's pretty much what I thought...

Not surprisingly, there has been no noticeable decline in horn use in Kunming during this campaign. I haven't seen a single sign urging people to lay off the horn, nor have I seen any police issuing warnings or fines.

If you want to see how beautiful a Chinese city without incessant horn-honking can be, just go to Nanning in Guangxi. Nanning has had a horn ban for five years or so now... when I first went there I noticed something was very different from Kunming. It took a while before I realized it was the lack of noise pollution coming from impatient/rude drivers.

What's Nanning's secret? The police there actually enforce the horn ban and do issue fines to drivers who use their horns for no reason. The beauty of this system is that after a while, everyone in Nanning seems to have gotten used to the idea that they can't honk whenever there's someone in front of them, so there's not even much of a need for enforcement at this point.