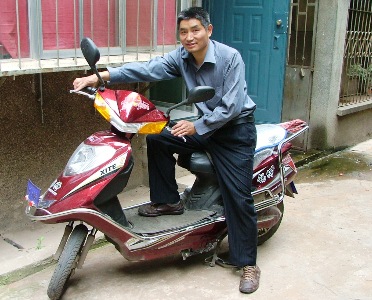 Kunming is an increasingly popular place for foreigners to live, but even with good language skills it can be a challenge to manage certain tasks from home repairs to navigating the local bureaucracy to arranging transportation for the weekend.

For more than a decade, native Qin Benhui (秦本辉) a native of Xuanwei in eastern Yunnan, has been helping many of Kunming's international residents get things done that otherwise would be difficult or impossible for them to do themselves [Disclosure: he replaced our toilet last week].

In addition to helping individuals and families, Qin is also on retainer as a repairman and problem solver at several of the more popular foreign-owned establishments in the Wenlin Jie area.

Simply known throughout the city as 'Xiao Hui', Qin is almost constantly zipping around town on his electric bicycle. He stopped by the GoKunming office earlier today to chat about his unique role in Kunming's international community:

GoKunming: When did you come to Kunming?

Qin Benhui: In 1992. After graduating from middle school I didn't have anything to do in Xuanwei so I moved to Kunming in search of work.

GK: What was your first job in Kunming?

Qin: I worked for the railway bureau, doing all kinds of odd tasks in one of their factories, I did this until 1998. Since then I've been working at the management office at a residential compound near Wenlin Jie.

GK: How did you first start helping foreigners get things done?

Qin: I first started getting to know foreigners around 1998 or 1999. They were living in my compound and would run into every kind of problem imaginable.

GK: What are some of the more common problems you've been asked to fix over the years?

Qin: Lots of foreigners lock themselves out of their apartments. Also, foreigners and Chinese often have different ways of looking at the same situation, which often leads to misunderstandings that need sorting out.

GK: How many foreigners have you helped in Kunming?

Qin: Probably somewhere around 3,000... I've helped people from pretty much every country in the world.

GK: Has all this interaction with foreigners given you particularly good impressions of any countries?

GK: In addition to your repairman and fixer duties, you're also manager of a residential compound off of Dongfeng Xi Lu – do you think KM is generally safe?

GK: What do you think of the current state of the Kunming real estate market? Would you buy an apartment now?

Qin: This isn't a very good time to buy an apartment – prices are too high. Every year property prices are rising quickly. Many homes have been demolished in the last few years, this definitely has something to do with it.

GK: The rate of change in Kunming seems to be constantly accelerating... what hopes do you have for the city's development over the coming years?

Qin: I hope it can become a place that is comfortable for people to live in. The climate here is pleasant, and the people are nice, but the city needs more green space and wastewater management needs to be taken more seriously as a way of improving Dianchi.

GK: If you could be mayor of Kunming for a day, what would you do?

Qin: I'd put a cap on the number of cars the city could have and I'd improve the city's traffic infrastructure – that would be most important. There are too many cars on the streets here, it can drive you crazy.

GK: What is your preferred construction materials market?

Qin: I usually go to the Mingbo Construction Materials Market or the Daguan market, those places usually have the best deals.

GK: If you were abducted by aliens and they only allowed you to eat one dish for the rest of your life, what dish would you choose?

Qin: What kind of question is that? That would never happen.

GK: With China not participating in this year's World Cup, who are you cheering for?

Qin: I'm not interested in football... China's didn't make it this year? Ai yo... I don't like football anyway.

We all need a 'Qin Benhui' at some stage. I need someone to repair the repairs carried out by a rouge 'builder'.

Was your conversation in English? Or did you translate from Chinese?

@ Elizabeth: The interview was done in Chinese.

He saved my life once by the way. Literally