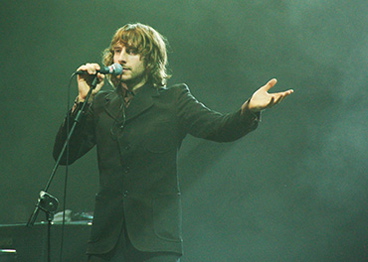 German musician and songwriter Maximilian Hecker has taken what is still a road less traveled for Western musicians touring China – not only visiting the bigger coastal cities but also venturing into the country's interior.

His efforts have paid off – he is well known in China and is passing through the country once again, this time to promote his new album I Am Nothing But Emotion, No Human Being, No Son, Never Again Son. The album has an airy pop feel that could translate well to Chinese audiences.

Hecker will take the stage at Uprock on Saturday, May 1 for his first performance in Kunming. He recently took the time to answer some questions from GoKunming while waiting in an airport for volcanic ash to clear. Here's what he had to say:

GoKunming: You are one of a handful of Western musicians that has established a fan base in China with extensive touring, especially to cities other than Beijing and Shanghai. What made you decide to tour China's interior?

Maximilian Hecker: I come to China to see my fans! The Internet makes it possible to estimate if an extended tour is possible, if enough people are interested in my live shows and if all costs can be covered. So far, I'm lucky to have a lot of Chinese fans! As long as people are willing to spend money for music, musicians will be able to record and travel.

GK: Your music is quite different from most contemporary Chinese music - how do audiences on the mainland tend to react to your performances?

MH: So far the reactions have been very good; very warm and euphoric. It's so great for me to come to China as I feel more accepted with my music there than in Europe, where some people have doubts about if I'm for example being ironic or even if I really mean what I sing. My Chinese fans seem to understand my music intuitively and they accept me the way I am.

GK: What are some of the more memorable experiences you have had touring in China?

MH: Travelling, and especially travelling to China, means a lot to me as the confrontation with a foreign country, foreign people and a foreign culture has always enabled me to perceive my subconscious, has always made MY inner - and before hidden - "foreign" sound. Hence, the discovery of the - from my European point of view – foreign and exotic country China has lead to the discovery of my "inner China", a place inside me that I had not known or perceived before. A place where everything appears as easy, a place of the centre, of being centred, a place without any demons, a place where all my restrictive laws appear to be thrown off with a shrug.

Regarding this, I'll show you three entries from my diary from July 2007, when I did my last China tour:

"Here I have this strange, sacred feeling to be in an oasis, in a bubble, on the moon. In a space that one cannot reach by moving towards it, but only by exclusiveness. Here I am unattainable. Safe. Protected. Independent. Maybe for the first time in my life. I had to leave my home and to travel to the other side of the world to finally find myself."

"Glance into my soul. Here starts: the sleepwalking, the decomposition, the depth, the wonderful isolation, the lightness, the closeness to my soul, the shining darkness, the raising of ambivalent experience, the release from the parents, and here starts this decomposed, beautiful city's grey, eternally resting desperation."

"What follows the awakening is an endlessly deep, desperate and blissful moment. As deep in my own soul as now - waking up in the opposite of my hometown, jetlagged, after many, many hours of flight, in the air condition's decomposition smell - I have never been before. I'm infinitely far away from all that is tangible, from all reality, from all doubtful achievements of being grown up and of the clear reason. I'm like a scared roe deer, an abandoned child, a mite in the universe, lonely and lost in the deepest darkness. Like an infant, lying in the black of the uterus in his helpless decomposition. And still: this utterly isolated loneliness is the most beautiful feeling that exists. I have my own death cradle me in his cold hands and I am overjoyed. And my heart races. It is not able to comprehend. Where I am. What I am doing here. Aren't I anything else but a helpless, small, deserted and sad child?"

GK: As a musician, have you absorbed any influences from your touring in China and elsewhere in East Asia?

MH: I got a lot of inspiration for songs from my Asian tours as I adore Asian women, but at the same time they drive me crazy as I have no clue whatsoever how to deal with them and under what mystical circumstances they might wanna go out with me. They seem to be unattainable, and so I can only live my adoration for them in a virtual way.

GK: What inspired you to call your new album "I Am Nothing But Emotion, No Human Being, No Son, Never Again Son"?

MH: The title of the album derives from the stream-of-consciousness poem "Blue Soldier Night", which is the first track of the album. During the described night I had the impression to place myself outside of the civil society, which is represented by my parents.

The factors that underlied the poem – the "mundane" Berlin nightlife, alcohol, lack of sleep and the intimate encounter with a very unbourgeois living artist – all that meant to me some kind of rebellion against civil and inhibiting structures and lead to a dissolving of my ego structure. I was flooded with intense emotions – which for me is a special experience, since it is quite hard for me to perceive emotions in my everyday life – emotions of bliss but at the same time fear of death.

Freed from my super ego, I was able to have a glimpse into my soul. I had the impression to be freed of my body ("no human being") and to be "nothing but emotion". Also, by uniting with this woman, I had accomplished an initiation rite which freed me from my status as the "son of my parents", respectively, by uniting with this woman – representing the opposite of my mother – I had performed some kind of "mother exorcism".

GK: Is there anything you're planning on doing here in Kunming aside from performing?

MH: I have never been to Kunming. I hope I will have some time to see something of the city besides arrival, hotel check-in, soundcheck, concert and signing session.

GK: With the industrywide decline in album sales, live performances are a crucial way for musicians to support themselves - do you think Asia or parts of Asia will be able to rival Europe and the US as a touring destination for Western musicians?

Maximilian Hecker will play Uprock on Saturday, May 1. Music starts at 8pm, entry is 100 yuan in advance or 200 yuan at the door.

"Here I have this strange, sacred feeling to be in an oasis, in a bubble, on the moon. In a space that one cannot reach by moving towards it, but only by exclusiveness. Here I am unattainable. Safe. Protected. Independent. Maybe for the first time in my life. I had to leave my home and to travel to the other side of the world to finally find myself."

"I Am Nothing But Emotion, No Human Being, No Son, Never Again Son."

"What I am doing here. Aren't I anything else but a helpless, small, deserted and sad child?"

"I'm like a scared roe deer, an abandoned child, a mite in the universe,"

He sounds like a real hoot. Hope the music can lift the cheesy lyrics.

I thought I had a few little problems that needed attention in my life, but after reading this...I am not the one with any problems! This is really some GOOD bullshit!

"My Chinese fans seem to understand my music intuitively".

Seems that you are counting on a pretty high level of intuition yourself to think that your Chinese fans are going to even "intuitively"understand YOU!

"I adore Asian women." "They seem to be unattainable, and so I can only live my adoration for them in a virtual way."

Wow, deep, wonder what a virtual orgasm is like? And what makes Asian women more attainable or unattainable than women from any other place in the world? Come on!

This is the biggest load of crap. Oh, I am sure you have "found yourself" but it seems there are a few screws still on the ground. "...the release from the parents." I bet your folks could sure do with the break.

"...here starts this decomposed, beautiful city's grey, eternally resting desperation." AND "...Like an infant, lying in the black of the uterus in his helpless decomposition." AND "...by uniting with this woman – representing the opposite of my mother – I had performed some kind of "mother exorcism."

I just had to include these examples of what this guy said in his interview for all the readers. Now I ask you: Are you going to pay 100 or 200 Yuan to see this guy Saturday night?

I knew as I read this that the guy would be torn apart in the comments, and I think that is right.

This guy's a douche.

this guy has some sense of humor... he he

This German mother-exorcist is extremely successful in invading the underground live bars all over China. His events are regularly sold out way ahead. And a 100 or 200 RMB entrance fee isn't cheap. Obviously he does something right, and hits the main nerve of young Chinese teenagers with lyrics and music that can't be describe other than extremely cheesy. In fact so cheesy that one could even suspect a very well-hidden cynic behind his forced emo-mask (American psycho anyone?).

Hey Max do us a favor and skip the underground places on the mainland, get a deal with China mobile and play in the big culture palaces, that's the appropriate location. But more likely we will see more of his offspring.