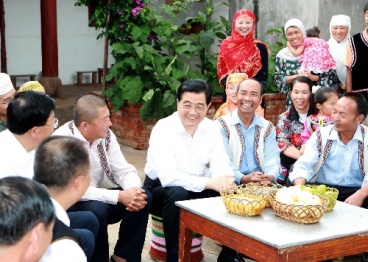 Chinese President Hu Jintao wrapped up a four-day inspection tour of Yunnan on Tuesday in which ethnic unity and government concern for the development of western China were the primary messages, according to a Xinhua report.

President Hu's inspection tour, which was not covered in Chinese media until its conclusion yesterday, took him through Kunming, Chuxiong and Yao'an, the site of a 6.0 magnitude earthquake that injured hundreds and destroyed tens of thousands of homes earlier this month.

While in Kunming's Shuncheng neighborhood, Hu stressed the importance of ethnic unity to a group of minorities, urging them to "Improve the precious and hard-earned overall good ethnic unity in China and to make the flower of ethnic unity bloom even more brightly and beautifully."

While in Yao'an, Hu inspected rubble from this month's earthquake and met with local officials and homeless locals, offering words of encouragement and support.

"We are definitely able to cross this difficult junction and rebuild a beautiful home," Hu said.

While making the rounds in Yunnan, Hu also sent a personal greeting to US President Barack Obama during this week's China-US strategic and economic dialogue. During the talks, China and the US agreed to resume military ties, which had been suspended in fallout from riots in Tibet last year, and it was announced that Obama would visit China before the end of this year.

"While in Yao'an, Hu inspected rubble from this month's earthquake. Hu agreed that it was in fact rubble thereby ending a week long standoff between rubble supporters and rubble deniers in the area."

I miss the old Shuncheng area, as muttony as it was... I had Xinjiang food there for the first time years ago.

Shuncheng and the old Bird and Flower Market are two of the areas that should have been protected rather than 'developed'.