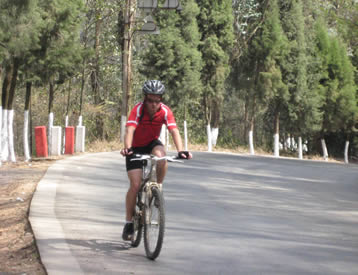 Kunming is a starting point for countless world-class cycling trip options, both in the immediate area and around mountainous Yunnan province. If one resident of the city has his way, it may also soon be the birthplace of the world's first web community-owned professional cycling team.

One and a half years ago Marc Frencken left his hometown of Weert, the Netherlands to come study Chinese in Kunming. During his free time, Frencken has been exploring Yunnan on his bicycle. In addition to being an avid cyclist, Frencken has also long had a voracious appetite for televised cycling events such as the Tour de France.

Earlier this year Frencken launched his current project – CrowdRiders – a drive aimed at organizing 40,000 cycling fans around the world to serve as owners and managers of what – if successful – will be the world's first crowd-sourced professional cycling team.

Frencken said he was inspired by the success of the website myfootballclub.co.uk in organizing more than 32,000 football fans from 80 countries to contribute at least 35 pounds sterling toward the purchase of Ebbsfleet United football club for 600,000 pounds in February 2008. Three months after being bought by its 32,000 owners, the club won the FA Trophy at Wembley Stadium, the greatest achievement in the club's 120-year history.

"Cycling is a much more achievable crowd-sourced sport," Frencken told GoKunming, "A cycling team's annual budget is much less than that of a football team."

The current mission of the CrowdRiders project is to collect the names and email addresses of cycling fans around the world who would be willing to pay a 55 euro yearly membership fee once 40,000 people have committed to the project.

The resulting 2.2 million euros would make up more than half of the 4 million euro budget Frencken envisions for the CrowdRiders professional cycling team, making the 'crowd' the majority shareholder in the team and giving it the power to vote on all the team's major decisions, such as which cyclists it will sponsor, which races it will participate in, who the team's sports director will be – even the team's jersey design.

The remaining 1.8 million euros are to come from shirt, equipment and website sponsors, who Frencken feels confident CrowdRiders will be able to attract once reaching critical mass. 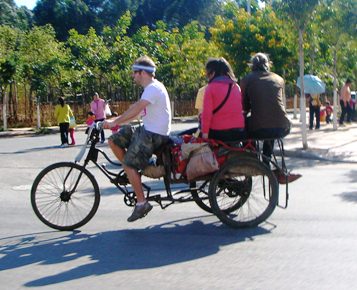 "I'm convinced that once we have an organized group of 40,000 cycling fans from around the world it will be easy to attract sponsors," Frencken said, "Ideally the sponsors will be involved in open-source or crowd-sourced business models."

At present, CrowdRiders has collected 142 'aspiring CrowdRiders' – prospective members who tentatively agree to pay membership dues once the target of 40,000 members has been achieved. As CrowdRider number one, Frencken has already set an ambitious target for the CrowdRider team – to enter one of the three wild card slots in the Tour de France.

CrowdRiders currently has members in China, the UK, the US, the Netherlands, Brazil, Norway, Australia, Canada, Spain and several other countries, Frencken said, but the project's main development challenge is getting its website translated into several key languages.

At this point, the site is only in English and Dutch, but Italian, French and Spanish versions will be needed to attract cycling fans from the traditional cycling powerhouse countries, Frencken said. In addition to these languages, Chinese is also a priority language, as China is not only where the CrowdRiders concept was born, but it is also a large internet-savvy country that has only recently taken interest in professional cycling, he said.

Let me be the first to offer a very sincere "Yawn" and a good luck with the project. I don't mind cycling per se but after having experienced traffic in China I would much rather donate to research into human teleportation so we can avoid spending time dodging cars and sidestepping scooters in the deadly chaos known as the Kunming streets. Can you imagine what it will be like in 5-10 years with their plans to make this a 10 million city without building a subway?

Yea Danmairen, too many people... have you thought of leaving and giving that space you occupy to others who appreciate this city and the ideas within for what they are? Deadly chaos...hehehe you must be from the US, right?

You do realize you are actually trying to defend the (of all things) traffic in this fine city? what exactly are "the ideas within"? anyway,, not really looking for a fight. I was just pissed off coz I nearly got flattened yet again today while using a zebra crossing at green light. And don't get me wrong,, I like this place but that shouldn't disqualify me from occasionally being annoyed with potentially life threatening situations. It almost felt like a "You are not Chinese so you don't have the right to say anything"-moment for a second there. :-)

There are actually plans for a subway/light railway in Kunming but I suspect that will materialise around the same time as Danmairen steps out of his teleporter.

In any case, Danmairen, your original comment was completely off topic. Here we have an article whose main topic is a Kunming resident's attempts to organize a professional cycling team. Cycling races happen on controlled courses and are not subject to normal traffic conditions, so how is this related to the bad traffic/bad manners of motorists and cyclists in Kunming?

It's like there was an article about the proper way to pet a dog, and here comes Danmairen saying, "I don't mind dogs per se, but I really hate eating spinach."

Also, @Yawningforsleep my I believe Danmairen is Danish; apparently not ALL people who complain excessively are American.

I don't usually complain excessively,, I think I even made a 10 Great things about Kunming post somewhere. I agree though,, I was off topic. This site could use a little debate on the other hand so I don't mind playing the devil's advocate. Dan,, how did you know that I hate spinach? spooky.

I'd love to cycle around Yunnan/Kunming, but the roads are so congested with traffic. As a drive and a rider I know from experience that cars and bicycle don't mix. If there were only some nice country road out of Kunming without too much traffic.

It sounds like a great idea. Kunming has always been the center for training Chinese professional cyclists, and I'm constantly running into large groups of local hobbyists when I'm riding around the surrounding mountains.

The one thing I'd wonder about is how manageable such a large management structure would be. Sounds a bit like herding cats. Marc should keep a close eye on how the management works at that football club.
As for traffic, it does blow, but it gets a lot better once you're out of the city and up on the mountains.

I can't resist pointing out, Dan, that your ten great things about Kunming post was buried deep inside your ten things I hate about Kunming/China thread.