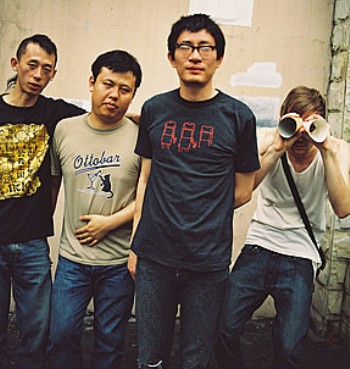 Just before the recent national holiday, Kunming got its second look at one of the bands at the forefront of China's modern rock scene when P.K.14 played Speakeasy Bar as part of its current national tour. The band was well received by a modest weeknight crowd that seemed to generally enjoy the show and demanded an encore at the end.

After finishing up their sound check, Beijing-based P.K.14 - listed as one of the five Asian bands to watch in 2008 by Time Magazine – joined GoKunming for some across-the-bridge rice noodles and a chat about how things have changed since the band last played Kunming in 2004.

Since then, vocalist Yang Haisong (杨海崧) and drummer Jonathan Leijonhufvud (雷坛坛) have been joined by guitarist Xu Bo (许波) and bassist Shi Xudong (施旭东, also of Guai Li, Subs and previously Brain Failure) and are now on their own label, Maybe Mars Records (兵马司).

Yang and an American friend founded Maybe Mars Records a year ago in Beijing with the goal of being self-reliant and more focused on innovative sounds based on its own aesthetics.

"I think we need a self-reliant system which can fully support the new music and more concentrated as well," said Yang. The label is now home to notable Beijing bands such as Carsick Cars and Joyside. The band is currently touring in support of its new album City Weather Sailing (城市天气航行) on Maybe Mars – it had previously released two albums on Beijing label Modern Sky Records.

The new album returns with the band's combination of thrashing chords, dark bass lines, post-punk beats and neurotic vocals, yet with more string melodies and a darker feel. Yang explained it was inspired by the theme of death. "I was feeling blue because of a friend's death, and didn't realize the music had become so gloomy and full of despair till we had made it," Yang said.

When asked about the process of music making, he added, "We usually compose the music together and I write the lyrics either later or before. It is quite spontaneous. We just express our emotions and thoughts during the composition without defining exactly what these things are. The message is left for various interpretations."

Bassist Shi said that the band prefers to think of itself as a rock band rather than be pigeonholed in trendy subgenres such as post-punk or new wave. Shi emphasized the band's diverse musical tastes. It may not be surprising that the band claims Fugazi and Joy Division as musical influences, but they also draw inspiration from Bob Dylan and 1960s British Mods. Yang said he is also influenced by 20th Century American writers and French existentialists.

According to Yang, who is also the band's songwriter, the name P.K.14 evolved out of the original name Public Kingdom for Teens as it was easier for audiences to remember.

Samples from P.K.14's album City Weather Sailing can be listened to on the band's MySpace page.