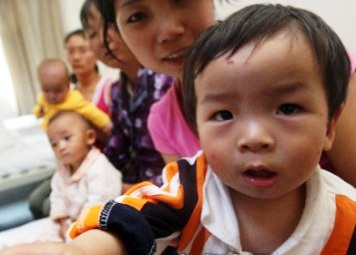 Local media is reporting that at least 14 infants in Kunming have developed kidney stones due to consumption of San Lu Milk Powder which has been recently found to contain the toxic substance melamine, which is used in tanning and the production of plastic and pesticides.

Three infants have died and more than 6,000 have fallen ill nationwide this month because of melamine-tainted milk powder, in a scandal that has led to a recall of 69 infant formula products produced by 22 different companies as well as considerable public outrage.

Melamine, which can make protein levels in foods appear higher than they actually are, has also been found in a yogurt bar made by Inner Mongolia Yili Industrial Group.

The discovery of melamine in the yogurt bars has increased concerns that melamine may be present in many more dairy products around China.

Suffering from PR fallout that echoes the massive recall of pet food produced in China which had been found to contain melamine, the central government has ordered "comprehensive nationwide tests for melamine on every dairy product by every producer", according to a China Daily report.

Sadly, this is not the first incident in which toxic infant formula has killed Chinese babies. Several babies in Anhui province died from consuming fake milk powder in 2004.