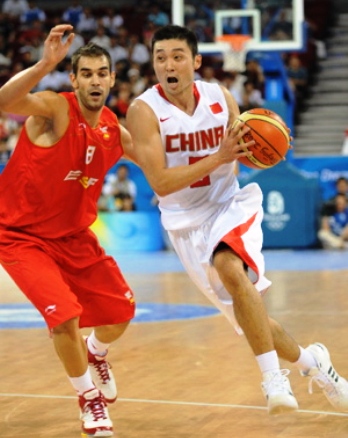 China's 59-55 win over Germany last night puts the team into the quarterfinals of the Olympic tournament. With very little hope of medaling, securing a spot in the final eight was the goal the team had set for itself.

With wins over Germany and Angola and losses to Spain and the United States, China is tied for third with Greece, which lost to and beat the same teams as China. Even if Germany were to win its final game against the United States, and China lost to Greece, the two would still be in a tie, and China's victory in head-to-head competition would put them in the quarterfinals.

Yao Ming has been setting the pace, as expected, averaging just under 20 points per game. The team's next leading scorers are Liu Wei (刘炜), with 10.3, and Zhu Fangyu (朱芳雨), with 9.5 (CST would like to point out that we told you how important these two players—little known to fans outside of China—are to the team, in this post last week). Both players have gotten most of their points from long distance: Liu has knocked down 8 threes and Zhu, 10.

Yao's NBA colleague, Yi Jianlian, is averaging just 8 points a game but has been a strong defensive presence for China. Sun Yue (孙悦), who will join the NBA's Los Angeles Lakers for the 2008-2009 season, has also had a quiet performance offensively, averaging 6.5 points, but has come up with key steals and blocked shots.

China will play its last preliminary game Monday against Greece. The quarterfinals begin on Wednesday.