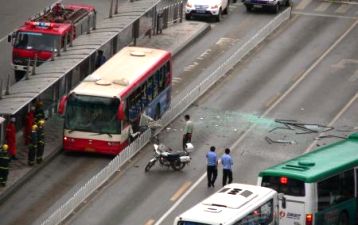 Today at approximately 7:05 am a bus running the number 54 route exploded at the Panjiawan bus stop on Renmin Xi Lu, killing one and injuring ten, according to initial Kunming media reports.

Approximately one hour later at 8:05, another bus exploded at the intersection of Renmin Xi Lu and Changyuan Lu, reportedly killing one passenger and injuring four.

As of 11:30 am, no official announcements regarding the explosions have been made by the Kunming police or municipal government.

According to reports, eyewitnesses at the Panjiawan incident described an extremely loud explosion and all the windows of the bus shattering, covering the street with glass.

A special task force comprised of provincial and municipal officials has been organized and dispatched to the scenes of the explosions and an investigation is underway.

A BBS on local internet portal clzg.cn has posted some photos of scenes from after the Panjiawan explosion.

Update: Reuters is reporting a third explosion in the vicinity of Minshan, and both Reuters and Al-Jazeera seem to be suggesting a possible connection between today's blasts and a violent clash between farmers and police at a rubber plant in southern Yunnan's Menglian (孟连) on Saturday in which two farmers were killed and 54 people – including 41 police – were injured.

Video of the Panjiawan blast's wreckage has been posted by the website ChinaNews.com.

Shanghai Daily is reporting that the Kunming municipal government will hold a press conference about the blasts this afternoon, citing a CCTV report. 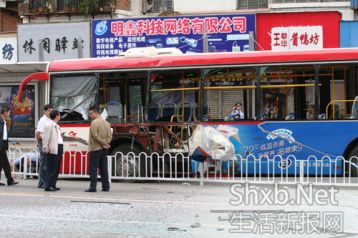 Update 2: Chinese news site ccvic.com is reporting a third fatality from the original two blasts. According to the report, the third victim died while on the way to the hospital. The above image comes from the same report.

Update 3: Sources at Kunming Wujiaba International Airport have told GoKunming that at least one flight has been delayed due to weather-related reasons, despite no apparent inclement weather.

Out here on the west side of town where the second explosion occurred, the roads are still all cordoned off by the police. I could only get about 200 meters close to the site of the second explosion at Chang Yuan Lu. The authorities had already towed the damaged bus away by 11 a.m.

I heard about 3 explosions. Roads around western bus station blocked.

only found some general information in German on yahoo.de
de.news.yahoo.com/[...]

can we get the chinese name of the streets so we could locate them on google map? a mash-up showing the location of the explosions would be great...

STAGED terror just like 9/11, Madrid and London. All an excuse for the pseudo-commie fags to get even more fascist. No??? Really? why would a legit freedom fighter target a bus and not a pig... I mean police station? or government building?

I guess one explosion was here:

the buildings match, given the explosion was at the bus stop west of the corner on Renmin Xi Lu and the photo was taken from place southwest of it

the other might have been at htis corner, but not sure about ist:

I guess that it's an interesting exercise (Googling the maps) but are people really expecting to view a recording from one of the many video cameras in the area?
I should like to learn more about the two farmers killed, and 41 injured police, in Menglian on Saturday, which is becoming an even wider problem.
Finally, is anyone surprised by all this?

When frustration eventually erupts after so long being suppressed, it seems it often does it without any rationality. The people who were killed or injured did not deserve it. The perpetrators should not have done it, but nor should they have been driven to it.

I hope that those who are the cause of the frustrations that resulted in this tragedy will reflect and consider addressing the causes rather than just clamping down even harder.

Thx Markus, here is the link to a collaborative google map. everyone can edit it, would be great to publish it on gokunming with more info on it:

(be careful, satellite view does not match the chinese map)

I've added another placemark, Menglian county, because some have suggested a connection between the bombings and the unrest there last week.
Note, that the placemark is only to show, where Menglian Mengma town is, I have no knowledge on the address of the rubber company in question 多次找橡胶公司 or the exact location of the clash, if anybody could refine this I would be very grateful

Thanks Markus, I didn't check where it was yet and it's valuable information!