China's largest solar power station to be built in Shilin 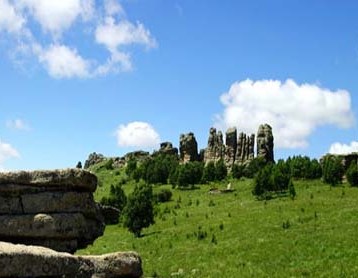 The small city of Shilin (石林), located about 70 kilometers southeast of Kunming, is primarily known for being home to the Stone Forest, part of a UNESCO World Heritage site and one of China's most famous examples of Karst landscape. In addition to rapidly building up its tourism infrastructure, the city is also preparing to become a leader in China's alternative energy revolution.

Last week Yunnan Power Investment New Energy Development Company announced that it will be the main investor in a Shilin-based solar energy photovoltaic power station which will be China's largest upon completion. Total initial investment in the station is expected to reach 3.7 billion (US$536 million).

The solar energy base will feature an installed generation capacity of 66 megawatts and will cover an area of 173 hectares. It will be connected to the provincial power grid for consumption by Yunnan residents and businesses. Construction on the facility will begin in October of this year and is projected to be completed in 2009.

Yunnan's high altitude, bright sun and clear skies make it one of the ideal locations for solar power facilities, which are being promoted by China's central government.

In October 2007 the government of Dali prefecture announced that it would cooperate with Yuanchang High Technology Group to build a US$500 million solar base, the largest non-crystal silicon thin-film solar cell power project in Asia.

In June 2007, Kunming was named China's 'Solar City' by the Worldwatch Institute - mainly based upon the prevalence of solar-powered water heaters throughout the city. It is estimated that half of the city's population uses solar water heaters.

Yunnan Normal University in Kunming is also home to the Solar Energy Research Instititute, which was founded in 1971 and plays an important role in China's solar technology research and development.

January 17, 2022 "I am currently looking for a job as English teacher in Kunming, I have experience in kindergarten teaching. Wechat : xavialmo …"
Living in Kunming Geezer