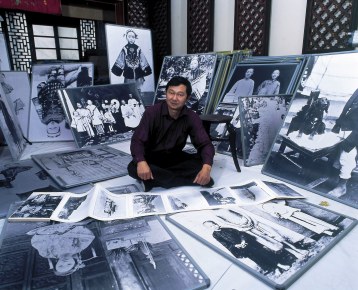 Like most other Chinese cities, Kunming has been racing toward abstract ideas such as 'modernity' and 'development' via extensive demolition of the remaining older parts of the city to make way for gleaming high-rises filled with offices, apartments and retail space. First-time visitors to Kunming, be they Chinese or foreign, have to put a real effort into finding the few older parts of the city that are still around.

Until 1952, Kunming was a walled city – the wall and its gates are long gone, but their existence still echoes today in place names like Xiao Ximen (小西门, 'Lesser west gate') and Beimen Jie (北门街, 'North gate Street'). There are also less obvious connections to the wall, such as Qingnian Lu (青年路, 'Youth Road'), which was once Kunming's east wall.

The city government in 1952 ordered hundreds of young people to tear down the wall and use its bricks to make a new road running north-south. To show its appreciation for the young people that demolished the east wall, the city government named the new street after them. With the wall out of the way, Kunming began marching toward a future in which for several decades development trumped culture heritage.

History is one of the primary contributors to any city's character, with older physical structures offering the most palpable connection to the past. In 2008, almost all of pre-1949 Kunming has been razed to clear a path for modernity. On some levels this could be considered true progress as many of Kunming's older buildings were built of earth and lacked simple amenities such as plumbing. That said, some may argue that wholesale demolition of a city comes at a psychological cost.

"I feel that many Chinese people have no faith," Kunming native and private photo collector Yin Xiaojun (殷晓俊) told GoKunming. Yin has spent the last 10 years researching a collection of photos by Auguste François (1857-1935), who served as French consul in south China between 1896 and 1904, during which he spent several years in Kunming and elsewhere in Yunnan working on obtaining a concession from the local government to build the rail line from Vietnam to Kunming, which was then known as Yunnan-fu (云南府).

Over the last ten years, Yin has researched his entire collection of François' photographs, comparing them to documents from the Yunnan provincial government's archives as well as translations of François' memoirs. In order to make the photos more useful in a historical context, he has spent the last decade ascertaining the subject, location, social background and photographer.

After acquiring 1,241 François photographs and motion pictures via purchase and exchanges with French cultural organizations, Yin held his first exhibition of 360 photos from the collection in Kunming in 1997 at the Yunnan Provincial Museum. More than 250,000 people bought tickets to take a look at Kunming at the start of the 20th Century, setting an attendance record for a single exhibition at the museum that still stands today.

Subsequently Yin was invited by 44 mainland cities to bring his collection to their top museums – he chose four: Beijing, Xi'an, Zhengzhou and Chengdu. In 1999 he ceased exhibiting the photographs because he felt a need to find out as much as he could about each shot's story.

Fast-forwarding to today, Yin says he has completed his research and is preparing several projects related to the François photo archives. In October of last year, he traveled to the locations of all the François photos to document the current conditions of the places François shot more than a century ago. His travels took him to Singapore, Hong Kong, Guangdong, Guangxi, Yunnan, Sichuan and Shanghai. He is planning on using the then-and-now photos in a new book he began writing this year.

Yin said he would also like to organize a new exhibition of François' photos highlighting the massive change in China over the last century. His end game, however, is to build a museum that displays the collection permanently.

GoKunming thanks Yin Xiaojun for providing a sample of photos from the François archives to share with our readers. Over the coming months we will publish 25 photos and their stories every Wednesday. We hope that the photos will help bridge the gap between Kunming's distant past and its dynamic present.

Contact Yin Xiaojun: His ten years of researching the François photos behind him, Yin Xiaojun is open to discussing possible cooperation with individuals and organizations interested in the collection. Yin can be contacted at yinxiaoj(at)public.km.yn.cn.

I would like to contact Yin Xiaojun however the indicated mail address seems outdated.Do you have any update or useful information ?
Thanks for prompt reply.
Best regards,

I would love to see the photos. Is there an exhibition or displayed in a museum? Or could someone give me his current email address?
Thanks alot

Theres a thick exellent book out there on Auguste Francois photos. It can be found in the Provincial Museum for sale, and among other historical shelves around.

At times Xin Xiaojun gives examples of those photos to exhibitons. One exhibition was last month at the Yunnan Library. Google him every now and then to make a hit.

BTW: Auguste Francois also took video footage. He got the camera from Lumiere Brothers who had just invented it. He brought it all the way to Kunming (Yunnanfu), and its among first footage from Asia/China. Now how about that. Well, its not easy to find the video footage from Yunnanfu dating from around 1900, and why is that, one may ask...

About 200 of Auguste Francois' photos, all representing present-day Honghe Prefecture (红河州), are currently on display in the Chaoyang Gate (朝阳楼) in Jianshui (建水). Admission is 20 yuan. The images are blown up and high quality. It's a terrific collection and a must-see if you go to Jianshui.

Hey all, I'm curious if any Francois photos are on exhibition in Kunming right now?

Not a full exhibition of them as the subject to my knowledge but there often a few scattered throughout other museum galleries. Your best bet is online and books, I have a few if you want to come check them out. Also I have a collection of rarer old photographs, if anyone has any I will buy.

Voltaire probably knows delcampe and such.

I got a huge collection of old Yunnan photographs, but you will need a lot of money :)

I pm you when im next time around Yunnan, that will be several months from now. No business needed, a glass of pastis is fine.

I find delcampe-type sites too collector-focused: very expensive, individual shipping overheads, and often not unique stock. I try to find things elsewhere, which is not too hard because I am basically a klepto: my interests are very broad :) Definitely keen to see your collection Peter.

I am completing a book on China's Covered Bridges and have found one one image by Auguste François of a bridge in Guizhou. Do you know of others for Yunnan? Thank you. I have visited most of the existing covered bridges in Yunnan, but am looking for old photographs as well. Here is information about mewww.amazon.com/Ronald-G.-Knapp/e/B001HD2YE4