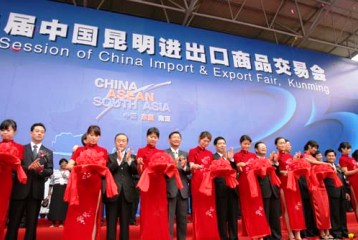 The Kunming Fair is a regional trade fair jointly sponsored by the governments of Sichuan, Yunnan, Guizhou, Guangxi, Tibet, Chongqing and Chengdu. Last year's Kunming Fair saw 162 companies exhibit their products and more than US$158.5 million in completed deals over five days. The total reported value of contracts and agreements signed at the event exceeded 68.1 billion yuan (US$8.9 billion).

According to Kunming media reports, this year China's Ministry of Commerce will participate in hosting the fair for the first time with the stated goal of increasing the scale and quality of the fair.

Yunnan Commerce Bureau Director Sun Xiaohong (孙小虹) said this year the fair will feature 2,318 exhibits, adding that 2,148 exhibitors were already confirmed for the event. Sun said that exhibits by Burmese and Sichuanese enterprises will be slightly fewer in number than last year due to the recent Myanmar cyclone and Wenchuan earthquake, respectively.

A preview of some of the products on offer can be found on the fair's official website. The website also features other information of less obvious value, including 'Britney Spears loses custody of children', 'Goal-driven achievers less prone to Alzheimers' and 'Abdul says she's straight up ready for a baby'.