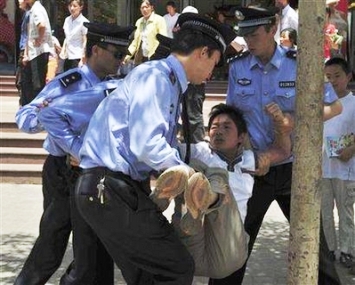 Police carry away a Carrefour protestor on Sunday

Over the last several days, Carrefour locations throughout Kunming have been dealing with something different than the usual crowded aisles and long checkout lines. The French retailer has been targeted by protestors in Kunming and other major cities around China for allegedly supporting Tibetan independence, an allegation which the company's headquarters vehemently denies.

Carrefour, which has 122 stores throughout China, was also subjected to protests in Beijing, Qingdao, Wuhan, Xi'an and Hefei over the weekend. The protests are partly a result of Chinese anger regarding the protests that dogged the Paris leg of the Olympic torch relay - particularly when a pro-Tibet protestor tried to wrestle the torch from the hands of fencer Jin Jing (金晶), who has one leg and uses a wheelchair.

Chinese citizens are also upset with French President Nicolas Sarkozy, who has been contemplating boycotting the opening ceremony of the Beijing Olympics on August 8 this summer in protest for China's handling of last month's riots in Lhasa. Both the torch incident and Sarkozy's public boycott musings have been cited by Chinese netizens as reasons for boycotting French goods and companies – with Carrefour at the top of the list.

Ironically, some of the anger directed at Carrefour is connected to statements by Jack Cafferty, a commentator on US-based television network CNN. Cafferty created a new wave of anger among Chinese netizens when he referred to China as "goons and thugs", a statement that led to a showdown between China's Foreign Ministry and CNN, who apologized for Cafferty's remarks, saying he was only referring to the Chinese government. Spokeswoman Jiang Yu of the Foreign Ministry rejected CNN's explanation/apology for Cafferty's remark.

The small group of anti-boycott protestors jokingly calling for an end to the protests, saying they were tired of being bombarded with calls to boycott France. The group bore signs saying "Establish a harmonious society, oppose the boycott" and "Build a harmonious environment – welcome the 2008 Olympics".

According to a Xinhua report, a man surnamed Zhu was leaving the Nanping Jie Carrefour on Thursday when he was accused by a group of protestors as being a "sellout to his country" (卖国贼), an accusation to which he responded "What are you doing boycotting Carrefour? More than half the stuff they sell is made in China!"

"hit with a bottle of mineral water"

I see that the mob in China is doing nothing to disprove the CNN commentator's statement about the Chinese. Behaving like mindless goons and thugs is exactly the reason the

West has such a negative view of China, the Chinese "government" and the Chinese people. It's interesting that the "students" who have been protesting in the US take the freedom of speech for granted, but wouldn't ever be able to express themselves in their own "perfect" country.

When Chinese people have a peaceful protest, you call them "mobs". When Westerns do the same thing, what do you call them? Democracy fighter?

Xin : the demonstrators in France and UK did not burned a chinese flag nor heckles chinese tourists.
Those game are already fu cked up and it's some chinese fault.
Those demnostration prove that they are not mature enough to hoist the games.