Media coverage of China's preparation for the 2008 Olympic Games has focused almost entirely on the host city of Beijing. It's understandable: That is where the Bird's Nest and the Water Cube are, where the huge crowds will show up in August, where decisions are being made now about what athletes will eat and how venues will be kept safe. 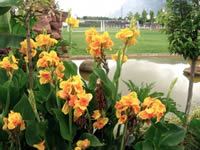 Flowers and Football at Hongta

Kunming has been playing a major, if much quieter, role in China's preparation for the games. The elevation of 1,900 meters, year-round temperate climate and significantly cleaner air than Beijing make Kunming an ideal place for sports training - in fact, the city has been China's national high-elevation training base for more than 30 years.

Kunming's two major training complexes - Hongta Sports Center and Haigeng Training Base - have been a beehive of sports activity, and should only get busier as the Olympics draw near.

"We will be very busy between now and the Olympics," said Zhang Tianyou, general director at Haigeng National Training Center in Kunming.

We went out to Haigeng recently to have a look around. The trip gave us a glance at an important but little-known place in China's sports world, and resulted in a precious opportunity get on the pitch with the women's football team.

Haigeng is the official national training center and with its boxy cement buildings and iron-barred windows, the 35-year-old complex looks the part of an old Communist sports factory. The sprawling campus includes eight hardwood basketball courts, weight rooms, indoor and outdoor tennis courts, a dozen football pitches, two running tracks, a pool for swimming and one for diving. It also has a large snooker hall, a room for table tennis and a volleyball gym. Tucked away in one corner, Haigeng even has a pair of disused baseball diamonds, a rare sight in China.

Haigeng's setting on Dianchi Lake, past Kunming's award-winning Lakeview Golf Club and an abundance of spiffy new condominium developments, is quiet and clear-skied, and relatively isolated. As professional tennis player Yanina Wickmayer said after playing in a match at Haigeng in November, the location can be both good and bad for athletes.

"The facilities are nice, but it's out here in the middle of nowhere," Wickmayer said. "But that could be good if you're trying to really focus on your training for a little while."

Athletes, coaches and team managers stay onsite in the complex's many dormitories and hotel rooms.

If Haigeng calls to mind the China of 20 years ago, Hongta Sports Center is a gleaming US$58 million monument to China's future hopes. Just 10 minutes' drive from Haigeng, Hongta was built in 2000 by the Hongta cigarette company, a major economic driver for Yunnan province. While Haigeng is used almost exclusively by professional athletes, Hongta doubles as a sports club for the general public. The general public can use all of its extensive facilities and every weekend, it hosts amateur football matches. 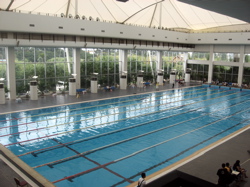 Aside from about 10 football pitches, including one surrounded by a running track, Hongta also has a 50-meter swimming pool with a water slide (which seems to always be out of commission), a badminton gymnasium, tennis courts and a basketball court. It also has one of China's few ice hockey rinks, and a workout room with treadmills and weightlifting machines. Athletes can unwind between workouts in a large game room full of air hockey and pool tables, or in the basement bowling alley. Hongta also has a 101-room hotel and restaurant.