Lion and tiger display stirs concerns of another Kunming mauling 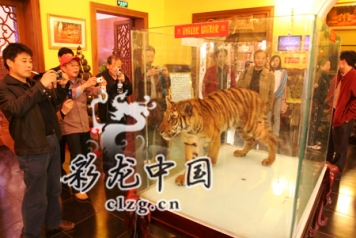 In a promotional move that would seem to be tempting fate, Kunming Arts Theatre (艺术剧院) is currently displaying a live tiger and lion in its front lobby, according to a report in Kunming daily Dushi Shibao.

Considering that last year in Kunming a six year-old girl was mauled to death and a four year-old boy sustained serious head injuries in separate tiger attacks, it is surprising that the cats being displayed in the Arts Theatre are in open-top glass cages which are low enough for the tigers inside to reach their paws out of their containers.

The cats, which are only separated from freedom by a 1.4 meter-high glass barrier, have attracted large numbers of visitors, according to the Dushi Shibao report. Their glass containers feature signs warning in Chinese: "Please do not get too close – you will be held responsible for any dangerous aftermath" (请勿靠近老虎！危险后果自负).

The Dushi Shibao report went on to list six attacks on people by lions and tigers last year across China in the cities of Changde, Nanjing, Ji'nan, Dongguan – and Kunming, the only city with more than one recorded attack.

On January 14 of last year, a five year-old tiger named Lili who was in heat reportedly lost control during a performance at the Yunnan Wild Animal Zoo and pinned a four year-old boy to the ground, inflicting serious but nonlethal lacerations upon the boy's head.

Five weeks later at the Kunming Zoo on Yuantong Jie, a six year-old girl whose parents were taking her photograph with a tiger – inside the tiger's cage – was bitten on the head by the tiger when her parents' camera flashed. The tiger held the girl's head in its jaws for a full minute before letting go. The girl was pronounced dead at the scene, her parents were later given compensation of 340,000 yuan for their daughter's death.

When will people the people reponsible realise that treating animals in this way is ignorant and should not be part of a modern 21st century society. I would also include the teasing of the big cats with food at the Wildlife Park as equally unacceptable.