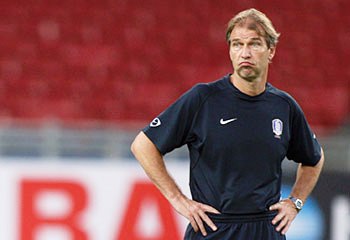 China's World Cup qualifier match against Australia is little more than two weeks away, but Australia coach Pim Verbeek has already fired the opening salvos in what come gametime is likely to be a fiercely contested match.

Saturday's Sydney Morning Herald quoted Verbeek – who was in Chongqing to witness China's losses to South Korea and Japan in the East Asian Championships last week – as saying the China Football Association's decision to host the Australia match in Kunming has made his team more determined to win. At an elevation of 1,900 meters (6,233 feet) above sea level, Kunming's altitude is expected to present a challenge to the Australian team.

Pressure on China to win their upcoming match in Kunming is high after they played to a draw in their World Cup qualifier against Iraq.

Australia's confidence is high after beating Qatar – the fourth country in what has been dubbed as the qualifying round's "group of death". Defeating China would make it very likely that Australia would make it into the World Cup for its third time ever.

"Probably we will have [the] better players, so the only way to beat us is to make it as difficult as possible - and that's why they play in Kunming and not in Beijing or Shanghai," the Sydney Morning Herald quoted Verbeek as saying.

"They're not stupid. On purpose they play at 1900 meters, on purpose they ask us to travel longer than normal ... that's why we play in a place nobody has heard of. But on the other hand, I think that is a mistake, because our players are very willing to show it doesn't matter at all. At this moment, I go for three points. I don't go for a draw. After the game, we may have to be honest and say this is the best result we can get. But now the players want to show we have the better team, so we go there to win."

After losing in Chongqing to East Asian rivals South Korea and Japan, the pressure on China to beat Australia is high – a win would keep its hopes of going to the 2010 World Cup in South Africa afloat, but a loss would make it highly unlikely that China would qualify.

"China is one of those countries where the fans definitely expect their team to win," Verbeek said. "And they have to win, because after the draw against Iraq, they have to beat us. They have a lot of new players in the team. They have had a very long preparation, and during that preparation, the coach sent out five or six players because he was not happy with them.

"At the East Asian Championship, the results were not good, but I thought they were not bad. I was not concerned with results, I was looking for quality and weakness in the team, and I still think they will be dangerous. But they have the pressure. They will have 50,000 people making unbelievable noise, and that is good for us."

There will also be some cash at stake for host team China when they play Australia at Tuodong Stadium on the 26th.The China Football Association has pledged to give eight million yuan to China's national team should it qualify for the upcoming World Cup. Additionally, the team will receive 500,000 yuan for each victory over a nation ranked in the world top 50 and 300,000 yuan for defeating lesser-ranked teams.

ACTUALLY it would be our third time :P

Bob, going to suss out away seats at the stadium today.

Thanks Sharnie, the error has been corrected.

Aussie fan tickets can be purchased near Gate 7 of Tuodong Stadium. 444RMB for seats in the away section (bays 1 and 2). Tickets must be purchased by Tuesday 25th of March. The only tickets available on matchday will be from scalpers.