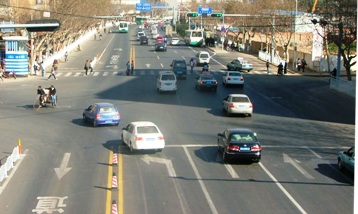 Xuefu Lu smoother than before... for how long?

After weeks of construction the new, two major streets in Kunming have been converted into one-way streets for all motorized vehicles except buses, part of a campaign by the municipal government to address a worsening traffic situation that is increasingly affecting the city.

As of New Year's Day, the major east-west roads Xuefu Lu (学府路) and Yieryi Dajie (一二一大街) have been turned into complementary one-way streets. Xuefu Lu now runs from west to east and Yieryi Dajie from east to west. Public buses have been given a bidirectional lane on both roads to encourage more use of the city's public transportation system.

Kunming traffic police have printed and distributed 50,000 flyers announcing the major change for these two major traffic arteries. Initial reports have been generally positive, but police have voiced concern that the changes to the road have made traffic move much faster than before. This combined with the tendency of many pedestrians to cross the road away from intersections or during red lights is a source of concern that the number of accidents involving vehicles hitting pedestrians could increase. 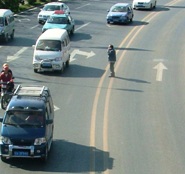 According to the Yunnan Daily, there have been many drivers that have been using the bus lane illegally, typically after traffic police have finished their work days. The days leading up to January 10 will focus on educating drivers regarding the changes, but from the 10th onward, drivers on either street who speed or violate the new rules will have their license plates photographed by the newly installed hidden cameras (电子眼) with punishment issued afterward.

it's damn annoying trying to get back to the top end of xuefu lu from town after the change.

now i have to go up the crowded 121 dajie right up to kunsha lu, way further than necessary, and through many more lights, before doubling back up hongshan bei lu.

therefore, for me at least, the changes are bad bad bad!

With 300 new cars being added to the roads of Kunming daily, this will only be a temporary solution. In the long term, improvements in public transportation (like we have seen in Bangkok with their new subway system and tramway system) would do much more to improve the traffic situation in Kunming. High taxes on the people buying cars (and polluting the environment/contributing to global warming) and catalytic converters to halt the pollution coming from automobiles might also be a solution for keeping the city of Kunming clean and green in the near future. Then it might even be a good idea to market the city as the cleanest and greenest in China. Just because China is a developing country doesn't mean that they can't develop "Smart."

An interesting read. I first came to Kunming in mid-2009 and by then the changes were already made. I actually live just off xue fu lu and everytime I'm in a car or taxi (except late at night) we have to go the long way round starting on yi er yi, passing by hongshan bei lu and finally onto xue fu lu. In the reverse direction it's a straight route direct to yi er yi that takes all of 5-6 minutes outside or rush hour; in the original direction going back home it takes about double that. Good for taxi drivers (they get more money!), good for bus patronage but a little annoying for the average commuter affected by this everyday. Anyway, nothing wrong with it, it's just the way it is now - i never realized it used to be different before!