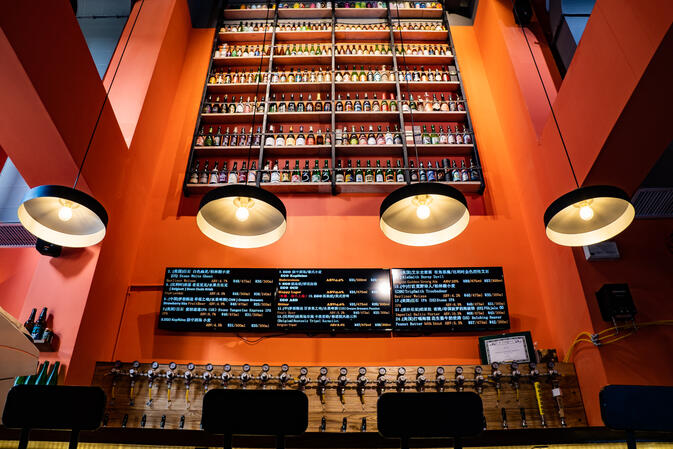 Bar with a view

Editor's note: This article is a sponsored post. If you would like to find out more about GoKunming promotional articles, please get in touch via the GoKunming Contact Form.

Beer lovers rejoice! The craft beer and brewpub trend that is sweeping the world is also happening in Yunnan. The movement — especially here in Kunming — prompted us to introduce Best Brewery as a new category in the latest edition of the Best of Kunming Awards. The inaugural award was won by Humdinger Brewpub, with Paulaner Brauhaus as runner-up.

Now there is a new kid on the block in the Yunnan craft brewery scene. EGO Brewery is a draught house, bar, restaurant and collective of friends all rolled into one. I talked with Hai and Vee, two of the founders, to find out what EGO is about and how they decided on the name. 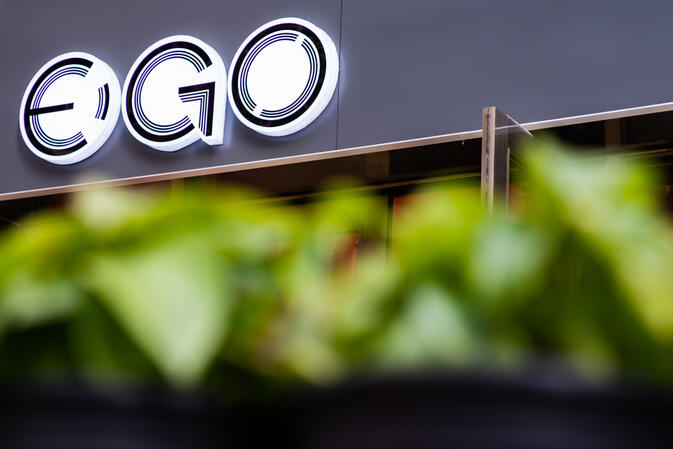 Hai starts by explaining a bit about the short history of Yunnan craft breweries. China's taste for beer has long been dominated by weak but affordable internationals lagers such as Tsingtao and the more local Dali beer. Beer Bug was one of the first Kunming craft breweries to introduce stronger, more imaginative beers with complex tastes, but all in all it's a relatively new phenomenon. Soon after, Shangri-la Highland Craft Brewery launched its Tibetan take with local ingredients and Tibetan-inspired label design. Yun Brewing soon followed, with an integrative approach of the holy trinity of beer, food and music, as did Humdinger.

For his part, EGO's Hai once lived in Australia, but returned to Kunming in 2015, bringing with him a wish to introduce the Chinese people to international beer culture. While we talk, he emphasizes that the breweries are not just competing, but also collaborating, in order to develop and promote Yunnan craft beers together.

I ask what EGO Brewery wants to bring to the fledgeling craft beer scene in Yunnan. Hai tells me a bit more about the collective that founded the brewery. They are a group of long-time friends from Qujing (曲靖) with very different backgrounds and who all studied in different places, both in China and abroad. Hai now works as a chemical engineer, while Vee is a psychologist. The one thing they have in common is that they have been friends since childhood and are self-confessed beer geeks. The whole collective at EGO have open minds and an eagerness to do research and experiment. 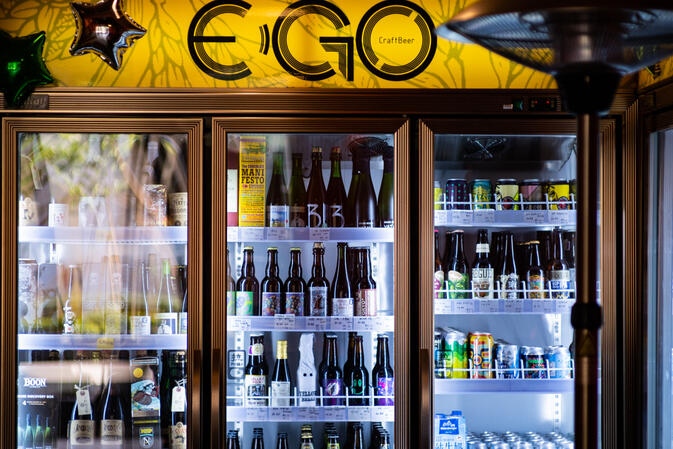 Developing their own beers involved lots of beer drinking — in order to cultivate their own unique tastes — and learning more fully about the brewing process. They have been trying out interesting Yunnan-Western fusions, both in the realms of food and beer. Hai was previously responsible for the Western-oriented food menu at Yun Brewery — which has a steady international clientele — and continues to develop his international culinary skills further at EGO. 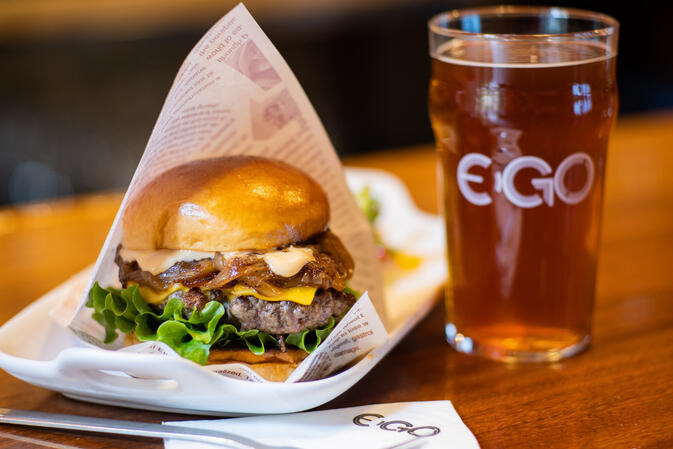 A beer and a burger, a combination made in heaven

Hai likes the challenge of bringing craft beers to local audiences that are not yet fully accustomed to the concept of fancy beers with a heftier price tag. For a long time in Yunnan, there was not much innovation, but now there are a lot more ideas, new energy and more money swirling around, he says.

The younger generations — especially urban youth — are open to new things and want to soak it all up like a sponge. It is still a risky business because craft beer is relatively expensive. However, Hai is convinced people will appreciate quality. Since they brew their own beer on the premises, the cost is lower than imported craft beer and comes with the added bonus of having a unique local character.

EGO has invested in high-quality equipment, including a fiendishly complicated US tap system from Micromatic that can be precisely tuned to pour the perfect beer for each different style of brew. Hai and his friends keep circling back to the topic of wanting to provide the best possible craft beer experience, matched with great food. 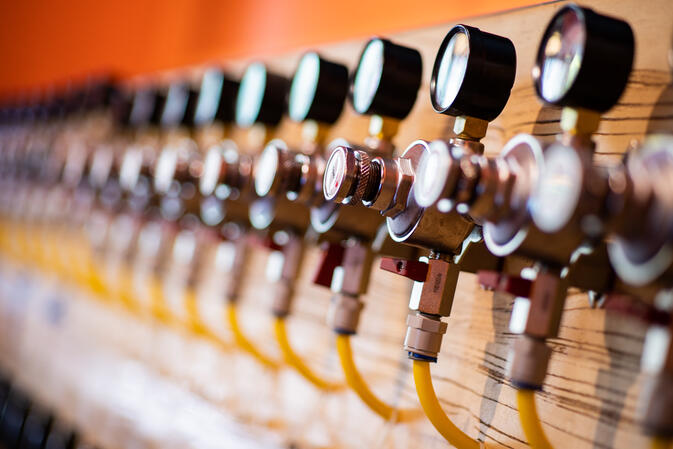 There is no I in EGO

EGO brewery was founded by a group of friends, so everything is decided as a collective. That makes me wonder where the name 'EGO' comes from. Coincidentally they are based outside the Me Town Shopping Center, but the location is not what inspired their name choice, Vee explains. While studying at university, she was fascinated by the Freudian concepts of id, ego and superego. These three represent the range from our most primitive and instinctual motives to our higher moral conscience, with the ego functioning as the mediator between those two strongly opposed drives, she explains. As it is for its founders, EGO Brewery represents wholeness, balance and consensus. 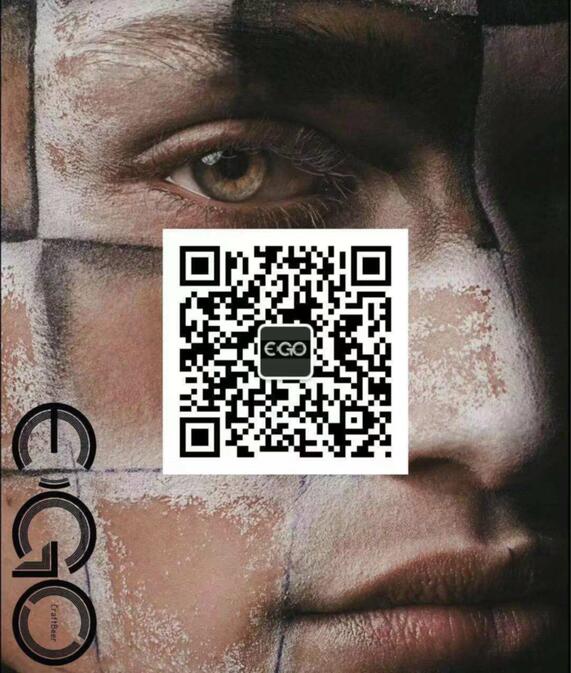 They embrace the idea that a broad range of human behaviors is perfectly normal and have named their beers after common psychological terms such as Obsessive Compulsive Disorder and ASD (Autism Spectrum Disorder). They've done this in order to make the public aware of such issues and help people try and live more happy and fulfilled lives.

Hai half-jokingly suggests that drinking beer might even solve some psychological issues. On a more serious note, EGO organized a fundraiser on April 2 — World Autism Day — to raise funds for the Autism Rehabilitation Facility here in Kunming. All the proceeds from their event went to this institution. Call it beer consciousness. This idea of natural well-being — while enjoying a quality beer and a chat with good friends, mind you — is at the heart of the EGO concept.

I ask them what's in store for the future. They tell me they want to actively build a community of beer lovers, for instance by organizing beer brewing workshops and developing other related activities. They hint at some interesting secret Yunnan ingredients they want to put in their new beers which I am not allowed to write about just yet. I suggest you go there and find out for yourself; they have new beers on tap every few days. 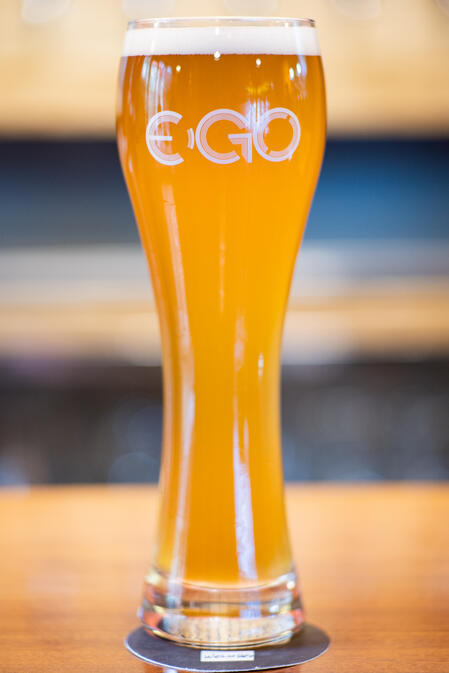 Not a bad article and it's clearly marked as sponsored, presumably by EGO, but I hope gokunming will not put a lot of promotional/advertisement articles in their 'articles' section, where one would hope to find some outsider-produced objectivity in reviews.
Then, of course, there are the links to the Chinese press, but I think we all know where they come from.

Nice place to enjoy a glass of beer!