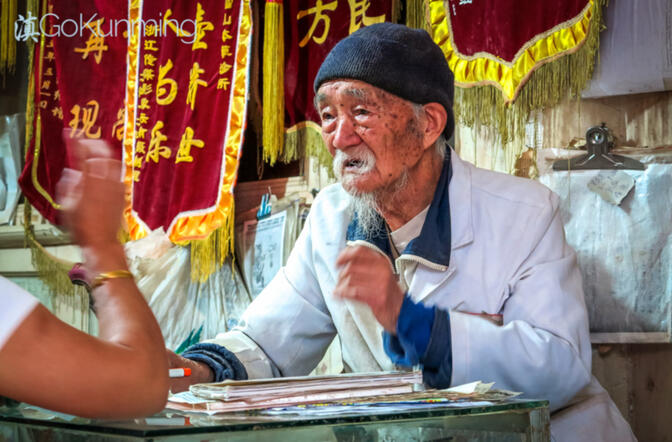 Many in Yunnan cultural circles have been in mourning for the past two weeks. He Shixiu — known to foreigners simply as Dr Ho — passed away in his hometown of Baishi on August 31, at the ripe old age of 97. The good doctor rose to both local and international fame as a prominent and innovative practitioner of Traditional Chinese Medicine.

Doctor Ho first came to the attention of Western audiences in 1986 when he was featured in a New York Times travel article penned by author Bruce Chatwin. Yunnan province's Lijiang Prefecture was, at that time, virtually unknown to the outside world, as were people of the Naxi ethnic minority, of which He Shixiu was one. In Dr Ho, Chatwin found a cultural archetype and muse.

Already 65 years-old at the time of the interview, Dr Ho seemed to many NYT readers as something approaching the embodiment of a modern-day Chinese sage — ensconced atop a far-flung mountain dispensing wisdom at his leisure. In many respects, this persona stuck with Dr Ho for the rest of his life.

He Shixiu was born in the tiny town of Baisha (白沙古镇) in 1921. During his childhood, the region gained international notoriety through a series of National Geographic articles written by botanist and explorer Joseph Rock in the 1930s. As he grew from a boy into a young man, He and Rock maintained contact, with the latter often teaching his precocious pupil the finer points of English grammar when time allowed.

With the founding of New China in 1949, Rock departed the country permanently, while his one-time student matriculated at Nanjing University. He first studied engineering, but at some point during his college career switched to the foreign language department.

While in Nanjing, the future Dr Ho was first exposed to English-language textbooks concerning Western medicine. Thus began his infatuation with all things medicine, a passion he would devote himself to for the rest of his life. However, along the way, He's journey was sidetracked by the Cultural Revolution.

His level of education and familiarity with Western concepts meant He Shixiu's burgeoning career as a university instructor in Lijiang (丽江) was cut short. He was ordered to receive re-education through labor — a euphemism especially prevalent during the 1960s and 70s for toil in penal colonies for those labeled 'rightists' or 'counterrevolutionaries'.

Eventually, He returned to his hometown of Baisha, just ten kilometers north of the Lijiang university where he once taught. Quietly but earnestly, He Shixiu continued his self-education in medicine. He studied plants and their uses in Traditional Chinese Medicine, but also began incorporating Western thinking alongside ancient Naxi minority practices.

By the time Chatwin the journalist showed up in Baisha, Mr He had become a doctor. From the point of his NYT interview until his death, Dr Ho was visited by countless locals and curious tourists. As he aged into his 70s, 80s and then 90s — and Lijiang's reputation as a tourist paradise grew — Dr Ho was profiled by the BBC, CCTV and scores of other foreign and domestic media outlets. Upon his death, according to the South China Morning Post, the scientific periodical Yunnan TCM released a quick homage to Dr Ho. It reads, in part:

He Shixiu had high medical standards and exquisite medical skills. He was known locally as the Good Doctor of the Snow Mountain. Proficient in foreign languages, he made a unique contribution to the promotion of Chinese medicine. His death is a major loss. Here, on behalf of the institute, we would like to express our deep condolences to He Shixiu's family.

Too bad. I wanted to go meet this guy.

What a pity. I was wondering if he is still alive.

Had the chance to meet Him several times. He always said the most important thing for health - and life in general - was happiness.

That reminds me of the one about the French ambassador's wife.

Japan's "Tears Teacher" would disagree with Dr. Ho.
The "namida sensei" lectures across the country to encourage crying for stress relief and better mental health.