By Anna Novikova in Features on February 2, 2018 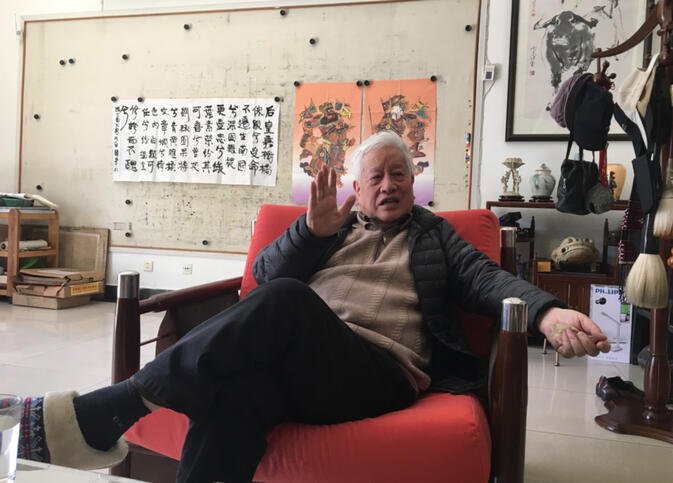 In the world of today's Yunnan art scene, the career of Yao Zhonghua (姚钟华) stands apart in many ways. He has held exhibitions around the globe and a collection of his work resides in China's National Art Museum. Born in Kunming in 1939, Yao studied in Beijing in the 1960s and then spent most of his 50-year career portraying uniquely inspired paintings of his home province's thriving ethnic minority communities. If you are looking to understand the "Yunnan school" of oil paintings, look no further than Yao Zhonghua.

At 79 years old, he serves as honorary president of the Yunnan Oil Painting Society and is a member of the Yunnan Provincial Institute of Culture and Historical Research. Not content to rest on his laurels, Yao has reinvented himself as an illustrator. We had the pleasure of sitting down with Yao, whose recently completed works are on display now at the IWE Art Museum until February 12. 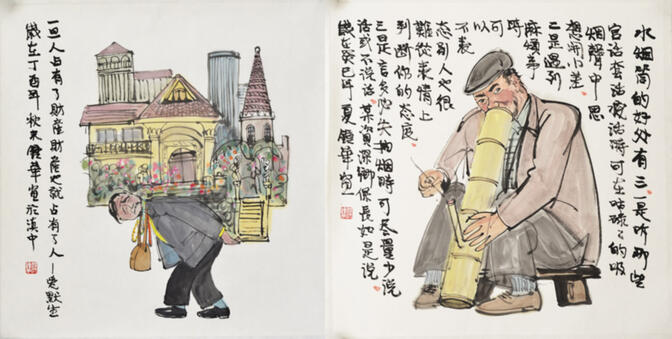 GK: Lately you've been focused on creating comic-style works, yet you're best known as an oil painter. Does this represent a newfound sense of freedom?

Yao Zhonghua: Life is a constant search and constant transformation. But I guess for me, right now, the comics represent an extension of my fading fame and wealth [laughs]. I just draw what I want now and don't focus on success or failure anymore. I'm emphasizing simplicity these days — doing what I want and trying to do it well.

GK: Almost all of your illustrative and oil works center on ethnic minorities. Did you focus on this subject intentionally over the years?

Yao: We live in a place with so many ethnicities. A long time ago, when I was studying, I didn't paint minorities, because at that time I was around northern fishermen. But I draw and sketch minorities because I see them in the villages of Yunnan. It's just organic. Every summer now, I go to rural villages to draw scenery and people. My main current theme is, to frame it narrowly, "farming".

GK: You have been a part of the Yunnan art scene for decades. How do you feel about the current state of oil painting here?

Yao: There is progress. But to me it seems local artists lack direction. In art some think you can do whatever you want. Foreigners say doing the same old things doesn't have meaning, but does mean art overseas is particularly vigorous? Since the nineteenth century, the Western art tradition has valued constantly breaking with tradition. Heritage, history and development can be contradictory, so sometimes that makes people here in Yunnan, and elsewhere, lose focus.

GK: Let's talk about the state of comics, both yours and others that you appreciate from around the world...

Yao: Comics, in my mind, are the accessible form of art for the public. They are much like opinion pieces in prose writing — very direct. Being a cartoonist is one of the most sensitive and risky professions in the world right now. A few years ago, the attack on the magazine Charlie Hebdo is an extreme example. But I maintain that comics and satirical cartoons are also a style that best reflects an artist's wisdom and sense of humor.

Now there are nearly no comics being drawn in China. It's all anime. My works are closer to paintings in a sea of anime. I try and stress poetic and calligraphic traditions, making mine different from other comics by the emphasis on painting aesthetics. My themes mainly come from my feelings and observations towards today's social life. It's what I hear on the streets, what I read, even from what I see on my cell phone and on WeChat. 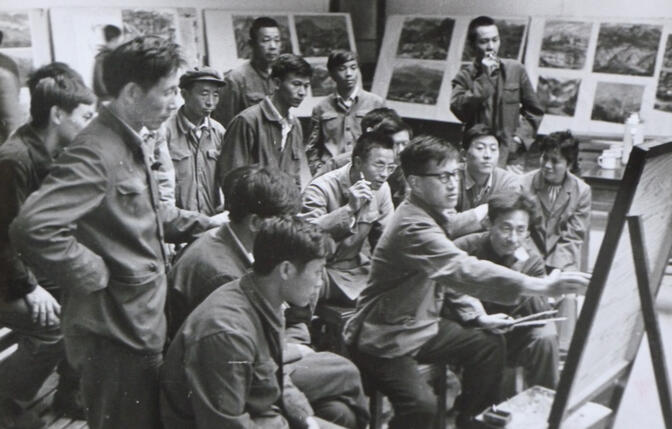 GK: Many say you've been part of the Chinese art 'system' for many decades, and yet you seem largely uninfluenced or limited by it. How do you respond?

Yao: The 'system' is a very blurry concept. I am an artist who worked at a state art institute for a long time. There is no big difference between a professor who teaches in public schools for a salary and a creative artist. [The famous historian and academic] Chen Yinke once said, "freedom in thought, independence in spirit". Being an artist, you have to have your own independent opinion to be creative. You have to own your personal values with self-confidence and conviction.

GK: On that note, what is success for you?

Yao: Success is different things for different people. For some, it's selling paintings and making a good living. Of course, some people who don't have any professional training achieve this type of success. Some people who are successful in business can be successful in art too, and there are artists who succeeded financially. Also, there are some who succeeded in art, but not financially — like Van Gogh. He was an amazing artist, but very poor. Do we call that success? I believe that the biggest success for an artist is when his works enter someone's soul and become a memory that reflects a specific time in history.

An artist has two kinds of limitations — one kind is political, another financial. Financial success can limit you greatly. For example, you paint only one theme and it becomes recognized, and you cannot change anymore. This is a huge limit on the freedom of creativity. So success can also be a double-edged sword. The best artists are the ones who lead with new ideas. 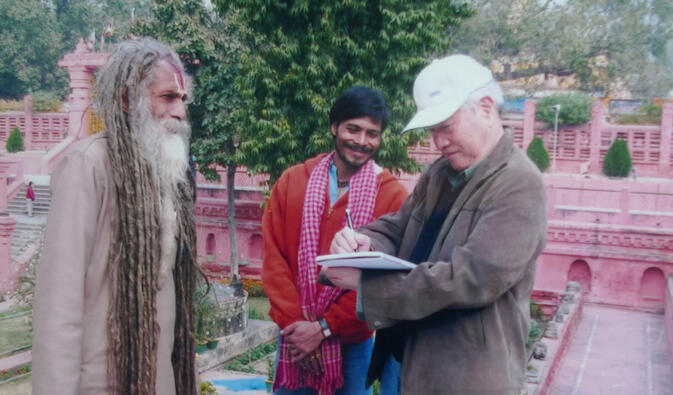 GK: No matter the medium — oil paint or comics — what influences you?

Yao: It's hard to say. There really is no constant. Painting is my main interest and my occupation. From a professional perspective, it doesn't matter if it's Asian or Western culture. I've collected a lot of things, and they all contain an amount of influence — from old African wooden sculptures to things I found in American flea markets.

One of my major interests is of course Chinese traditional culture. But another is foreign tradition. Both are equally human things. We shouldn't think of tradition in terms of one country or another, but instead as parts of a common heritage. I lived in the US for three years, and my intention was to understand cultural development there after World War Two.

Modern art has also influenced me, both positive and negative. Some of it I don't like. For example, conceptual art — I don't like cruel things. It is all a form of human wealth. Art is a common thing, it expresses the common values of mankind, and many of them are linked. It's difficult to communicate influence through a language sometimes, but you can do it through music and art. 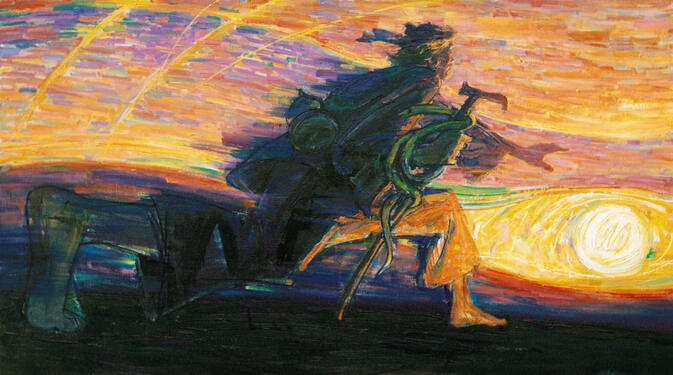 GK: Your studio here is filled with books. Literature must also be an influence...

Yao: I believe there are two kinds of people — those who read a lot and become like storage boxes, and those who read so deeply that good books are lived through and become part of their own experiences. Books have the ability to bring a deeper understanding of reality and of self. If a book simply shows you the nature of things, it doesn't have much meaning. It makes a book just a book, you just you. Reality just reality. Literature is most important when it makes you realize things about yourself, gives you new experiences, teaches lessons about human nature and relationships.

GK: What to you is personal and spiritual freedom? Is it embracing the idea that not seeing in black and white, not being binary, is the way forward?

That is a very difficult question. All people are free to an extent, but even that isn't an absolute. There are social constraints, and considerations of progress and being successful. I used to think sketching wasn't that artistic, but only after I got started and pushed myself into it, I realized the depth. It's a process. And like that simple process, people tend to have different views throughout their lives. It is the same with me. I cared about being successful when I was young. But now, I feel like the work itself is already enough. 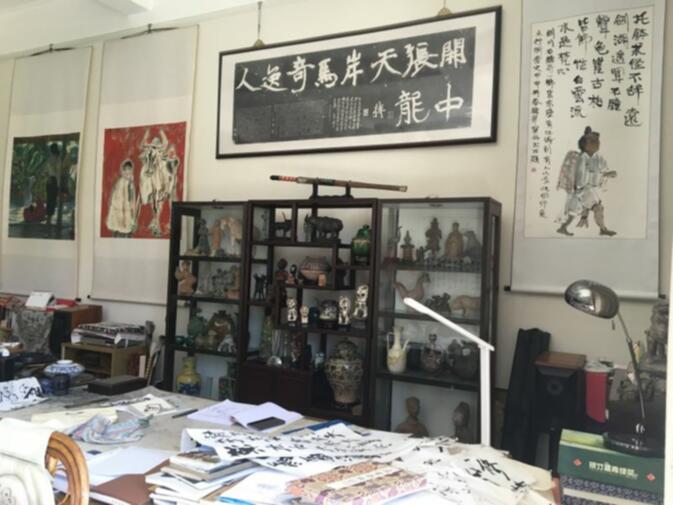