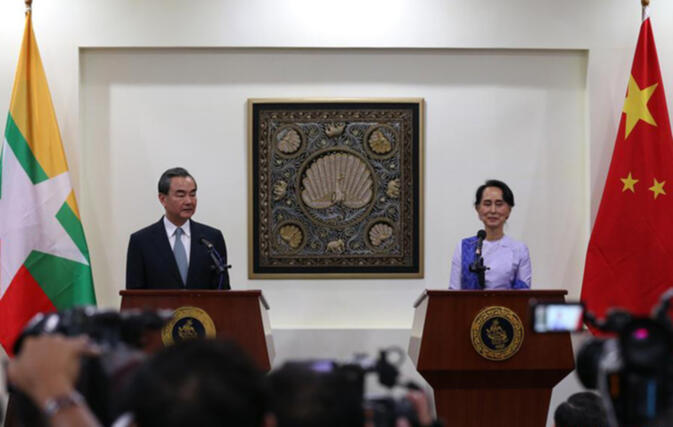 China's top diplomat, Foreign Minister Wang Yi, traveled to Myanmar over the weekend to push for expanded trade and energy development agreements. Such Chinese interests largely concern Yunnan province, but they were almost immediately shelved as the continuing Rohingya crisis dominated the conversation.

Wang's first discussions with Aung San Suu Kyi on November 19 were regarding the Myitsone Dam. The proposed hydroelectric facility has been stalled for more than six years due to a number of environmental and conservation concerns. Those sticking points have clouded relations between the two countries for nearly six years, at times seeming to anger some Chinese bureaucrats.

A week before Wang's trip, a spokesman for China's Foreign Ministry said tersely, "The Myitsone hydropower station is a commercial cooperation project both sides have already agreed upon, and [it] has already been through a complete approval process." For the government of Myanmar, the picture is less straightforward, and what once seemed like a good idea now appears much less so.

In fact, on November 9, Myanmar's Minister of Construction, Win Khaing, told reporters the dam is no longer a primary concern. "Sometimes things change. Now China is overflowing with energy, they don't need power right now. What was very, very important ten years ago has different perspectives right now," he said.

Instead of belaboring the point during his visit, Foreign Minister Wang suggested a new tack by proposing a huge trade corridor. He explained China was interested in creating an overland shipping route that would connect Kunming to the Burmese cities of Yangon and Mandalay as well as the deep-water port of Kyaukpyu.

Wang characterized the idea as a "giant three-pillar cooperative" strategy, that would stimulate Myanmar's economy, update its infrastructure and boost regional interconnectivity. For China, such a corridor would most likely entail huge roadbuilding efforts, development loans and a chance to increase exports to its western neighbor.

For decades China has exercised serious economic influence over Myanmar, but that sway has diminished recently. Other countries — most notably Japan and Singapore — are beginning to move into the country with deals and investments that appear less one-sided than past Chinese offerings. Bilateral trade between China and Myanmar has already totaled US$5 billion this year, but Beijing is obviously hoping for more. Whether or not Myanmar is in a mood to reciprocate on the corridor at a time when its government is standing firm on the Myitsone Dam is not clear. 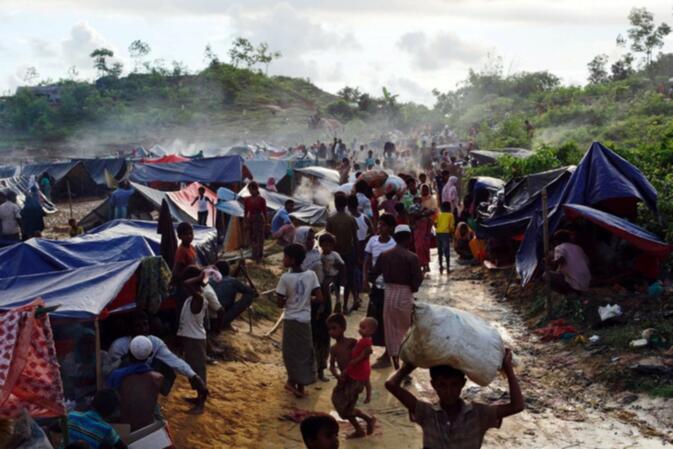 However, the elephant in the room could not be ignored. Of much larger importance than dams and trade is how to resolve the situation surrounding Myanmar's Rohingya people. Wang had just come from Bangladesh, where at least 600,000 Rohingya now live in makeshift camps after fleeing violence in the Myanmar's Rakhine State.

The Chinese minister was quickly asked to shift gears away from investment policies and focus instead on the growing refugee crisis. The Burmese military stands accused of burning Rohingya villages, systematic rape, indiscriminate killing and driving people over the border. The government of Myanmar, meanwhile, has absolved the army of any serious wrongdoing, prompting outrage from many countries and calls for some form of intervention.

In response, Wang and diplomats from 50 other nations gathered Monday in Naypyidaw as part of the Asia-Europe Meeting of foreign ministers. He quickly proposed a three-point plan to solve what Reuters has deemed a humanitarian "catastrophe". In the proposal, Wang suggested a credible "ceasefire" must first be reached before Bangladesh and Myanmar sit down to find a "workable solution for the return of refugees". Only then, he said, can a long-term answer based on so-far undecided anti-poverty programs be implemented.

The proposal was perhaps intentionally vague, as China and other countries in the region have so far shied away from any serious involvement in the appalling situation surrounding the Rohingya. Perhaps China's newfound diplomatic attention will lead to a workable solution. At least Myanmar's influential neighbor is no longer attempting to discuss old hydropower schemes.

So he suggested truce and then figure out what to do next. OK, as far as it goes.
Seems to me the problem is the Myanmar military, who've had over 60 years of experiences of privilege, corruption, uselessness and/or brutality and who have yet to be reduced to the level of ordinary people. Should have had the hell reduced out of them many years ago.

China typically does not interfere in the sovereign operations of other countries on the scale of say other superpowers.

That said - Burma basically missed their window of opportunity to provide energy to power starved China. Yunnan now has a significant surplus of renewable energy that required a Beijing policy to remediate.

We only know about the Rohingya based on rather biased western media coverage. Remember the "Arab Spring" which the media initially gushed over - not so gushy now that we're in the "Arab Winter", eh?

Best solution is probably to try to help the Rohingya settle in a sustainable and humane manner in Bangladesh because Myanmar seriously doesn't want them back. Perhaps POTUS Trump can outsourcing the Great Wall of the USA to Myanmar also...

This article also apparently neglected to mention that Myanmar is or was an Obama era pivot to "contain" China (an utterly moronic, unsustainable, and irresponsible global policy).

@michael: Don't know why you think that's the bet solution for the Rohingya, since it's not the one they want - just who might be legitimately authorized to implement such a policy? Anyway, it would not take care of the problem of the Burmese military.

"China typically does not interfere in the sovereign operations of other countries"
lol... isn't that exactly what they just did. AGAIN.
They only appear to take the Switzerland option when it's convenient these days.

Burma has had several ethnic cleansings a la Bhutan over the last century.

@Alien
Rohingya are a minority in Burma. Of course it's not the solution they want but it's most definitely the solution the current diverse majority of Burma want, otherwise the west's former darling of democracy SKY would've immediately denounced the cleansing as opposed to her deafening silence.

It's a big issue now simply because it's a political pawn between the USA's Obama era China containment strategy and China's strategy for direct land access to the Indian Ocean, to support it's OBOR strategy.

But how many of us REALLY know the religious politics of that area?