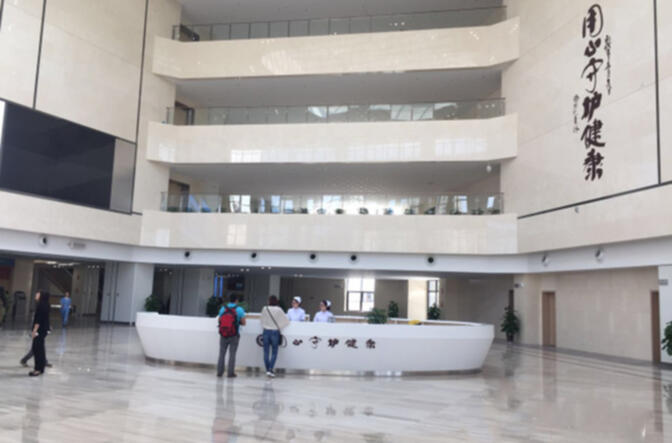 Much in the media — both here on GoKunming and in local outlets — is made of the enormous sums of money spent on subway lines, roads and high-rises in Kunming's city center and practically new places such as Chenggong. One area often forgotten is northwest Kunming, where construction is just as frenzied, and some projects are built in attempts to address the province's most pressing issues.

One newly opened example is Fuwai Cardiovascular Hospital, located in the far north of Wuhua District. The facility was jointly built by the Yunnan provincial government and Chinese Academy of Medical Sciences Fuwai Hospitals at a cost of 3.1 billion yuan (US$470 million). The state of the art medical center, as its name implies, specializes in non-communicable heart issues, the most common and deadly health issue facing Yunnan residents.

Cardiovascular diseases afflict one-third of all people living in the province, 36 percent of women and 30 percent of men. Heart ailments affect as many people in Yunnan as all cancers and respiratory diseases combined. And those numbers are on the rise, according to statistical aggregation company Graphiq. The situation in Yunnan reflects trends across China, where heart disease was characterized in a 2016 Harvard University study as a "national epidemic". The report read in part:

A 20-year rise in cardiovascular disease (CVD) in China appears to have been spurred largely by increases in high blood pressure [...]. Increasing body mass index, decreasing physical activity, a high prevalence of smoking, and unhealthy diet have also contributed to the growing burden of CVD — now the leading cause of death in China.

In Yunnan the factors causing cardiovascular ailments are similar to national ones, with the added challenge that many living South of the Clouds have no idea they are at risk. Many in the province have little or no access to properly trained doctors or modern medical equipment. To begin addressing this situation, the Kunming Fuwai hospital was built.

The medical center is one of only a few dozen public hospitals in Kunming. As opposed to the hundreds of private facilities around the city, public institutions accept a far larger range of insurance policies, making patient costs more affordable. The provincial government mandated that Fuwai be accessible to people of all socio-economic backgrounds, stressing preventative care over simply treating conditions once they have already developed.

Funded as part of the province's Thirteenth Five-year Plan, Fuwai Cardiovascular Hospital will service underserved neighborhoods in Kunming's north while also helping far-flung rural areas. The hospital is tasked with coordinating outreach, screening and preventative counseling programs in all of Yunnan's 16 prefectures. A special point of emphasis is identifying children with heart diseases at an early age, and then providing them with proper care.

Kunming is getting better and better.

Was the pun intentional?

Is this facility open and operational now, or still in the planning stages?

@gbtexdoc It is open, but not all departments. Just like restaurants and hotels, the hospital is having a sort of 'soft opening'.

Hopefully this will be a demonstrable success for those who need it, and as a state run hospital this is likely to be the case. Unlike the private and joint enterprises (Richland, Calmette) that appear to be mostly nice shiny buildings with an overarching accounts department.