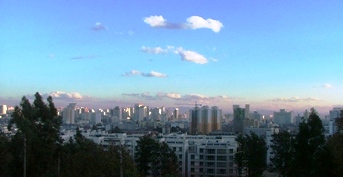 Kunming newspaper Dushi Shibao is reporting that beginning on the 27th of this month, Kunming will be the first city in China to have monthly 'No-car days'. After this month, private cars will be banned from entering the city's ring road between the hours of 9:00 am and 7:00 pm on the fourth Saturday of each month.

On September 22 Kunming was one of more than 100 Chinese cities to ban private cars downtown during the day. For twelve hours, downtown Kunming's streets were primarily occupied by buses, taxis, electric scooters and bicycles. The city's effort was one of the most successful in the country, while Beijing and Shanghai's no-car days received lukewarm reviews.

The private car ban will still apply to the area within but not including Huancheng Bei Lu, Huancheng Dong Lu, Huancheng Nan Lu, Xichang Lu and Yieryi Da Jie. In addition to being two hours shorter than September's no-car day, there is one other slight alteration - vehicles with at least 17 seats that are at least half-filled will also be able to enter the no-car area.

I am sorry but the last car free day in kunming I saw more cars than ever on the road. I feel that chinese people ar not that caring for environment. I walked out and did not take my motor bike only to be almost run over by so many cars and trucks on the roads of this over driven city.

If they'd do something about the buses and trucks that belch an amazing amount of black pollutants, there would be a notable improvement in the air quality. No car days in a small part of the city on one day of the month is like putting a bandaid on a gaping wound.

Also, how about a no horn day; that would be a pleasant change and quite a relief.

Seeking a good lady for date