Saying goodbye to old friends: The ballad of Cas and John 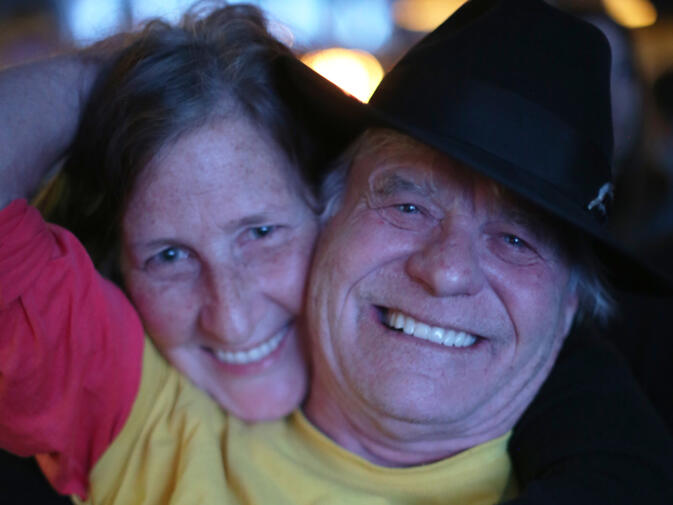 If you've lived in Kunming at any point over the past decade, you've probably met them. They are pillars of the city's live music community, a gregarious and fun-loving couple susceptible to hanging out with people half their age and having a blast while doing it. They are Cas and John. And after a glorious 12-year run of Spring City madness, they are leaving. And that sucks.

Cas first came to China in 2001 from Australia, where she had worked as a catering manager at a hospital in Perth. Once in China, she settled as a teacher in Zhengzhou, the provincial capital of Henan. Two years later John — known to many these days as Nevada — showed up in the same city after nearly 30 years as a school teacher in the United States.

The two met at a Christmas party in 2003. It was not, according to both, love at first sight. But over time the Aussie and the American cowboy got together and hatched a plan to leave Zhengzhou and its lovely combination of blazing summers, frigid winters and smoggy skies. They sought out and found good job opportunities in Kunming, drawn by the weather and tales of China's wild west, and moved to Yunnan in 2005.

It was shortly after arriving that John announced one evening he was going to play a gig. What gig? Cas wanted to know. Only then, after more than two years together, did John reveal he was a musician. What kind, and how good, Cas would have to wait and find out. That night they ended up at a place called I Am Living on Wenlin Jie, a divey bar with cheap beer, copious amounts of cigarette smoke and an appreciative and enthusiastic audience. To a packed house, John strummed his acoustic guitar and belted out Blues songs into the otherwise hushed Kunming night. 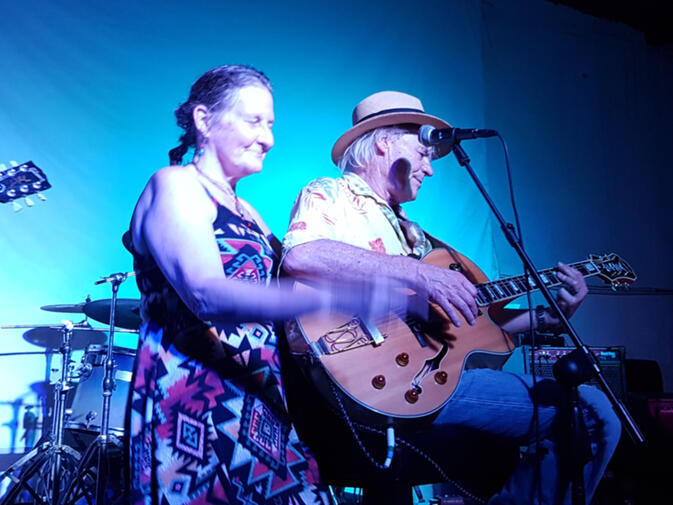 The rest, as they say, is history. Cas and John fell in with a group of musicians, sharing their love of live music by night and teaching during the day. They were married in Dali in 2007, surrounded by an ever-growing, eclectic and sometimes wild family of Yunnan miscreants and foreign castoffs. Life was good. Until...

Oh wait. There is no tragic hook to this story, no monstrous and bedeviling hurdles to overcome. This ain't no elegy. John has been the frontman or guitarist for six bands during his Kunming tenure — Nevada and the Amigos, The Tribal Moons, War Horse, War Whores, Nevada and Ian Blues Duo, and Nevada and the Yucca Nukes. He has always favored Blues and country and western tunes, but through the years has been afforded by the bands and the copious amount of talent around him to dabble in punk, funk, metal, glam and traditional Chinese music.

Through hundreds of shows, a national tour of China and stints in Guizhou, Henan and random little towns across Yunnan, Cas has been with John. She is quick to point out she is no groupie. Instead, imagine her as an agent, muse, manager, counselor, interpreter, roadie, provocateur, bouncer and therapist all rolled into one. Cas also provided the motivation — along with Mark Corry and Jan Hassmann — for John to record an album. The three dragged him, kicking and screaming, to the studio for months on end, Herculean efforts that eventually led to the 2015 release of the album Rocket Chair.

Cas has also been an incredibly important part of every foreigner-organized fundraiser over the past ten years. There have been well more than a dozen of these occasions. They started out small and have grown larger and larger. But through all the craziness of booking bands, finding venues, the sound checks and the passed-out performers in need of a nudge, Cas has been there in the middle. Those events have raised in excess of 750,000 yuan combined, and she is a major reason why. 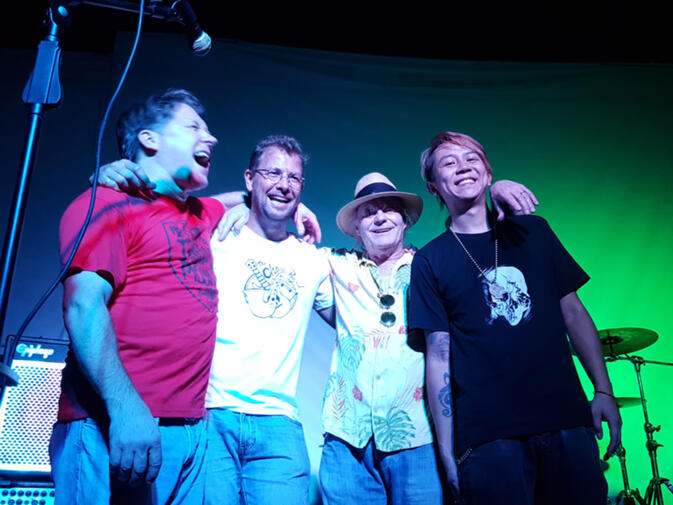 We asked Cas and John to relate an anecdote from their time here in Kunming, one that would sum up best what it was all about, how it felt and how the city and their experiences in China have changed them. They mulled it over, explaining that the shows with the Quebec Redneck Bluegrass Project were some of the most memorable, if only anyone could see through the haze of time and booze to recall any of them. Instead, they both agreed on this one story:

Several years ago in Lijiang, at the conclusion of a month of contracted shows, the Tribal Moons Country Trio had just finished up their last set. They — John, Matu and JP —gathered around the bar to celebrate a job well done. A line of tequila shots appeared. John interjects at this point in the tale, "Now, I don't really do shots, and anyone who knows me knows not to give me too many." Everyone gathered around and dutifully downed their drinks. John immediately felt sick, bolted for the door and "right in front of the bar, by one of those nice little canals, I let fly," he says.

In the violence of his retching, along with the tequila and god knows what else, John's false teeth were launched into the winter sky. Like "it was in slow motion", John lunged forward and with his right arm outstretched, managing to catch his dentures before they landed in the stream. It was, John says, "miraculous". He ran back inside to relay the story, and while re-enacting it his teeth once again went airborne. The miracle catch was repeated as well, this time to applause.

So there you have an encapsulation of the past 12 years with Cas and John. History, tragedy and comedy all wrapped into one, just as Shakespeare would have liked it. Cas and John are moving on to retirement now, to the north of Thailand where they have a lovely apartment with a pool. There they can sip cocktails to their hearts' content and Cas can keep John from drowning. They've earned it and we wish them all the best. If you see them over the next few days, you should too. 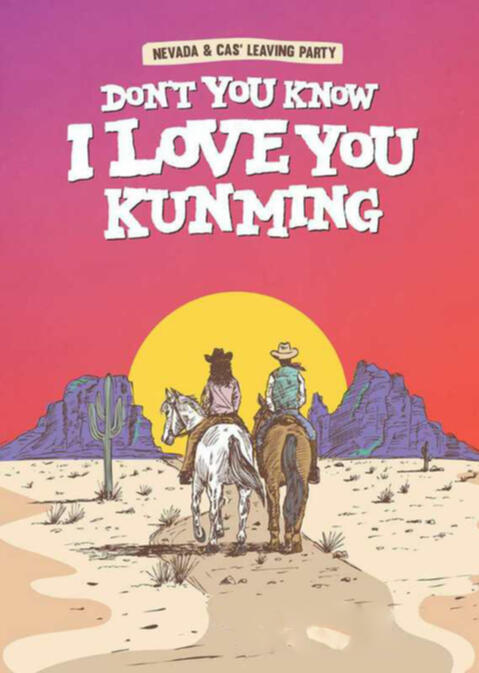 Oh yeah brother, fair winds and rocky tunes. We'll all be down there soon to visit. Great article Pat, and a nice shot of Charlie's roaring laugh.

Many of us who were around in the early 2000's are well aware of just how important John and Cas have been in the development of the local Western-derived local music culture - over the past 13 years there have been others as well, whom I do not mention here by name, despite their significance, simply out of a desire to be brief - but those who have come later and are not all that familiar with this development should understand that the Kunming laowai scene they found on arrival was the product of a lot of people and events that should entire history as we should know it.
I occasionally go to Chiang Mai, and I do not for a moment believe that this story, of music and enthusiasts and good irrascible performers, has come to and end - it's just spreading out.
Stories come to an end, but people are part of a longer phenomenon that does not.

First, a disclaimer; I'm their son... BUT... The funny thing is, you'd think they would have told me the extent of their help. But as such humble, giving and loving people, hardly a peep.

I've been involved in the music industry in Australia for the better part of my life, and worked on many a fundraiser, but i still could only dream of contributing so much back to the community.

It's just what they love doing - helping those in need - and one of the many reasons I love them so much.

So proud of you guys, and can't wait to visit you in Chiang Mai and see what you've already achieved in the six months that will have elapsed by the time I get there. And all the wonderful friends you will have made, which I've been lucky enough to meet many of the Kunming friends and know Caz and John will miss you deeply. x

Much love to you two crazy cats. We'll certainly miss you and we're all better for knowing you. See you soon down south.

Kunming will not be the same without you! You were one of the first people I met when I came to Kunming and John you were my motivation and inspiration to dedust my guitar and start playing again. Thank you do much for the wonderful shows and the time we spent together. I wish you the best of luck in your new home and I am sure that we meet again. Ralf

Godspeed John and Cas. I hope you can make Thailand as much of a home as you did with Kunming. That special signed booklet from in front of Diego's place was one of the few things I kept from China. Cheers from another mountainous city across the globe.

We only spent one year in Kunming, but became great friends with these guys in that short time. We'll never forget Nevada serenading us in the Indian restaurant on Wenhua Xiang and insisting the staff give us a romantic dinner. One of the funniest moments in our time there. Then there were all those amazing nights full of music and good conversation at Sal's or wherever it was we were hanging out. We still think it was Nevada's good luck charm that got us tickets to the Grateful Dead 50th anniversary shows in the lead up to our wedding. You guys are Kunming legends and the city, along with all the people who know you, are gonna miss the hell out of you guys! We could use another Thailand trip, so don't be surprised if you see us sooner than later. Best of luck guys! -Sasha & Rachel

Looking forward to seeing you both in Chiang Mai and enjoying your music again. Please check in with me for any help making the transition here. I'm a 10 year Chiang Mai resident after more than 20 in China. Cheers! Chris

Best wishes for a great future in Chiang Mai and thanks for your roles in helping make Kunming a great place to live. You will be missed.

John and Cas, I'm bummed to hear you're leaving Kunming before I made it back there, but I'll definitely be stopping by to see you in Chiang Mai. Thank you for your warm embrace and all the fun times and great music you shared!

Cas and I would like to thank everyone for their lovely comments on the article Pat wrote about us in regard to leaving our home and Kunming family after all of these wonderful years we spent there. It's been a difficult decision and move. Many people we have met and developed friends with have inspired us, helped us, encouraged us and shown us their kindness. We will always remember the people and memories we have of our very special 12 years in Kunming. Love you all!
Nevada